A Bluetooth device has become an obvious add-on to most bikers’ helmets. It is useful for solo, two-up, and group riders alike. We got SENA before we left on the trip, with one main reason in mind: a Bluetooth device makes journeys less boring. However, after being on the road for more than 13 months, we have learned that there is much more to it, other than simply cutting off boredom.

Our Bluetooth keeps us connected when getting things done

– Especially when using a modular, half or crossover helmet.

This might be getting groceries, looking for accommodation, or simply taking a photo of each other from a distance. Our Bluetooth device allows us to communicate easily without going back and forth. In Pakistan, we had stopped to look for accommodation in a dodgy area and I waited next to the bike until Daryl was trying to sort out a place to stay. The fact that I could still talk to him in case something happened kept our mind at rest.

We got each other’s backs

Whilst crossing borders from Iran to Pakistan, two Interpol Officials interrogated me. As soon as I went into the room, they shut the door and Daryl was outside. Until I understood what was going on, I stayed with my helmet on so that Daryl could hear everything. After a while, I took it off and held it close and he could still follow. If they interrogated him, too, he would have known everything that I said and would have been able to confirm my answers.

We can support each other instantly

When we were riding the Maranjab desert in Iran, we kind of lost our way and ended up riding the bike fully loaded in the sand. At one point, I got off the bike and Daryl was riding on his own whilst I followed on foot. Suddenly, I saw him tip over. I wasn’t aware of what was going on until I heard him shouting for help as his leg was twisted and stuck underneath the pannier. I ran as fast as I could and managed to lift the bike up just a bit so he could get his foot out. It would have taken much longer for me to realise what was happening otherwise.

This was also very helpful when we were riding Ladakh, India, and we had to go through various river crossings. Having clear communication comes in handy in situations where both of us need to be agile and responsive.

General observations on the road

As a pillion, I can act as an extra pair of eyes and easily point out to Daryl anything happening on the road, especially in the crazy traffic of countries like India, where people, cows, dogs, trucks, and Tuk Tuks share the road in the most chaotic way you can imagine!

We make the most of the long journeys

So many conversations happen on the road! We laugh, we fight, we discuss plans from our trip, and everything in between. It would be very boring, especially for me as a pillion, not to be able to communicate on the road. It is also amazing to be able to share moments whilst riding that would be hard to do so without the Bluetooth. 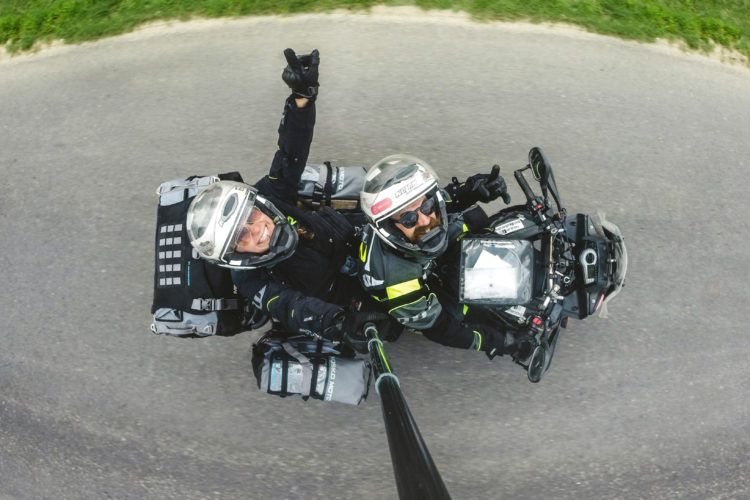 Touring Industry
Diversification: That is the name of the game

Riding Ecuador: Andes and the Amazon

Lyndon Poskitt
Do You Have a Plan?