The BMW R 18 Cruiser is here.  The German motorcycle manufacturer unveiled its latest creation in a 24 minute Livestream video.  It’s black, it’s swoopy, and it has a big boxer engine between its frame rails.

While the video itself did not disclose much in the line of the machine’s specifications, it did feature a storybook-like presentation of the machine and some of the people involved in its development.

You can find the rollout video here:

However, BMW Motorrad’s press kit provided some of the spec details that riders want to know.  BMW highlighted the following specs:

BMW says that the R 18 borrows from the firm’s R 5 both technologically and visually.  They claim that the R 18 shifts the focus back onto motorcycle essentials, no-frills technology, and the boxer engine as the bike’s centerpieces.

While the R 18 features a boxer engine, it is a new design that BMW calls the “Big Boxer.”  It’s their most potent boxer engine since BMW Motorrad began production in 1923.

Cradling the “Big Boxer” is a double loop steel frame and rear swingarm with an enclosed axle drive giving a rigid frame look.  Similar to the R 5, the R 18’s swingarm surrounds the rear axle transmission in an “authentic” style using bolted connections. 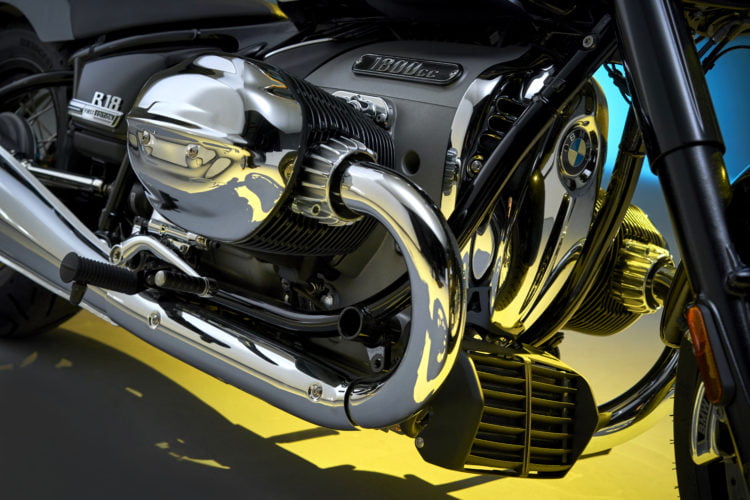 BMW says that it deliberately dispensed with electronic adjustment options.  Instead, they used a telescopic fork and a directly mounted central suspension strut with travel-dependent damping and adjustable spring preload.

The R 18’s fork uses 49mm tubes that provide 120mm of travel.  At the rear, 90mm of travel is available.  Up front, the machine’s braking duties are handled by a twin-disc setup, while the rear gets a single disc.  Four-piston calipers grasp all.  Rounding out the R 18’s suspension components are wire-spoked wheels. 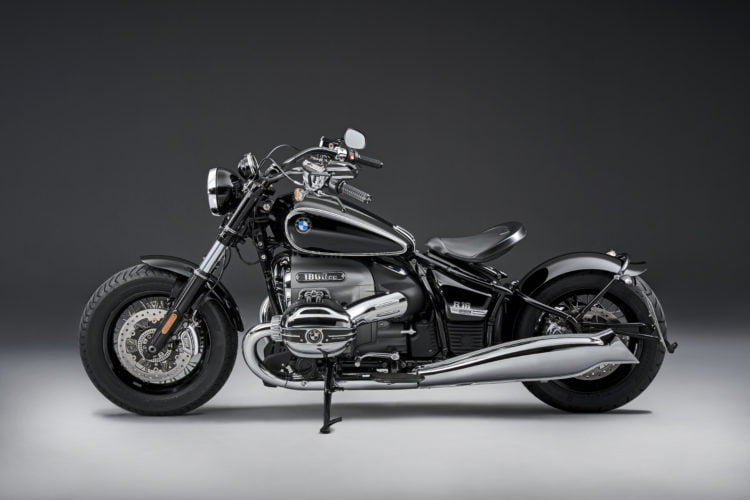 Special seats like this one can provide that old “hardtail” look.

Although BMW says that the R 18 has no-frills technology, technology does reside in the bike.  The R 18 features three riding modes, which for some reason, they’ve decided to call; “Rain,” “Roll,” and “Rock.” These settings can be used to adapt to individual rider preferences or conditions.  OK, perhaps they mean the modes are set to provide rain, street, and sporting ride parameters.

Knowing that the R 18 is designed for a market where riders like to customize their machines, BMW has been careful to make it easy for R 18 owners to do just that.  The R 18 has an easily removable rear frame and an easy to remove painted part set. 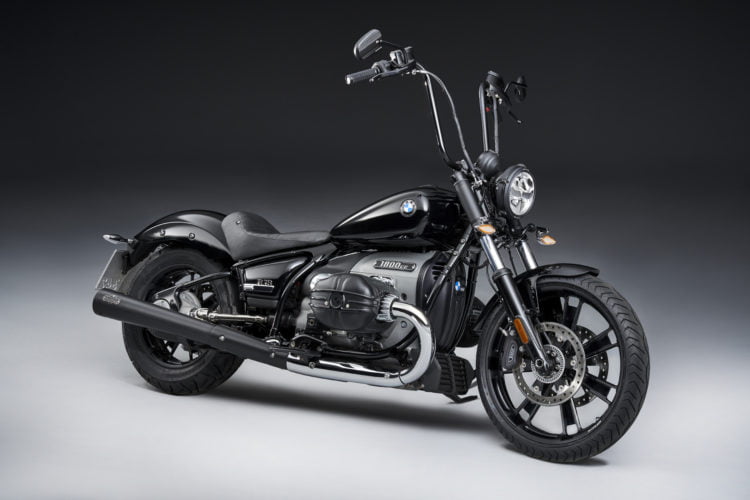 There are many different accessories for the R 18 like these ape hanger bars.

BMW says the attachment points for the brake and clutch hydraulic lines, as well as the cable harness, have been designed to allow easy installation of higher or lower handlebars in conjunction with matching hydraulic lines and cable harnesses.  Visible valve covers (cylinder head covers) and the belt cover (engine housing cover) have also been designed to ensure that they are located outside the oil chamber, making them very easy to change.

If you are into customizing your machine, BMW has made sure that there are plenty of custom parts available.  There is already a wide range of BMW Motorrad accessories to allow individual customization of the R 18.  In addition, BMW has partnered with Roland Sands Designs to bring a variety of “machined” and 2-Tone-Black custom parts.

A “classic” single instrument provides all the R 18’s data.

BMW’s customization plans called for partnerships with not only Roland Sands Designs, but also several other well-known accessory manufacturers.  US-based Mustang Seat will offer different versions of hand-made seats.  If you are looking for a different exhaust setup, BMW has partnered with Vance & Hines to add to your customizing potential.

The R 18 represents a fresh new cruiser design for BMW.  The concept models received significant acclaim in the cruiser community.  It will be interesting to see how the production version fares going forward.