What will the future look like for BMW Motorrad? Maybe, it’ll look like the Vision DC Roadster. At least, that’s what BMW said at the NextGen event in Munich this week.

For a few months now, BMW has been letting out hints about its plans for future electric motorcycles. Although it already has the C Evolution electric scooter in the lineup in some markets, BMW has yet to announce a production electric motorcycle. There are many reasons for that, but when it happens, expect to hear the usual complaint from traditionalists: “It just isn’t the same.”

Well, duh. Your current gasoline-powered Beemer is a far cry from the original airheads, too. But to keep at least a measure of tradition, BMW designed the Vision DC Roadster to emulate the lines of its boxer-powered machines. 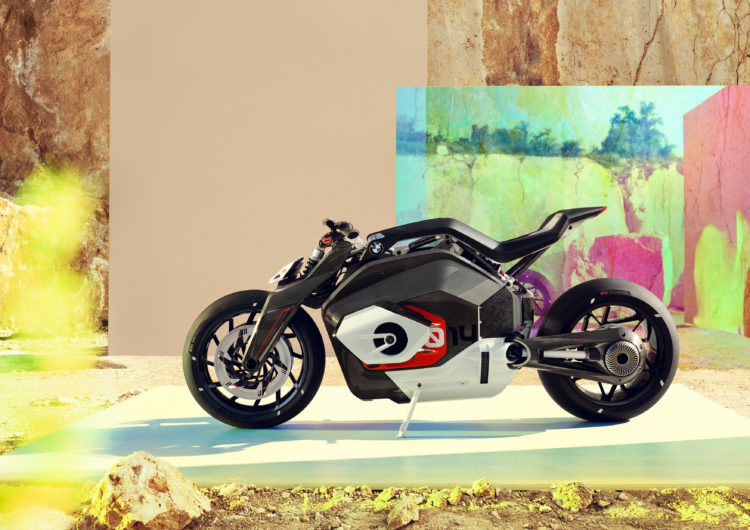 To do that, BMW mounted a vertically-fitted, longitudinally-oriented battery, with cooling ribs and integrated ventilators at the ends. This whole array drops into the motorcycle in the space you’d usually see occupied by a flat twin, therefore achieving something close to classic BMW lines.

The electric motor itself is shaped like a cylinder, and mounted underneath the battery, directly connected to the driveshaft.

BMW hopes that this design “visually echoes the history of BMW Motorrad while at the same time taking it a step further.” Or so says the press release.

What of the other details? When BMW unveiled the concept bike, it made no mention of battery capacity, recharge time, or of motor output. And of course, as this is just a concept, there was no talk of a release date. The presser did mention a milled aluminum frame, carbon-fiber, and other exotic materials, but certainly nothing you wouldn’t expect on a bike like this.