“The Marine Corps taught me commitment, courage, focus, and a value system that can easily suffice for people like me who aren’t religious.” – Bob Lutz

The rider of the S 1000 RR waiting at the traffic lights diagonally opposite me gave the bike I was riding a cursory glance and then concentrated on his various electronic readouts, LED lights and other bling until the lights changed and he could screech away. 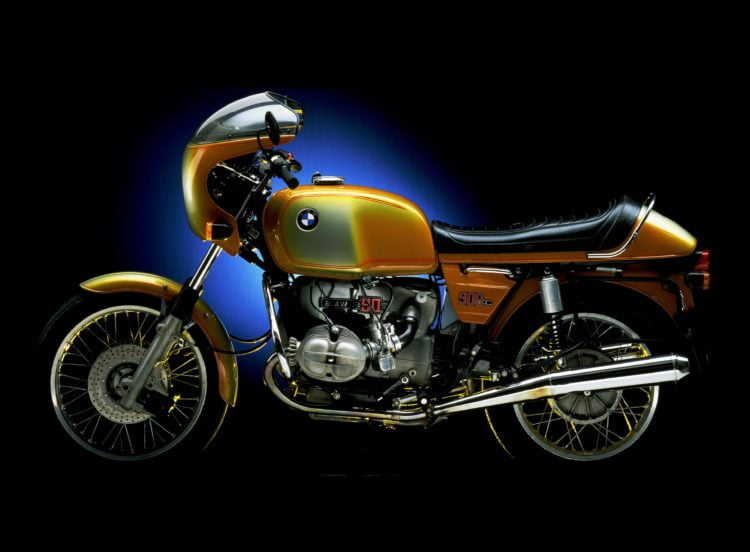 The R90S is still one of the most classically beautiful motorcycles ever made.

The bike I was riding, my recently-acquired Silver Smoke R 90 S, might not have been the first ‘superbike’ but it was one of them, and is the ancestor in a direct line of that S 1000 RR. Without it, there might well have been no BMW motorcycles today. BMW introduced this air-cooled twin in 1973 for the 1974 model year, and though it is pretty tame by today’s standards (for S 1000 RR riders, anyway) it was radical stuff then. Let’s not forget that Reg Pridmore won the 1976 U.S. Superbike championship on a stock-looking R 90 S.

It did not take the press long to catch on, either. One often quoted review at the time (I’ve never been able to find the original) summed it up pretty well.

“The R90S handles and stops almost as well as the best Italian sportster; is almost as fast as the fastest Japanese road burner; almost as uncomplicated as the good old British twin; and almost as smooth as the best multi. When it comes to comfort, and capability for traveling at maximum speed with minimum fatigue, the R90S is second to none.”

In other words, while there were many bikes that did one thing superbly, the BMW was the only one that did everything very well. And you know what? It still does. But it so nearly didn’t happen, except for one man.

In 1972, the motorcycle business was in trouble. Fortunately, the Bavarians called in the Marines – or at least one of them. The near-legendary Bob Lutz was hired as BMW’s automobile sales manager.

“All the pressure from within the company regarding motorcycles at the time,” Lutz remembered, “and especially from the finance guys, was to shut down the bike business. Many in upper management wanted to just kill it—or at least sell it.”

For good reason. The Japanese were making bikes like Honda’s magnificent CB750, while BMWs were stodgy looking, built with dated technology, and appealed to older riders, not the (then young) cashed-up baby boomers who ruled the motorcycle market.

“When I joined BMW in ’72, the company was building about 200,000 cars annually and only 10 to 12,000 motorcycles,” Lutz says. “Pretty insignificant volume, really. Our US volume was declining, with most sales to police and federal agencies. Retail was nearly non-existent. The Japanese had all the cool stuff: overhead cams, multi cylinders, disc brakes, advanced and sexy stuff. We just didn’t have it, and were treated as a bit of a joke by the magazines. They’d write, ‘BMWs…nice touring motorcycles for elderly people,’ and stuff like that. Not a reputation that boded well for the future.”

It’s worth noting that Lutz, despite working for BMW, had his own Honda CB750 – and a pretty fast one, by all reports.

Believe it or not, even the Japanese manufacturers were worried about BMW, and not because the Germans were credible competition. They saw the company as a worthwhile symbol of respectability for the entire industry. One senior Japanese executive at the time said something like, “If it looked as if the BMW motorcycle division was going to close, we would have a quick whip around to make sure it is saved.”

I’ve never been able to find the quote again, either, since I first read it, although I’ve had it confirmed off the record. We don’t know whether they would have done it, but they didn’t need to because the R 90 S did it for them. So always remember, all of you who reckon it was the R 80 G/S that was the true saviour: it may have done it figuratively, but the R 90 S did it literally. Without this bike, there would be no BMW Motorrad today. 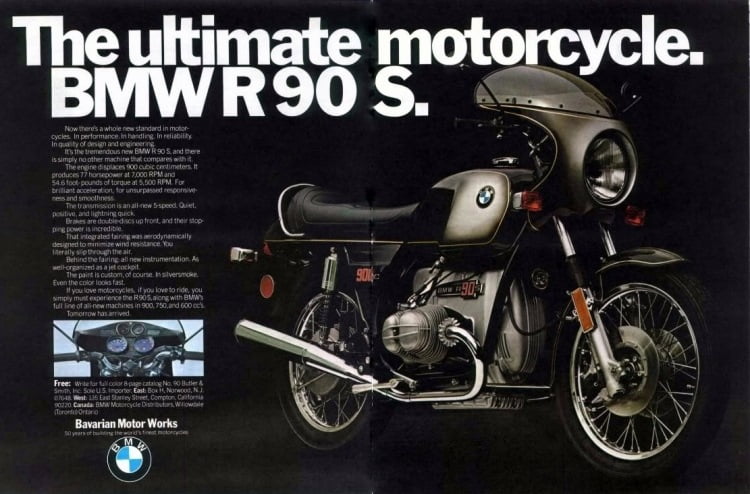 Even the R90S advertising showed a new, confident spirit at BMW.

“Literally no one was in charge of the motorcycle division,” Lutz continues. “Part was controlled by sales, part by engineering, part by design, et cetera. The group was basically leaderless and had very little in the way of resources. So I asked my boss if I could pull things together and give the division some leadership. I told him they were desperate for a direction, a plan. He said okay but added this: ‘Just don’t ignore the job we hired you for!’ So I called everyone involved with motorcycles together and pretty quickly hammered out a plan, which everyone agreed to.

“We decided that we’d send a signal to the Japanese that we were back in the bike business with a high-priced, premium motorcycle that enthusiasts would really want,” Lutz said. “Right off we decided on a larger engine, and 900cc seemed right, as there were all sorts of 900cc kits on the market already. It’d have disc brakes, a five-speed gearbox, and beautiful detailing everywhere. 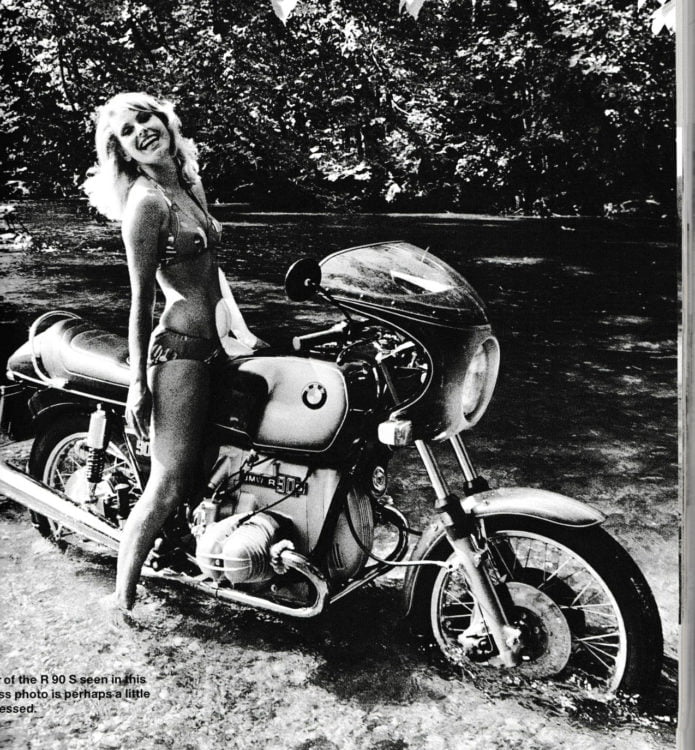 The PR photos for the new bike explored new territory for staid old BMW, too.

“It wasn’t easy to sell it to upper management,” Lutz remembers. “Most thought we should shut down the motorcycle division entirely, as it wasn’t making any money. But because we could use much of the R75/5’s foundation for the new bike we’d envisioned, the investment wouldn’t be huge. So they agreed. We just needed to make it look right.”

Which brings us to the other father of the R 90 S, Hans-Albrecht Muth. He had been a toolmaker, then an industrial stylist before being hired by BMW to work on car interiors. Fortunately, Muth was also a motorcyclist. He went to see Hans-Gunther von der Marwitz, who was as close as there was to a motorcycle development manager at BMW.

“I knocked on his door, walked in, and got some gruff questions right away,” Muth said. “‘Who are you? What do you want?’ he asked. ‘Who does motorcycling styling here?’ I asked back. ‘We do,’ he said. ‘Why do you ask?’ – ‘Well, that’s why our motorcycles look the way they do!’ I said.”

“All right,” said von der Marwitz, “you do it!” That was just what Muth wanted to hear.

“It was amazing and so German: chop, chop, right to the point. So I immediately got a second job, unofficial of course, and in the coming months I had to hide my motorcycle work from my real boss whenever he would visit the studio.

“A few days later,” he continued, “Von der Marwitz asked me to see Lutz about the motorcycle designs we’d talked about. Lutz was moving into his new office and had already put a large poster of a beautiful racing motorcycle on his wall. He told me the company was already working on a new generation of bikes and did I have an opinion how a premium, sporty German motorcycle should look. He pointed to the poster, looked back at me with a cigar in his mouth, and smiled. ‘Yes,’ I said. And with that I headed back to my studio. It wasn’t a long meeting.” 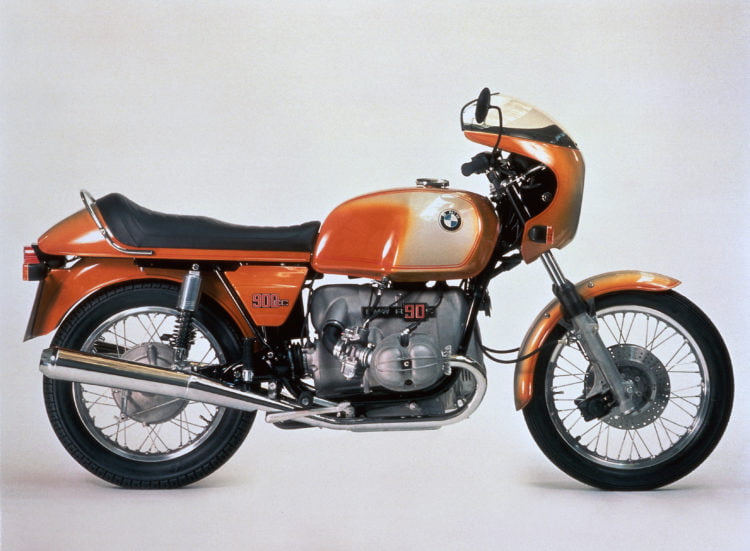 It didn’t take Muth long to get his ideas down on paper. He created three alternative sketches, one of which would become the R 90 S just a year and a half later. “It was sporty and had a big tank,” Muth said, “and would carry two riders in comfort. As far as the overall shape, I sketched it exactly as I envisioned a modern BMW should look, with a sporty tail in the spirit of the classic English racing bikes. But what it needed most, I thought, was a face, like an automobile has a face. And that idea, along with the small racing fairings of the day, is where the idea for the cockpit fairing came from. [Muth was to use the same line of thinking when he designed the Suzuki Katana.] Also, just as a fighter pilot needs a place to relax and concentrate on what’s coming, whether enemy or weather, the new bike needed a cockpit and instrumentation tucked behind that wind-cutting fairing—gauges, and such, and a clock too.

“The two-tone color scheme of the first R90S came easily to me,” he continued. “Black had been BMW’s only color until the R75/5 came along in ’69, but during S-model development I remembered a bicycle I’d painted when I was 13 or 14. It was black but had a silver section. And as I thought about it, it was perfect. The black would recognize the past and BMW’s history, while the silver would represent the future, where BMW was headed. Melding them as we did was very difficult when it came time to paint the production bikes, and we had a lot of help from the very talented women we hired to do striping and such. But it was worth it, as the color ended up being very popular.”

I’ll leave you with Bob Lutz. “What followed the R90S was a willingness on the part of upper management to invest in the motorcycle business, and that allowed machines like the R100RS, the GSs, and the K- and R-series bikes to come later,” Lutz said. “Suddenly, after the S-model took off, there was a more adventuresome spirit within the company, more boldness. We see that to this very day, and it all came from the R90S.”

Tools You Should Own
Metallic, Permanent, and Paint Markers