“All I need is the air that I breathe,” sang Albert Hammond on his 1972 album It Never Rains in Southern California. He might be advised to be careful where he indulged if he was singing today.

In a 2019 King’s College London study, some 250 pupils carried special backpacks with state-of-the-art Dyson air quality sensors on their journey to and from school in various London boroughs. The backpacks measured fine particulate matter (PM2.5) and nitrogen dioxide (NO2) levels, for a week. 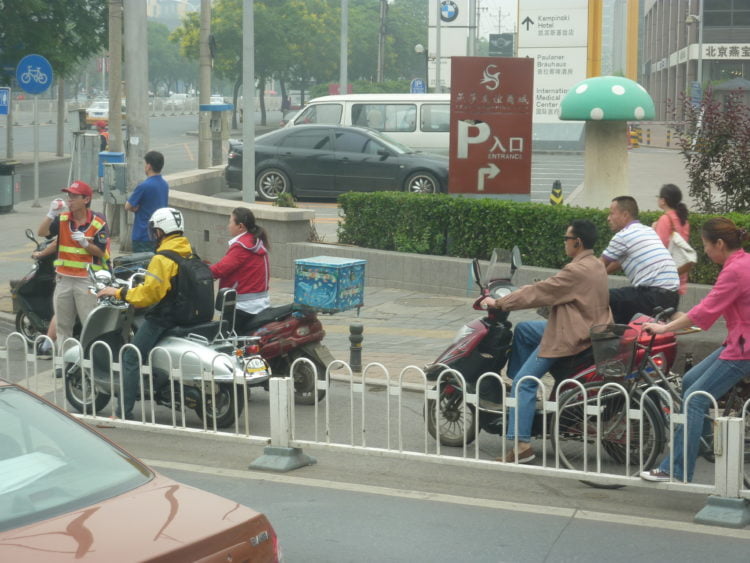 A traffic stop in Shanghai, where internal combustion engined two-wheelers are now banned. But so are electric ones.

The resulting data, analysed by scientists at Kings College, revealed that the highest concentrations were recorded by children walking along main roads. Pupils were exposed to on average five-times-higher concentrations of harmful NO2 pollution on the school run than when they were at school, as well as higher PM2.5 concentrations. For both NO2 and PM2.5, children who walked to school by backstreets were exposed to the lowest levels of pollution, and pollution levels were actually higher in cars and buses than on back streets.

So what? Well, even healthy people can experience health impacts from the kind of polluted air that the study found along main roads “during… outdoor activities”. The immediate health problems from high air pollution levels can include aggravated cardiovascular and respiratory illness, damaged cells in the respiratory system with loss of lung capacity and decreased lung function, accelerated aging of the lungs and the development of diseases such as asthma, bronchitis, emphysema, and possibly cancer. Finally, exposure is likely to result in a shortened life span. 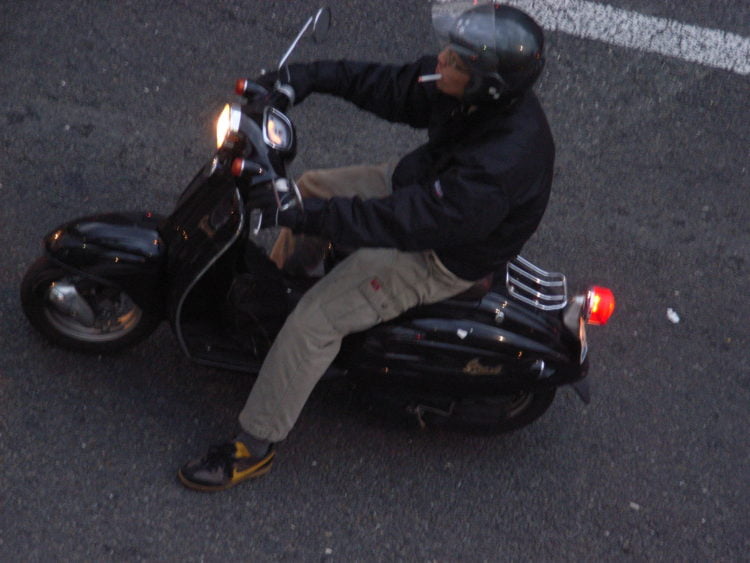 This bloke in Tokyo has obviously given up on saving his lungs.

As motorcyclists, riding in the city or even on the superslab exposes us to this crap air. Specific pollutants include ground-level ozone, which is formed when volatile organic compounds (VOCs) and oxides of nitrogen (NOx) react with the sun’s ultraviolet rays. The primary sources of VOCs and NOx are mobile ones, including cars, trucks, buses, construction equipment and agricultural equipment. Ground-level ozone reaches its highest level during the afternoon and early evening hours. High levels occur most often during the summer months. It is a strong irritant that can cause constriction of the airways, forcing the respiratory system to work harder in order to provide oxygen.

It can also cause other health problems including aggravated respiratory disease such as emphysema, bronchitis and asthma, reduced resistance to infections and increased fatigue along with wheezing, chest pain, dry throat, headache or nausea and eventually lung damage, even after symptoms such as coughing or a sore throat disappear. 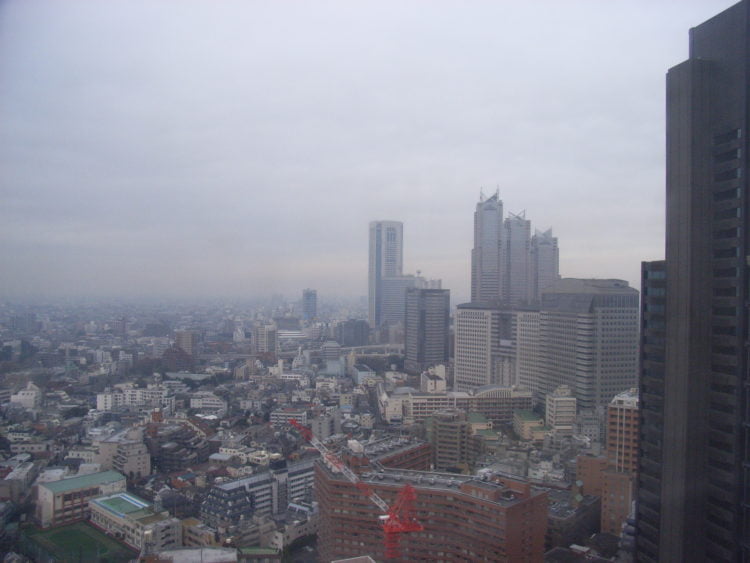 It looks bad higher up, but the worst pollution is at lower levels.

Particulate matter, found among other sources in wildfire smoke, is a complex mixture that may contain soot, smoke, metals, nitrates, sulfates, dust, water and tire rubber. It can be directly emitted, as in smoke from a fire, or it can form in the atmosphere from reactions of gases such as nitrogen oxides. The size of particles is directly linked to their potential for causing health problems. Small particles (known as PM2.5 or fine particulate matter) pose the greatest problems because they bypass the body’s natural defenses and can get deep into your lungs and potentially your bloodstream. Exposure to such particles can affect both your lungs and your heart.

It only takes short-term exposure, even if you are healthy, to particulate pollution to cause asthma attacks and acute bronchitis, increased susceptibility to respiratory infections and even heart attacks and arrhythmia in people with heart disease. 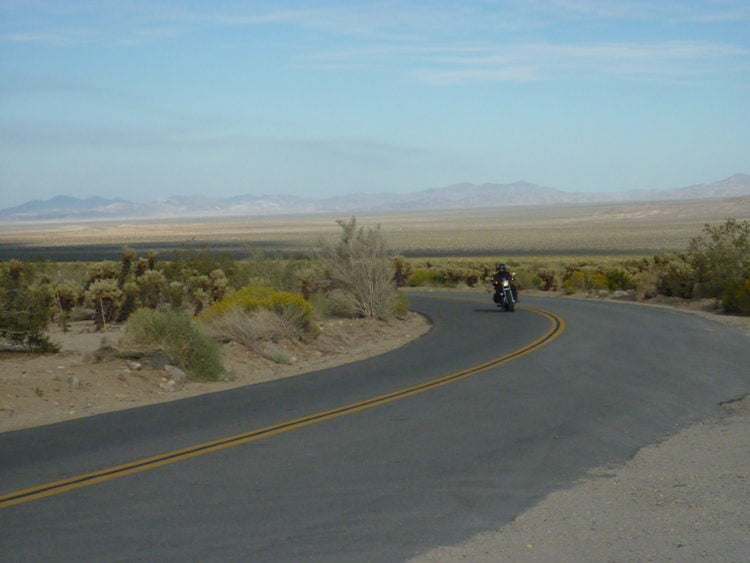 Those are only two of the major polluting agents. And many of us, including me, ride in this crap every day. It almost takes the edge off the Coronavirus. 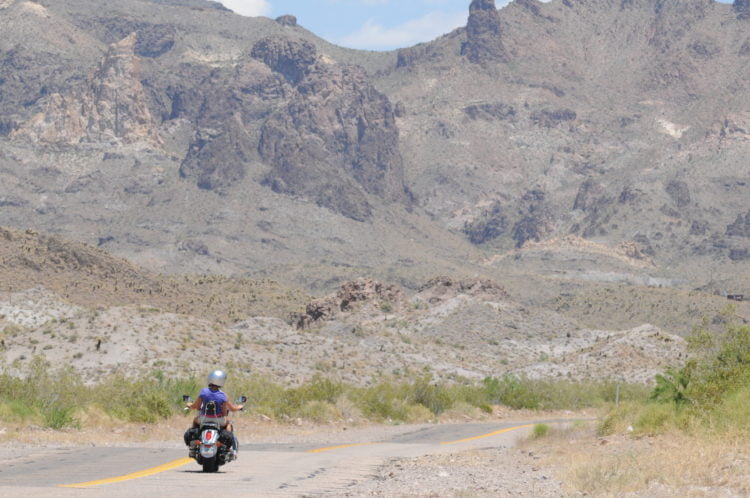 And so is this, even if there is a bit of haze!

There’s one thing I can tell you for sure: adventure riding, out and away from the roads, gets more attractive every day.

Travel
Meeting Overlanders on the Road