Backcountry campfire chef takes on the Southwest, packing superlight doing it his way after hard winter seasons keeping others stay safe, this is Joe Motocross

The southwest seems a popular destination for you, why?

Just dumb luck.  I moved to Colorado in 1987 to be a ski bum and then to Utah in 89.  I live in an obscure town right in the middle of the state.

I quickly learned about the vastness and freedom of the mountains and deserts of the southwest. 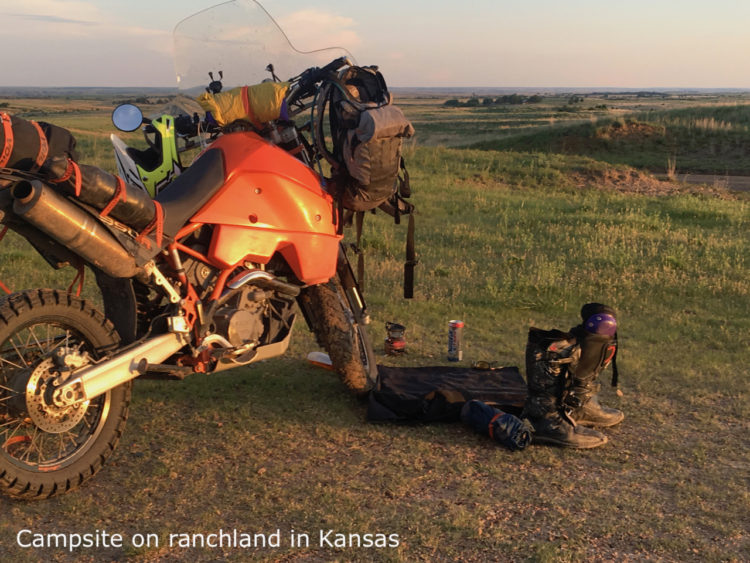 I very much like to be able to pull over almost anywhere I want, call it a day, sip a little whiskey and go to sleep in the dirt.

That’s hard to do east of Denver although I have done a couple of trips across The Plains borrowing some land from a rancher or two without them knowing.  I must say that adds a little adventure to the ride but I prefer the southwest.

How long do you plan until you pull out of your driveway?

Sometimes less than 24 hours.  That’s the best thing about living where I do.  I keep the gear ready and whenever the opportunity presents and the weather looks good, it’s easy just to roll out. 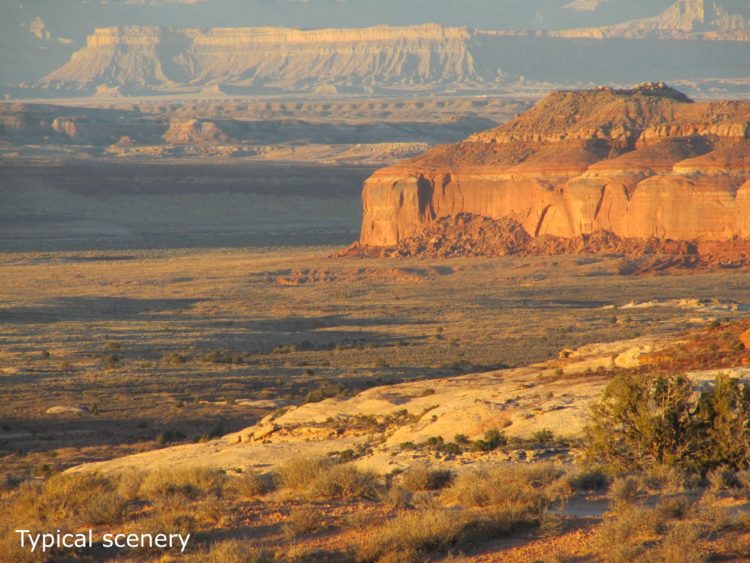 Sometimes plans will be made a couple of weeks in advance but they are always loose and weather dictates where we’ll go.  “Planning” is a very loose term for what happens when I get ready for a trip.

What do you feel is the optimum time for a trip, for you and why? 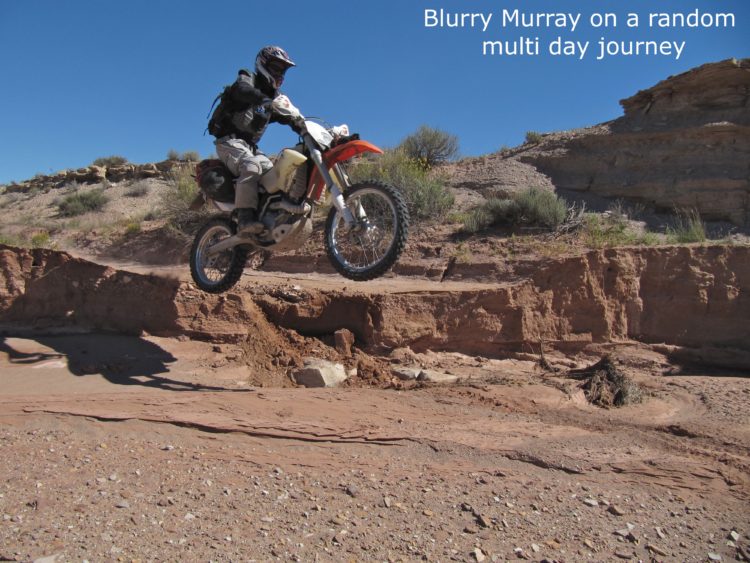 Light packing, you go lighter than most, enlighten us? (The strap system you use, I can’t remember the name)

Yes.  This is the holy grail for me.  This is where I find total freedom and release of everything in this world.

My uncle used to say “everything you own owns a piece of you”. If you don’t have stuff with you, you don’t have to deal with it.  It allows the bikes freedom also. To perform at their peak without being bogged down.

This allows you more freedom of where you can ride.  It opens up more routes. The rule is bring enough clothes to keep warm and nothing more. No extra socks, underwear, pants, etc. Wash things in a creek if you need to.

Tents are generally frowned upon. Too bulky. Tarps are small and more versatile. Bivouac sacks are good in place of a tarp.

Chairs are literally laughable. Anyone knows that your front wheel makes a great backrest.

The small amount of gear we bring all gets put into a few stuff sacks and strapped to the bikes with Voile Straps. These are the ultimate motorcycle straps.

This method keeps the bikes super light and you can ride them almost like you’re running a desert race.  Generally no stoves, we cook on the fire. Keep it simple. People would be amazed at what they don’t need. 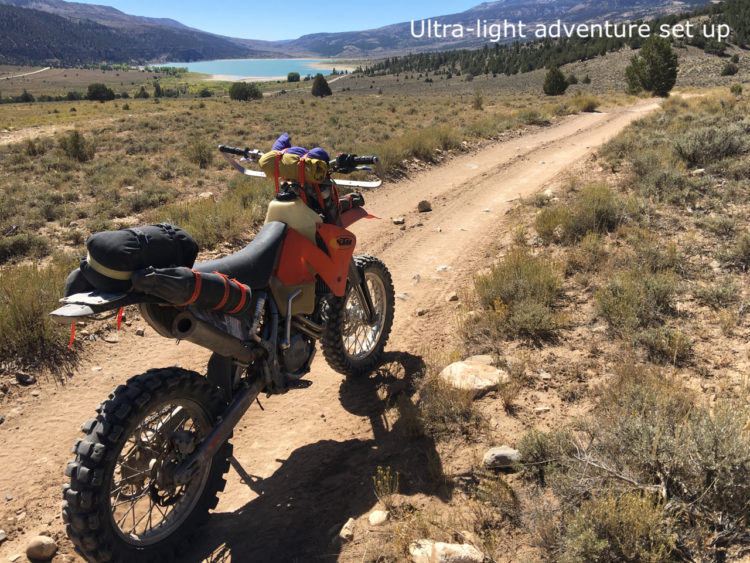 Cooking on the trail, good cooking not noodles or rice every day, secrets?

This is another HUGE piece.  If you don’t eat well, it’ll catch up with you quick.  Eat well and you’ll be more comfortable.

You won’t have a “meltdown” or a “come-a-part” when it’s 90 degrees and you’re trying to get up the rocky hill climb for the 3rd time.

The mess kit basically contains a metal cup and a tool that my buddies and I have developed affectionately known as the Adjustafork.

The Adjustafork is basically a long bbq fork that breaks down for easy stowing.  The name is basically a joke and came from poking fun at our buddy who builds the Adjusta-a-grill which is actually a legitimate adjustable camp grill but it’s way too big for motorcycle travel. 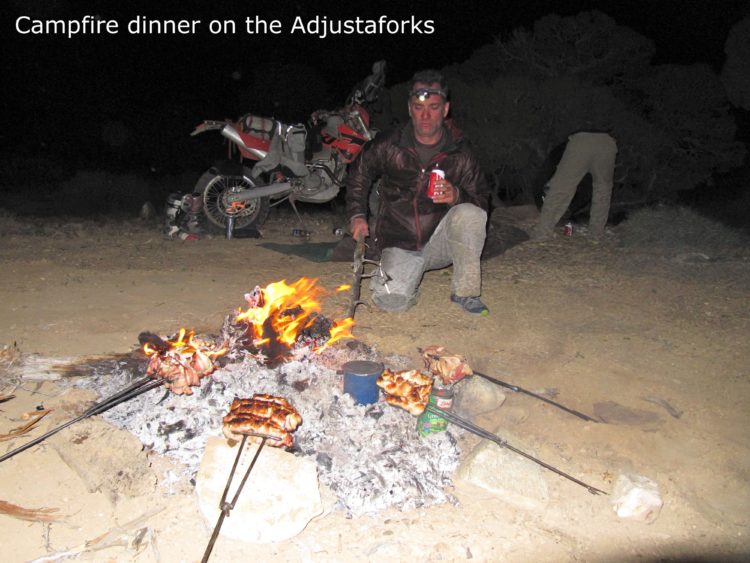 We generally cook up some sort of vegetable soup in the metal cup and cook meat on the Adjustafork over the fire.  We’ve developed quite a menu for the Adjustafork.

Bacon wrapped chicken is a favorite. Quesadillas are an easy appetizer.  It’s hard to beat a good ol’ ribeye slowly smoked over juniper. 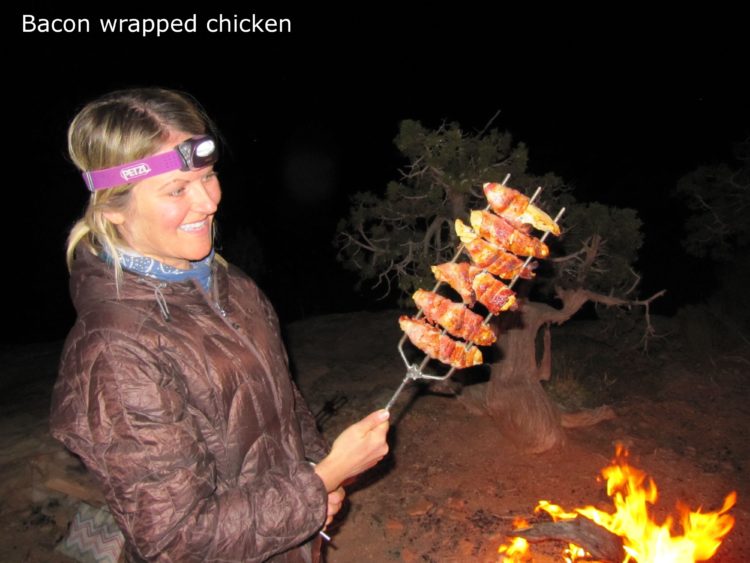 Lots of people have been asking about the Adjustafork so I started welding them up and selling them on eBay.

I also set up a little website:  http://www.adjustafork.com/  It’s pretty bare-bones right now but I’ll be adding all kinds of nonsense to it soon. 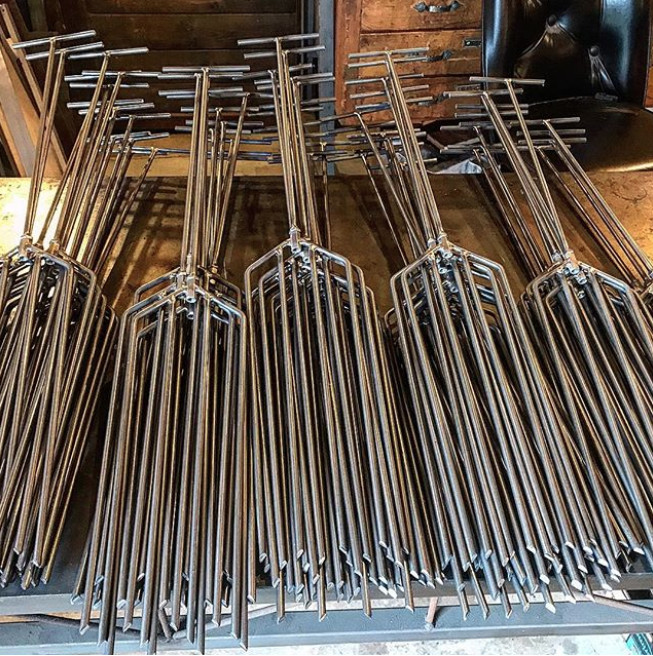 Tell us about your KTM and why it’s a little different than everyone else’s?

Well, my bikes are mostly stock with one significant change.  I run an 18” rim on the front.

I was looking for a little more float with my big bike in slow sandy washes and thought “why not try an 18” front rim?”  It worked so well that I decided to do the same thing on my smaller bike.

I’ve tried a few different knobbies but my current favorite is a Pirelli MT43 trials tire.  Not only does it float in the slow deep stuff, it adds a whole new level of “cush” to my suspension. 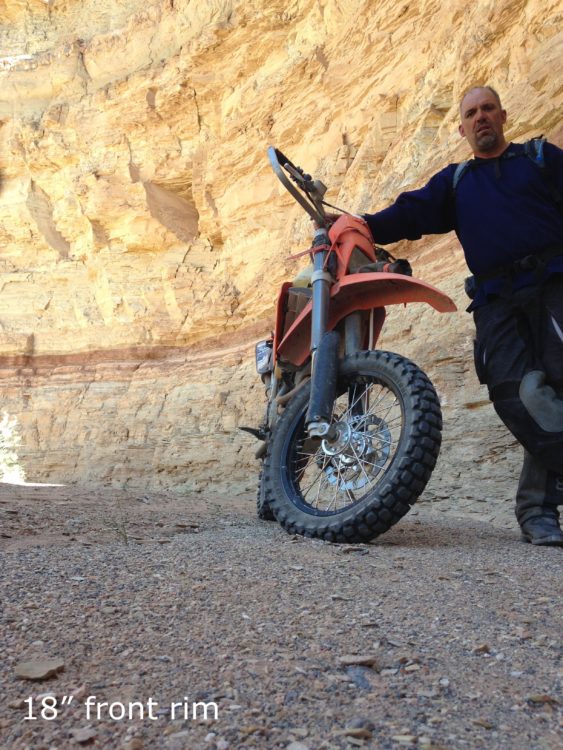 On your last trip Desert Minimalist Thumper Route when you got home in hindsight where there any things you’d change, is this a thought process you have after each trip to make the next one better?

The first thing that comes to mind was the one night on the last trip where we dealt with some rain.  In short, if it gets too wet you can’t ride your bike because it’s too greasy or there is too much mud stuck around the wheels and they won’t turn.  You end up staying put until it dries or you walk out.

This particular incident turned out to be minor but I still looked back at it. ALWAYS check the weather forecast when you get a chance.  In hindsight, I don’t know if it would’ve made any difference and we enjoyed our camp so much that night I don’t know if I would’ve wanted any other outcome anyway.

I generally analyze the routes we ride afterward and plan to go back and check out zones we only got a hint of.

On this last ride, we descended down this really rowdy old trail cut into the side of the hill. It was a bit much for my buddy Ricardo on his GS 800.  The more I look back, the more I want to go back and try climbing it on my 950 Superenduro.

After finishing a ride, I’m always analyzing ways of streamlining my gear even more. 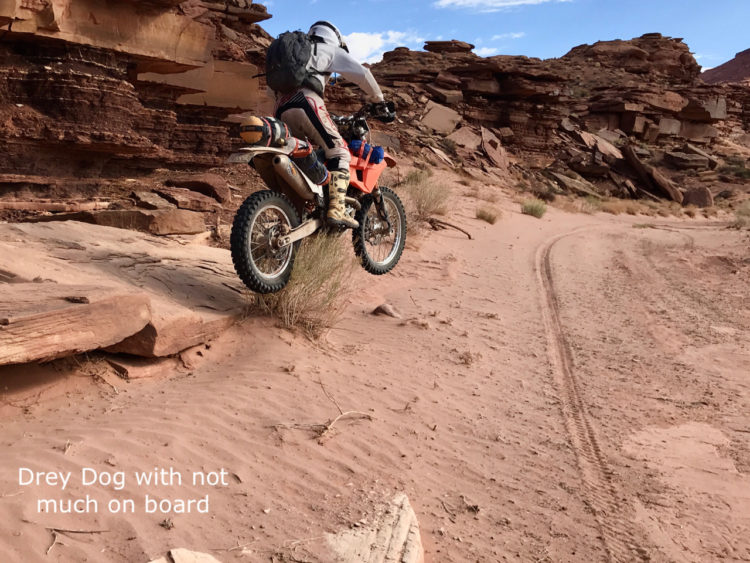 Well, in a sense, yes, I’m riding although not on a motorcycle with wheels.  I work as an avalanche forecaster and I cover the mountains of Central Utah.

I use a snowbike as my daily mode of travel.  These snowbikes are amazing machines. Very agile. I’ve been using them since 2012. I’ve resorted to fabricating my own machines. 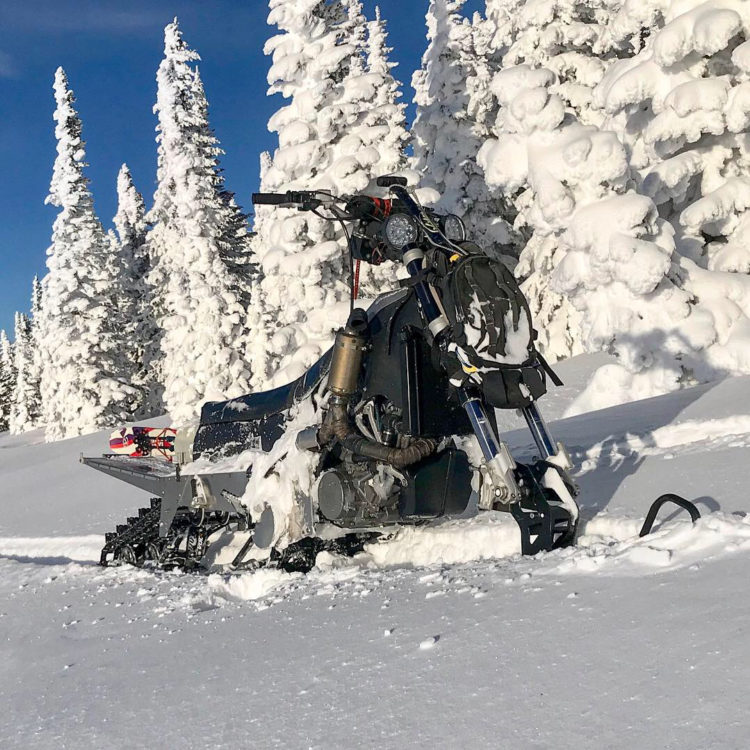 I love both these bikes. I often have a hard time figuring out which one I’d keep if I could only own one bike.  Tough choice. Sometimes I think I’d keep the 500, other times the 950. Both are incredible dirt bikes. The 950 is just stupid. It’s really in its own class. 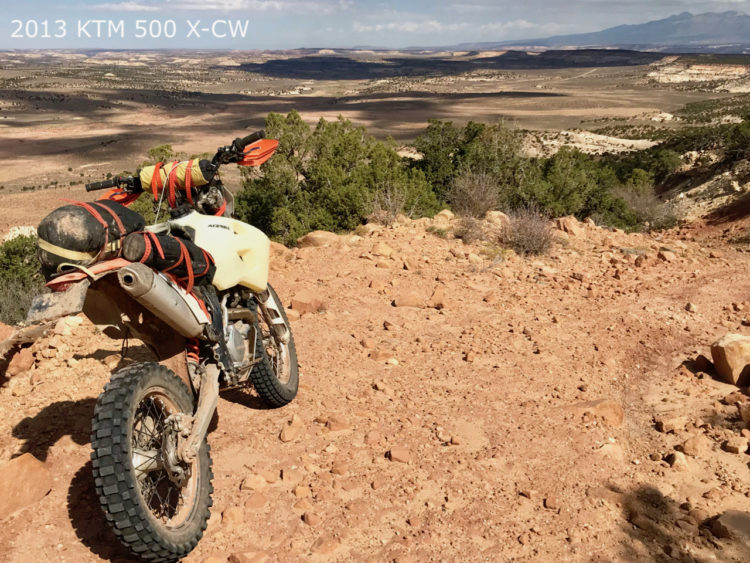 Yeah, it’s unrealistic but how about a bike with the mega power of the 950 that weighs what the 500 does?

A more realistic dream would be a 700cc twin cylinder dirt bike. Basically the 950 Superenduro in a 700cc size.  I don’t know. Sometimes I think the combo of owning a 500 and a 950 is the perfect setup.

If you had to pick one state to ride in for the rest of your life…which and why?

Right where I am.  The terrain is so varied and mind-blowing.  I’ve been exploring it for almost 30 years now and I still have tons of places to check out. 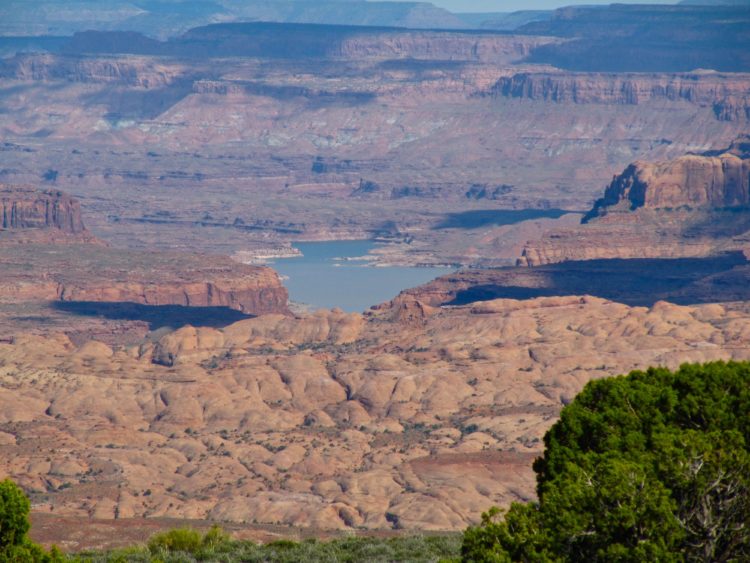 Yes but it’s illegal now so I probably shouldn’t talk about it.

I’ve been kind of looking at Peru for a number of years.  I might have to pick your brain on that at some point. (Bretts talking about from this page onward in my last ride report…)

Broke my femur out in the desert once.  The guys I was with found it was a compound fracture and was bleeding pretty bad.  Then it started raining pretty hard. That was kind of scary.

So many.  They all blend together.  It would be one of the days that we accomplished some crazy hill climb or descent at the last moment just as we were out of water, food, energy and it’s getting late but we roll up to the perfect campsite and relax and drink whiskey and use the Adjust-a-forks to cook dinner over the fire. 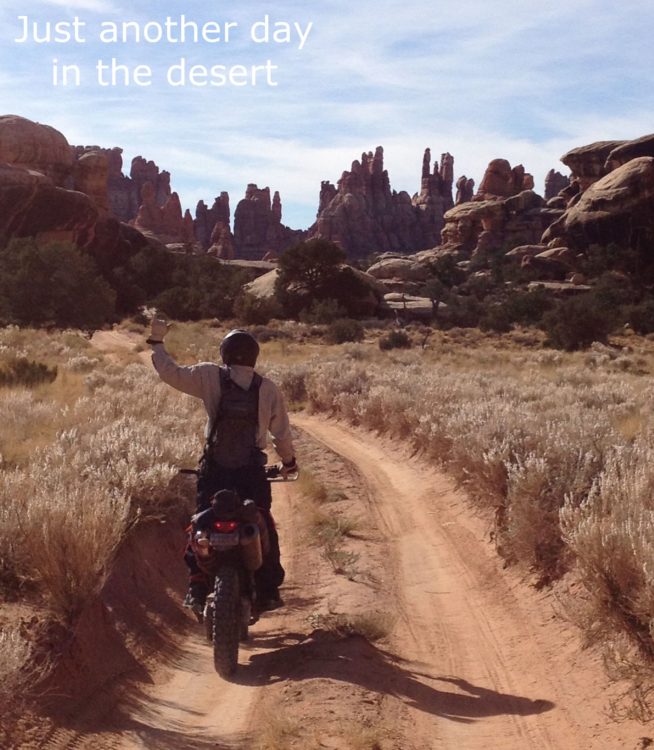 Well, not everyone is made for traveling.  But, if you have even the smallest interest in it, do it!!

I think it’s rare that anyone is disappointed that they traveled.  One of the obvious “big picture” benefits is that you learn how other people live which in turn should make you a better person. 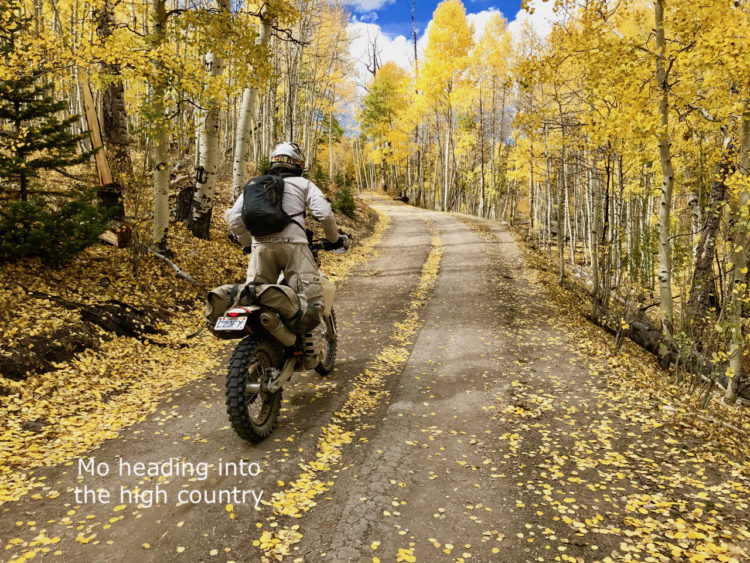 What does the word ‘adventure’ mean to you and do you think its overused?

This is an interesting question, Paul.  To me, it’s not total ‘adventure’ unless there are some unknowns.

I seek some sort of mystery. Like the chance that you might not make the intended route.  The river ends up being impassable. A route is washed out by a rockfall. You don’t have enough fuel.  Weather closes in. Etc. That’s what makes it exciting to me. 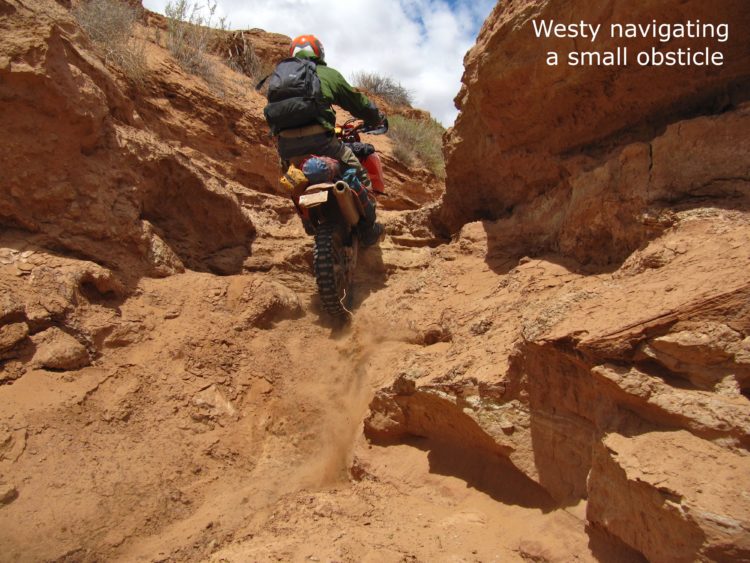 As far as the use of the word ‘adventure’, I’ve kind of changed my tune on that over the years.

I used to be in the mindset of thinking that what they call ‘adventure bikes’ like the BMW GS and KTM Adventure models weren’t actually suited for adventure at all.  I mean, how adventurous can you get on one of those overloaded pigs?

But, like I say, I’ve changed my tune. Every individual has a different opinion on what is ‘adventure’. Who’s to say that hopping on a 110cc Honda scooter and riding pavement isn’t adventure?

At this point, I can’t really be bothered to think about what is and isn’t ‘adventure’. Who cares? Hop on your chosen bike and go have fun. 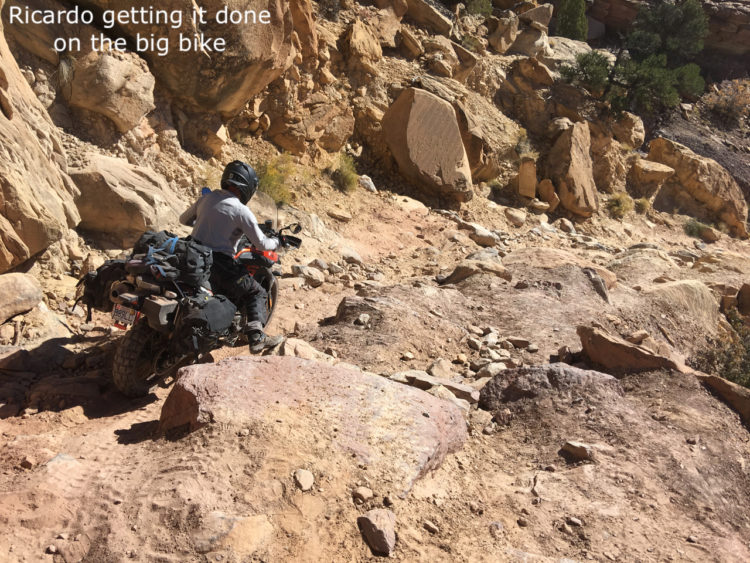 I don’t really have a single favorite.  I guess I like shots with the bikes loaded and in the air.  It makes me think of how light, nimble and free this method of motorcycle adventuring is.