It is not every motorcycle marque that can claim as its most famous customer a man who died while riding its product. On a rainy Sunday morning in May of 1935, Colonel Thomas Edward Lawrence swerved his Brough Superior SS100 motorcycle to miss two boys on bicycles and crashed, suffering severe head injuries to which he succumbed six days later.

His death served as a major impetus to the creation of effective crash helmets (which is another story), quite apart from cementing the hagiography of Lawrence of Arabia. But there is some confusion about the bike or bikes involved. He owned eight Brough Superiors, although supposedly the eighth was still being assembled at the factory in Nottingham when he crashed the seventh, George VI. Why was the seventh bike called the sixth? Simply because Lawrence had named his first Brough ‘Boanerges’, a name derived from the Amharic to mean ‘The Thunderer’. 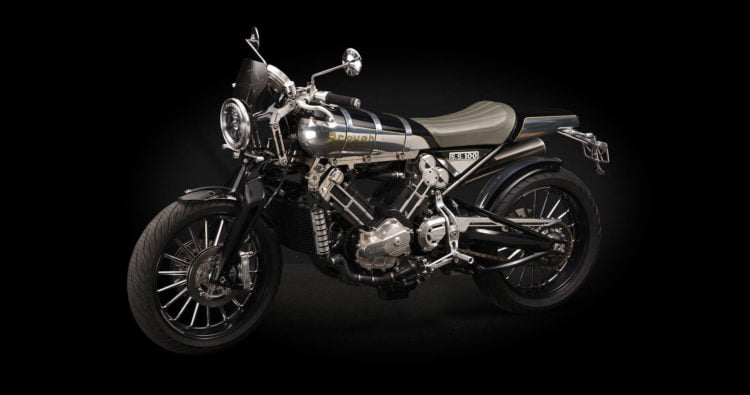 To cater to his modest height of 5’5”, he had the tank of George VI modified so it could accommodate a lowered seat and a bespoke lifting handle which the factory had fitted at his request.

A story in the British newspaper ‘The Telegraph’, which really should have known better, also noted that “With a nod to his duty as an enlisted aircraftman (read his story, it is fascinating), serving at RAF Mount Batten near Plymouth, he also requested that a small receptacle be clamped to the nearside lower section of the front forks, to secure the tip of his military swagger stick.” Enlisted aircraftman John Hume Ross with a swagger stick? I don’t think so. He would, however, have been entitled to a swagger stick in his other persona as Colonel Lawrence CB DSO.

The Telegraph also insists, with perhaps more credibility, that the motorcycle on which Lawrence suffered his fatal crash was not George VI. Was it George VII, supposedly still being assembled in Nottingham? I am sorry to say that I do not know.

The Pendine Sands is the Brough Superior I would choose.

“It’s noteworthy that this machine’s registration number of UL 656 was incorrectly displayed on the film prop that actor Peter O’Toole rode at the beginning of David Lean’s 1962 biopic ‘Lawrence of Arabia’,” the newspaper said. “That should have been GW 2275, corresponding to the updated SS 100 model for which George VI was part-exchanged in March 1932, and upon which Lawrence sustained fatal injuries three years later, aged 46.”

Colonel Lawrence died less than 90 years ago, and already we can’t agree on the facts. What we can agree on is that Brough Superior is back. 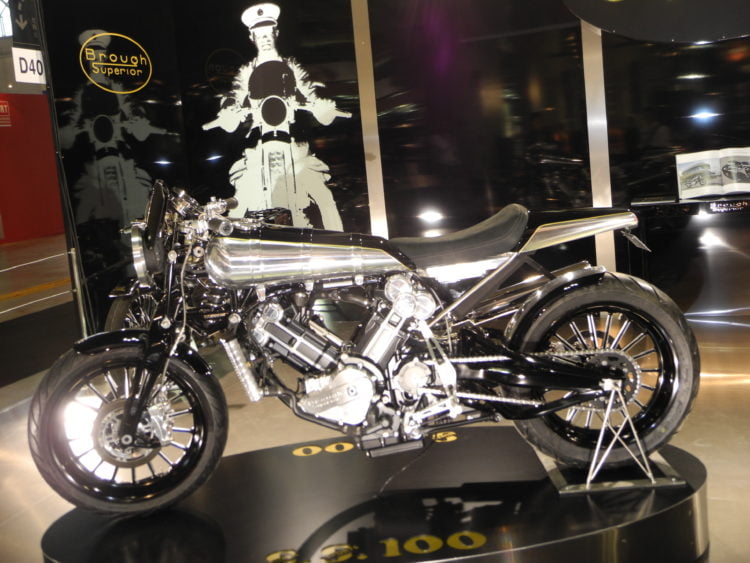 One of the new SS100s on an EICMA show stand, with the ghost of TE Lawrence in the background. (Photo The Bear)

Paul D’Orléans, one of my favourite commentators on matters of classic bikes, writing in the Motorcycle Arts Foundation production ‘The Vintagent’ about George Brough, notes that “the renown of the Brough Superior is a reflection of several qualities George possessed in abundance: he was a superb rider, one of the best motorcycle stylists in the history of the industry, and equally important, he was simply a genius at PR.”

Nowhere was the last of these qualities more obvious than in his adoption of the phrase “Rolls Royce of Motorcycles”, coined not by Brough but by journalist HD Teague of ‘The Motorcycle’ magazine. Brough was so taken by this that he started using it in his advertising, which did not please the ‘other’ Rolls-Royce. They intended to send a cease-and-desist to protect their brand image, but Brough invited a company representative to come and visit the factory.

He had his workers dress in all-white suits, complete with white gloves, and the look apparently so impressed the man from Rolls-Royce that the company allowed Brough Superior to continue using the phrase.

It would not have been especially difficult for the Brough ‘factory’ to be presented that way; it appears that it did not manufacture much of anything. Parts, including entire drivetrains, were specified by George Brough and then farmed out to be fine-tuned and finally assembled at the Hayden Road works in Nottingham. 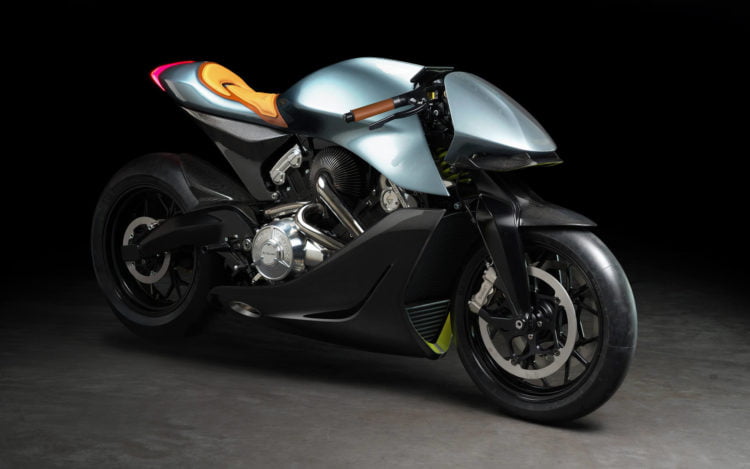 So much for the historic Brough Superior. The marque has resurfaced with three SS100 models, the plain ol’ Super Sport (SS100) with Euro 3 compliance and the Pendine Sand Racer; another SS100 (presumably with later compliance); and the Anniversary edition. And then there’s the AMB 001. This is not an upgraded version of the SS100s; it is a new design – by Thierry Henriette, who also designed the other bikes – linked to Aston Martin cars.  It is turbo charged with a unique chassis and you can’t ride it on the road.

I have been offered a ride on one of the SS100s, and while I hope history does not repeat itself and puts boys on bicycles in my path, I cannot wait to sample the modern manifestation of the Brough Superior myself. I’ll keep you informed.