This thing could be right out of Star Wars, Blade Runner, and Mad Max.  The big difference, the HyperTEK is a production motorcycle available to the public.  And it’s electric and beautiful.

The craftsmanship lavished on this machine is nothing short of impressive.  Each piece of the machine looks to be a work of art.  There aren’t many parts that you would think were designed solely for production efficiency.

The HyperTEK’s battery pack and motor are prominently displayed.

The bike is the result of a partnership between BST, a UK maker of carbon fiber components (notably carbon fiber wheels), and Pierre Terblanche (of Ducati fame/infamy).  Ultimately, what the two have come up with is an electric motorcycle that looks like no other.

By now, you may be saying to yourself, “yeah, it looks nice, but how does it perform?”  Based on its claimed stats, the bike performs; -very well.    BST says the Hypertek has a “high power density radial flux motor with 80kW (107 HP) and 120 Nm (89 lb-ft) of torque”.  In actuality, the motor is a DHX Hawk water-cooled PMS unit. 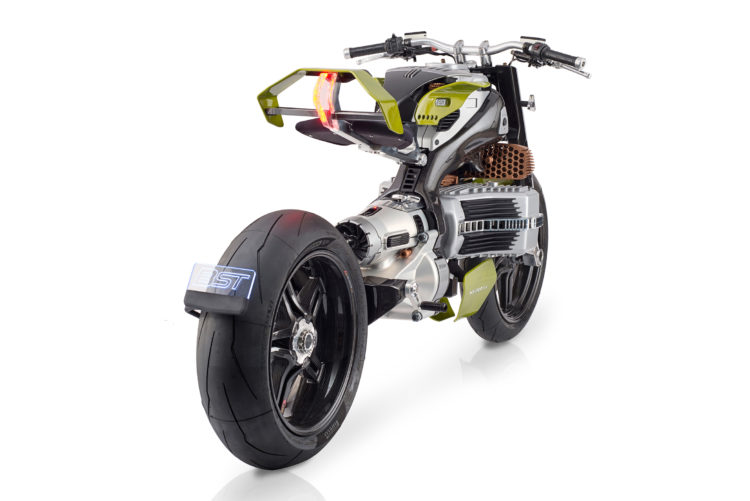 The HyperTEK presents its minimalist back end.

The bike’s claimed range is quite substantial at 300 km (186 miles).  BST also says that the motorcycle will DC quick charge in only 30 minutes.  Unfortunately, they don’t provide the state of charge (80%, 100%, or something else?) at the end of those 30 minutes.

The machine’s frame is a carbon fiber monocoque, while the front forks are a carbon fiber integrated one-piece structure, including the triple clamp.  Stopping power at the front is provided by a single 330 mm aluminum ceramic infused ventilated disc.  At the rear, a combination aluminum sprocket/disc handles the duties.  BST’s carbon fiber wheels grace the front and back of the machine as well. 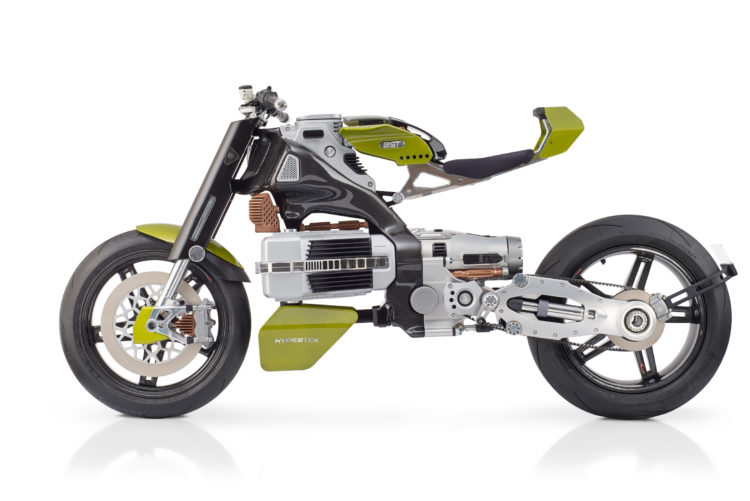 The HyperTEK is not one of those slab-sided blocky electric machines.

Did you notice anything missing in the cockpit of the bike?  If you look closely, there’s no display, so how do you know how you and the HyperTEK are doing?  Well, all those displays are inside a purpose-built Cross of Japan (perhaps a Cross X1) helmet, and its Heads Up Display.

With all that carbon fiber, you might think that the HyperTEK is a feather-light machine.  But it weighs in at a hefty 205 kg (~450 pounds).  Perhaps that’s the price you have to pay for that kind of battery, billet, and range. 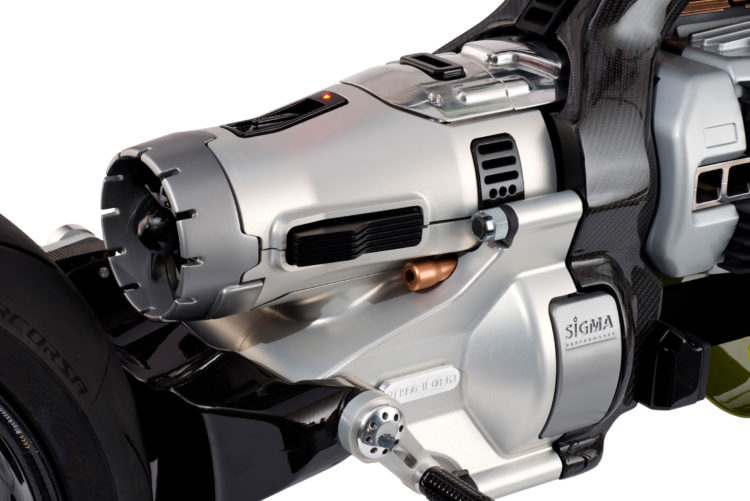 This is a close-up view of the HyperTEK’s electric motor.

Speaking of price to pay, BST has not yet released pricing.  You can anticipate that it will not be insubstantial.  But if you want to ride electric and be the only kid on your block with that kind of look, expect to free a significant number of paper notes from your bank account.