I rode round-the-world (rtw) back in 1978/79 with my friend Charlie on Honda XL250s. Recently, during a pub conversation and under the affluence of incohol, I said I’d build the bike I would want for an rtw bike if I was to do it now. And why not? It’s an interesting project.

The choice of bike was not difficult; a ride through our bushfire-affected forests on a BMW F 750 GS had confirmed what I thought anyway, namely that this is the best all-round motorcycle on the road (and off it, a bit) today for people like me. Who are people like me? We’re at the upper end of the range of motorcyclist’s ages; we’ve been there and done a bit and don’t need to prove anything; and we know quality when we see it.

We’re also “not now that strength which in old days / Moved earth and heaven” as Tennyson has it. We prefer lIght bikes, and although the F 750 GS is hardly light light at 224 kilos wet, it’s certainly lighter than some. 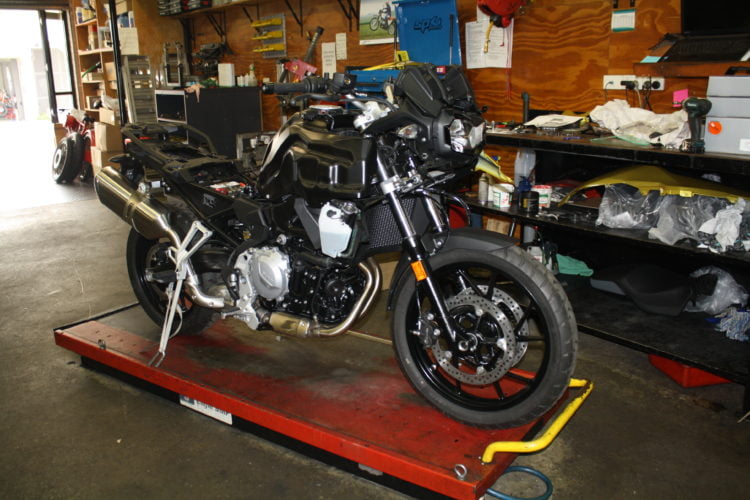 My brand-new F 750 GS at the shop, being prepared for ‘adjustment’.

Quite early on, I decided to take the easy way out and build the bike up from commercially available parts rather than making them myself or having friends make them. I’ve been a great admirer of Wunderlich in Germany: you may have seen my post about their high quality, small volume manufacturing. So they were the obvious choice – take a look at their catalogue.

I arranged with BMW Motorrad to buy one of the cooking version bikes – they are more affordable at AU$15,385 than the up-specced F 750 GS Tour, the F 850 GS or GS Adventure. Saving a few bucks early on would come in handy when I fitted the things to the bike that I really wanted. Some were already there: heated grips, Cruise Control, tubeless tyres (yes, I know there’s argument about those but I like them, too) and ABS. I am not entirely sure about the lack of a centre stand. I could have fitted one, but it was a fair bit of extra weight. So what else did I want and why? Read on. 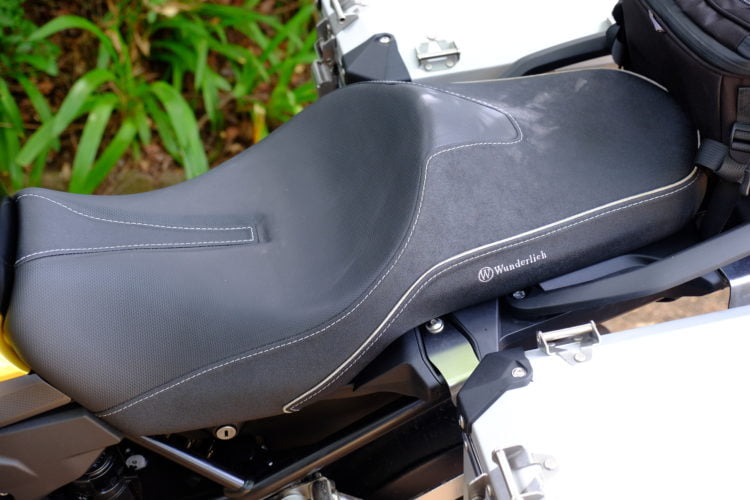 If you do one thing to your bike to get it ready for long-distance riding, fit a comfortable seat.

If there was a competition for riding around the world on an uncomfortable seat, I reckon Charlie and I would take it out for putting up with the seats on our XL250s. I settled on an Aktivkomfort seat from Wunderlich. The original seat is not bad, but we’re talking days of riding here, and then some more days. This is more important than you might think. A sore backside can spoil the best ride, and definitely make it less safe. 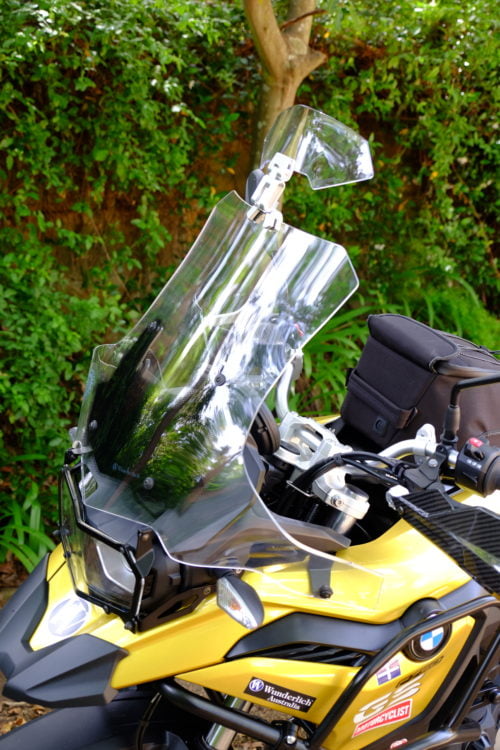 A good windscreen makes life a lot easier on the road, too.

Your chest and neck can also do with a bit of care. The way I decided to look after them was with a high EXTREME windscreen and a Vario wind deflector on top of that. Reduced wind pressure, elimination of buffeting and a calmer ride are worth heaps. The windscreen actually wraps around the bodywork of the bike and that adds up to a more relaxing ride and a less stressed body at the end of the day.

I realise that I’m out of step with just about every other rtw or long distance rider out there, but I don’t like random bags strapped all over the bike. It doesn’t look terrific, it makes it all too likely that you will find the contents of one or more bags soaked or perhaps even missing, and it leaves the contents of the bags far too accessible to thieves. I can do without worrying about my luggage while the bike is down in the hold of a ferry while I’m sitting upstairs with no way of keeping an eye on it, for instance.

If you carry mostly security gear in the seatbag, you can leave it on the bike.

A seat bag is useful for the things that you’ll use when you leave the bike anyway: a good strong lock with a difficult-to-cut cable, and a bike cover. I also add things that I want in easy reach on the road, like a Rocky Creek Helmet Lok, a water bottle and some snacks along with my dillybag. That name comes from an Australian Aboriginal bag used to carry all sorts of stuff, and that’s exactly what mine contains. Spare ear plugs, lip balm, eye drops, tooth cleaning kit, sunscreen, a spare neck cloth, visor cleaner, some soap so on. It’s not the end of the world if the entire contents of the bag are stolen.

I lock the bag itself onto the frame of the bike with a light steel cable and the Helmet Lok because I definitely would mind if I lost the bag – it’s an Elephant Tail Bag. I usually take the dillybag with me when I leave the bike.

A tankbag is a great place for camera gear. Just don’t endo your bike like I did mine once.

The other item of soft luggage I like is a tank bag. The Wunderlich Sportbag is the ideal size to carry a camera body with a spare lens, and another camera body with a lens can be carried on top of the bag held by the included bungee straps. This goes inside the tank bag when I leave the bike, or around my neck, and the tank bag goes with me. It is extensible so it can hold both the dillybag and the second camera, but not so large that it tempts me to carry all sorts of crap in it.

I keep a basic toolkit, including the screwdrivers or spanners that tighten anything that has a habit of coming loose, under the seat. You learn what you need pretty quickly. There is plenty of room there on the F 750 GS, although it’s not enough for wet weather gear. I don’t usually carry that anyway because I have a long distance Klim suit that’s rainproof. 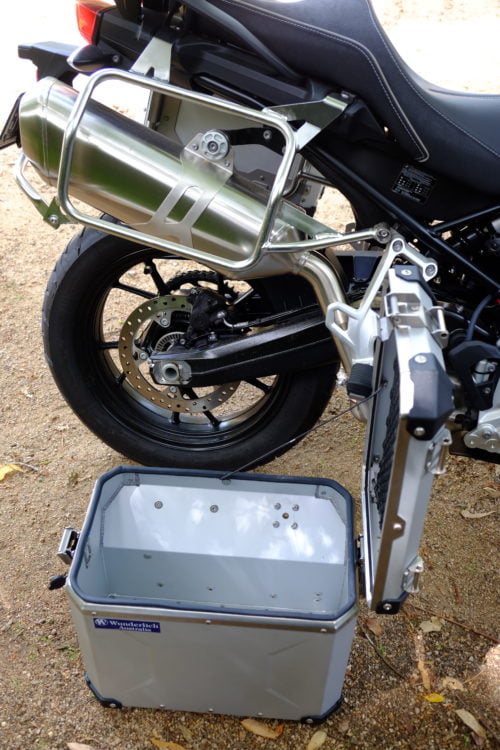 Because I don’t like loose kit on the bike, I need to pack everything in the panniers and therefore they need to be big. Fortunately, Wunderlich’s 1.5mm aluminium EXTREME pannier boxes hold 45 litres and 40 litres, left and right respectively. In my opinion that’s quite enough for one person, even if you’re camping.

The waterproof panniers are solid and well designed and come with a five year guarantee. The locks double as hinges so you can take the lids off completely or just unlock one end and use the other as a hinge. Elastic nets are fitted to the insides of the lids. Fittings are stainless steel or, in the case of the replaceable corner reinforcements, tough plastic. There is a bar across the back of the bike to stabilize the panniers. If you already have BMW pannier frames, the Wunderlich panniers will fit them.

Read the rest of the story in Part 2.

[All photos by The Bear. Parts were supplied for for testing.]