Is it possible to outgrow your bike, or is it all about skills?

Lucy, my Suzuki DR650, has been the perfect bike for me for three years now. It got me from Arizona to Chile, across some of the Trans America Trail and on the tail of Rally Dakar in Peru, and it even survived the Hellas Rally race in Greece and the Bosnia Rally training event last year. 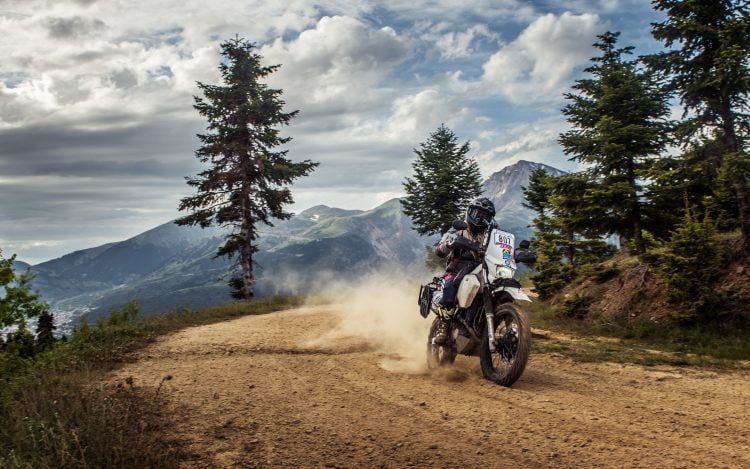 It’s been patiently waiting for me parked in a friend’s garage in Warsaw over the winter, while I lead motorcycle tours and traveled in South America; next week, I’ll be reunited with Lucy, getting new tires, servicing the shock, changing the oil, and hopefully, hitting the road again. I’m excited; I miss Lucy so much, and I know it still has several good seasons in it.

The question is, seasons of what exactly, and is it possible I’ve finally outgrown this bike?

When the Road Ends

As someone who learned to ride on a small Chinese motorcycle in a Peruvian desert late in my twenties, I’m well aware of my limitations. I’ll never be like Laia Sanz, nor will I ever win Romaniacs and, since I’m not aiming to, that’s cool by me. For the last three years, the Suzuki DR650 has been perfect for what I wanted to do: potter around the world slowly, off-road as much as possible, but nothing crazy – no single track or gnarly rock gardens – just gravel roads and forest trails, all the way from North to South America and europe. And the DR650 performed brilliantly. 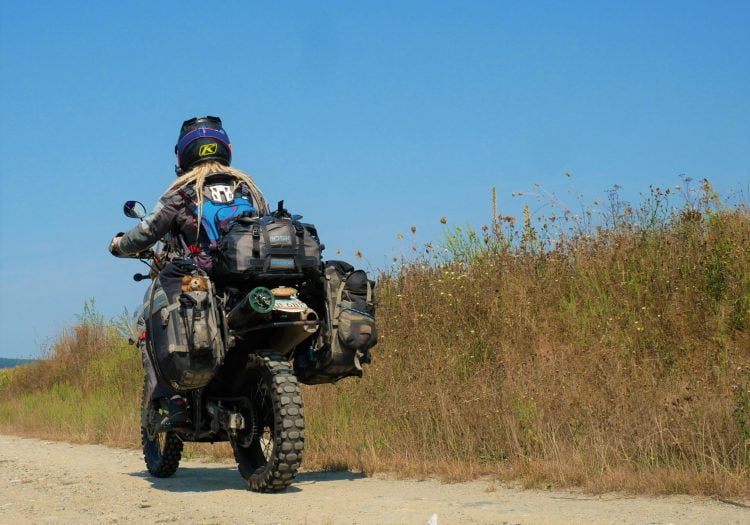 The perfect beast of burden

If I was to keep doing that, simply traveling around, stop burning clutches, and adjusting the valves more often, Lucy and I could easily do a couple more years and some thirty or forty thousand miles more.

Except last year, because of the Dakar, something changed, and merely traveling isn’t enough for me anymore.

Entering Hellas Rally Raid with zero experience and on the DR650 wasn’t the smartest idea. I survived the whole seven days of racing, and I treasure my Hellas finisher’s medal more than anything else I own, but whether it was well deserved is up for debate. Lucy and I did a little better in Bosnia Rally, however, but the fact remains that the DR650 isn’t exactly a rally bike (unless you do a crazy Stefan Hessler DR rally build). 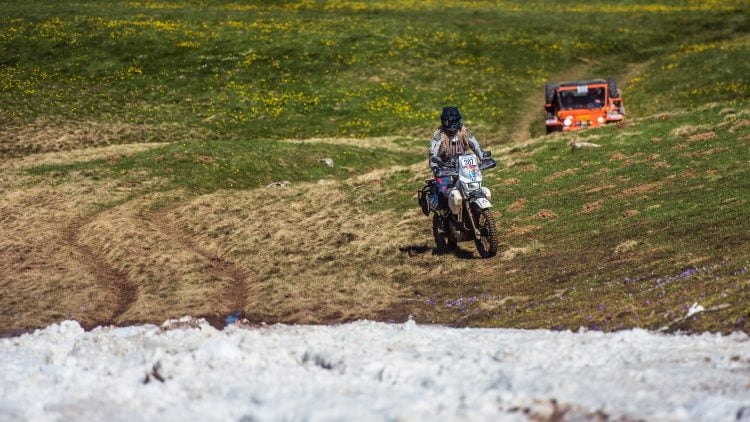 I keep telling people they don’t need a rally bike if they’re doing their very first roadbook navigation rally, and I still strongly believe that. But what if you’re doing your second or third?

Skill vs the Machine

Chances are, my DR650 may be just fine for another Hellas Rally, or even Serres or Panafrica; it may simply require a better rider. But is it possible to outgrow your bike, too? And is it possible that a better bike can help improve your skills? 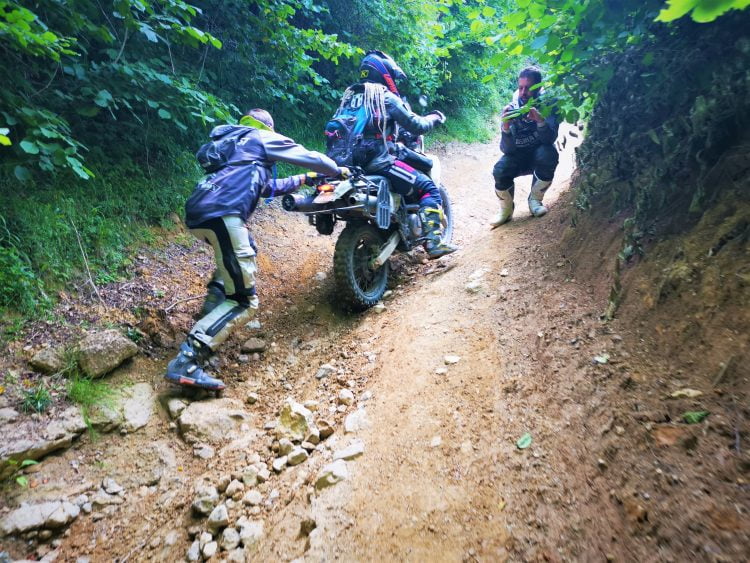 The rider or the machine – which one’s lacking the oomph to get up the gnarly hill?

When I was younger, I used to ride horses and later, train people to ride. I’d always put new riders on schoolmaster horses – that is, horses that have been extremely well trained and that can forgive or even compensate for the rider’s mistakes because if you put a green rider on a green horse, the result is often either highly entertaining or very disastrous but never good.

For the longest time, it felt like Lucy was the perfect schoolmaster motorcycle. It’s light and nimble so it’s easy to handle, but it’s also sturdy and sure-footed so it’s forgiving and can take a bashing. It can plod along forever, it’s practically indestructible, and it doesn’t take much to maintain or fix simple issues that arise. 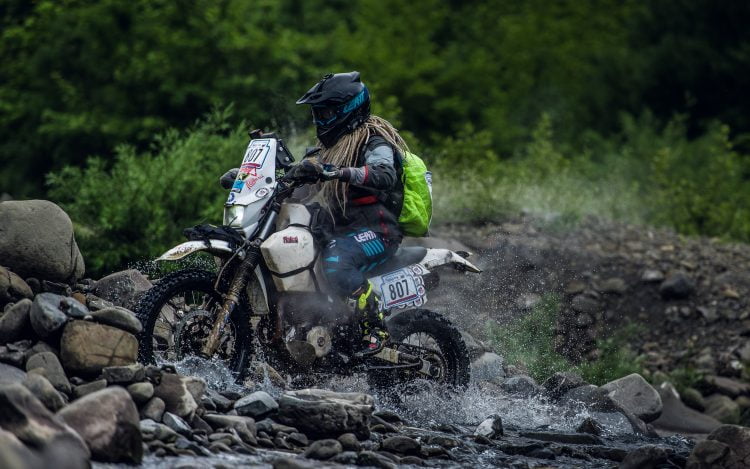 But now, with the added task of rally races, it’s not just traveling and easy off-road trails anymore. It’s racing, single track, gnarly hill climbs, and survival in rally conditions, then back to traveling; the plot thickens, the engine protests.

It seems that the easy solution would be to follow in Lyndon Poskitt’s footsteps and get a KTM 690. The trouble is, I’m nowhere near Lyndon’s talent or ability to ride fast, rebuild engines, and compete in the big desert rallies like the Africa Eco Race. I’m more of a beginner wannabe that’s trying to improve, however slowly, and get a bit better each year, with questionable success. I’ve no idea if a more thoroughbred beast like the KTM690 isn’t too much for me; I’ve no idea how to rebuild engines or modify stuff on bikes, so if things go wrong during a rally or while on the road, I’d need help of a mechanic and I can’t imagine KTM service being cheap.

Another option is to save up and go for that nutty Hessler rally build, kitting out Lucy to be lighter, nimbler, and faster. Rally builds are expensive projects, but I would keep the simplicity of the DR650 and could keep on traveling just as easily and cheaply as before once the second rally season is over.

So, is it possible to outgrow a bike, or do you just need better skills? Would you get a shiny KTM, do a rally build on the DR650, or try facing another season of traveling and rally races on the same bike?