And now, for something completely different: Given the common crossover interest between camping, overlanding and adventure riding, here’s a new four-wheeler our readers might find interesting.

Mercedes-Benz appears to be picking up where Volkswagen left off, with a new compact van that doubles as a camper. It’s called the Weekender, and it’s the first Mercedes camper van for the US market.

At first, you might think the five-seater Weekender is a grocery-getter and kid-hauler, because it’s based on the Metris minivan. It lacks the aggressive styling and hyper-accessorization that typifies the travel market (although that’s sure to come!). But with the help of Driverge Vehicle Innovations, (based next-door to the Mercedes plant in South Carolina), these have been converted into campers, that, as the name suggests, appear to be optimized for weekend travel.

The press release says “Harkening back to the glory days of camper vans, Mercedes-Benz drew inspiration from illustrious models of the past while integrating the latest sophisticated safety, reliability and convenience features to create a new modern pop top van.” Translation: This machine is styled after the European campers, particularly the VW Westfalia, that dominated the factory camper van scene from the 1950s on, but this rig is much more up-to-date, designed with 21st century electronics in mind. 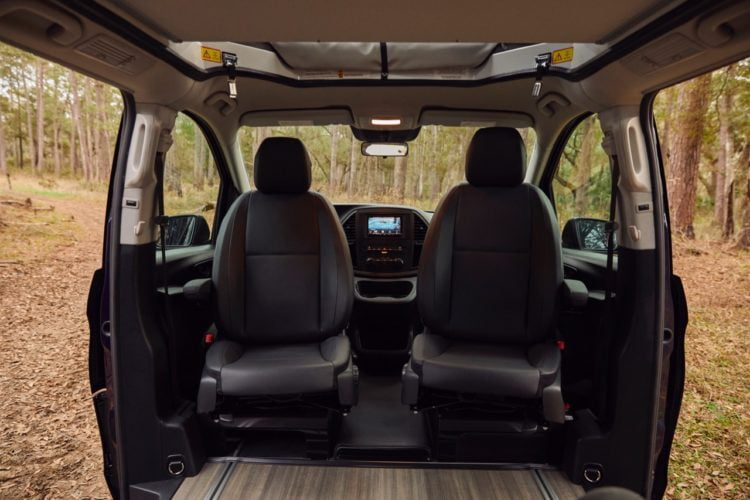 A more refined experience than the grungy conversion van that you and your friends used to smoke weed and escape on the weekends during your late teens. Photo: Mercedes

For instance, the van comes with USB charging ports in standard trim, with options for solar charging panels and batteries that make it easier to stay powered on off-grid excursions. You can also add upgraded factory navigation and audio systems.

As far as up-to-date safety features, the Weekender has a rearview camera system as standard, as well as a Crosswind Assist feature, which “helps stabilize the van and boosts safety in strong, gusting crosswinds.” It must be somehow tied into a stability control system, because Mercedes also included some sort of traction control that “actively intervenes to help keep the van firmly under control and safe by automatically braking individual wheels and reducing engine power to help stabilize the vehicle if wheel spin, understeer or oversteer is detected.” This computer-controlled system can also detect if the van is carrying a load, and change its inflight adjustments accordingly.

We’ve come a long way since the days of throwing a mattress in the back of a van and calling it a day, it seems. Speaking of actual camping arrangements, the Weekender has a pop-top with a two-person sleeping area (there’s a two-inch memory foam mattress there, and USB ports for charging and lights). The rear bench also turns into a bed for two, or can be converted into a cargo area. The front seats will swivel around 180 degrees, turning them into comfortable chairs and converting the van’s interior into a dining room or lounge. 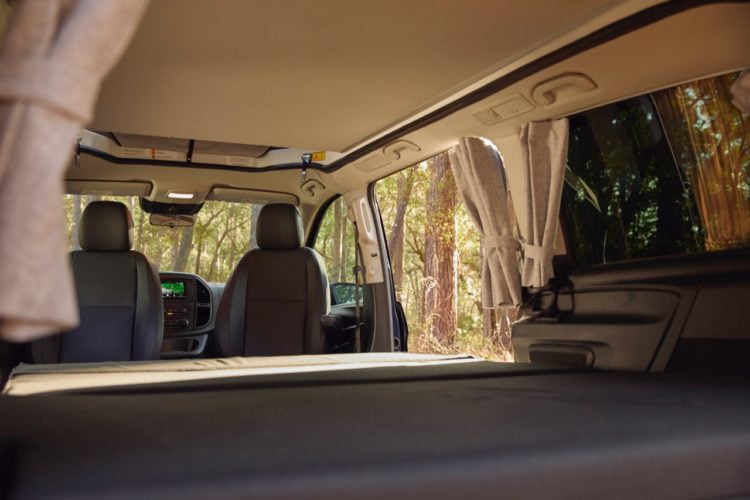 The rear of the van can work as a cargo space, or a bed. Photo: Mercedes

All fairly standard stuff to longtime vanners, as are many of the optional add-ons: an eight-foot canopy, a cargo rack (“for hauling surfboards, extra storage or skis“), pullout rear kitchen, mosquito nets for doors, and so on. Towing capacity is 5,000 lb, so if you want to use this to haul a race bike, you can.