Charley Boorman, Ewan McGregor, and the Harley-Davidson LiveWire electric motorcycles have completed the “Long Way Up” according to ADVPulse.  Starting in Ushuaia, Argentina, the team trekked its way northward.  The journey took them through South, Central and, North America to reach their final destination in Los Angeles California.

Two Rivian R1T electric chase pickup trucks and at least four camera-equipped bikes were seen traveling with the pair.  Also in attendance at the finish were a group of about 40 invite-only local riders.

Rob Day, an invited rider and riding coach at Rawhyde Adventures, said bikes from many different brands accompanied Ewan and Charley to the wrap party.

“We basically took over Interstate 5,” he says, “moving at 40 mph 3 lanes wide with everyone jockeying around to get into camera shots and ham it up. It was beautiful chaos.”

At the wrap party, Rob chatted with Charley about the trip.  When asked about how it was keeping the electric motorcycles charged, Charley reportedly said that “charging wasn’t too bad and they often charged from locals, even off the grid locals who only had generators.” 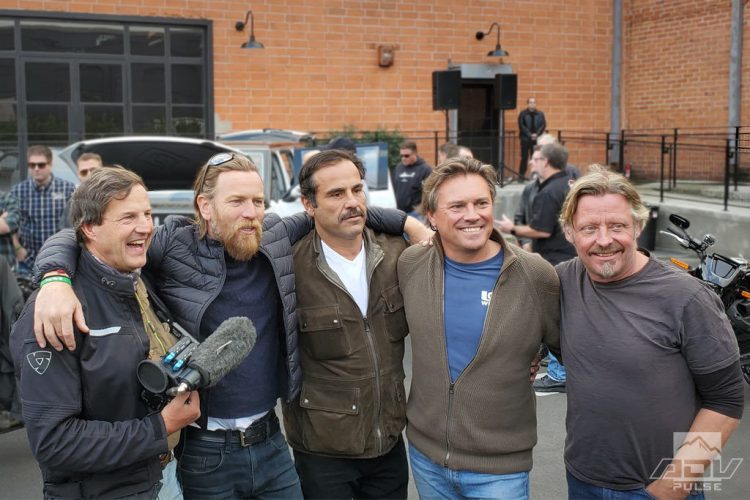 Charley also said that charging stations were far more plentiful and faster once they crossed into the US.  This enabled them to pick up their pace.  With better-charging capability, the pair were able to up their pace to about 300 miles per day.  This against an average of 120 – 180 miles per day while south of the US border.

During the trip, the pair also had assistance from other gas-powered crew support vehicles.   A Mercedes Sprinter van, as well as a Ford F350, transported additional battery banks to allow electric top-offs of the LiveWires.

The route and type of terrain the duo and their LiveWires covered are not yet clear.  But Rob Day said that the bikes looked like the had been ridden hard and that the machine wore scuffs etc.

Now that the journey is complete, it is not clear when the travelog recording will be ready for screening.  But the previous films did not take long.  The original Long Way Round made it to the screen about 3 months after the ride was completed.  We’ll have to wait and see how long it takes for this journey to air.