BMW appears to be working on an electric supercharger system, intended to be fitted to the S1000 RR.

BikeSocial has uncovered technical drawings (filed with a German patent office, allegedly) that show what appears to be an electronically-activated supercharger system that’s designed to mount on BMW’s litrebike engine.

Most supercharger systems are run mechanically, by some connection to the engine. Electronic superchargers have been available for years, but haven’t gained the popularity of their mechanically-activated counterparts.

While properly set-up electronic superchargers do have some advantages (ease of installation, lower cost, adaptability), they tend to be less efficient than a mechanical supercharger, unless their electronic power is drawn from a source other than the engine, something like a regenerative braking system. Electronic superchargers do have the advantage of providing instantaneous boost, instead of waiting for the engine to spin up. The result is more immediate power gains.

Of course, BMW’s patent application is no guarantee of commercial availability. Suzuki has been teasing the Recursion turbocharged concept bike for years, but still hasn’t brought it to market; there have also been strong rumors of an upcoming turbocharged Hayabusa, but nothing’s appeared in concept form yet. 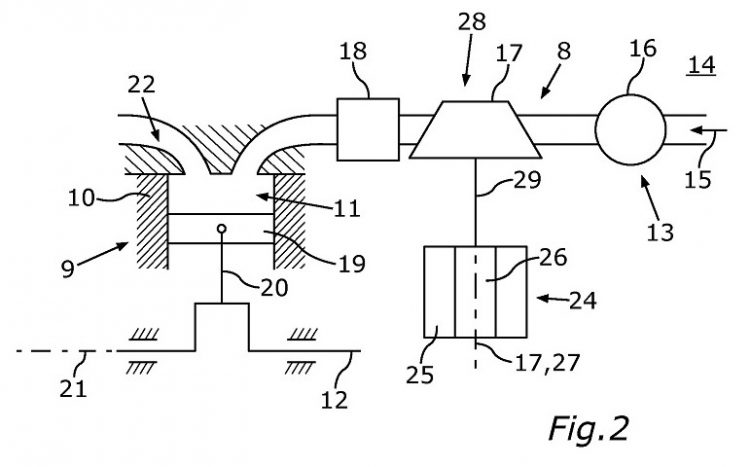 If you’re tech-savvy, you may be able to decipher this drawing that shows the supercharger system, supposedly. Photo: BikeSocial

However, there’s definitely interest in forced induction technology across the motorcycle industry at the moment, as manufacturers puzzle out how to make power from an engine while dealing with tightening emissions standards. Kawasaki’s currently the only manufacturer making a supercharged motorcycle, with its H2 series. But it’s likely we will see more of these designs in the next few years, as the OEMs adapt existing internal combustion engines to meet anti-pollution measures.