For some of us, the thought of a Chinese motorcycle sends shivers down the spine. But with rising costs on the showroom floors, and many of us looking to get more bang for our buck, we are drawn to the new array of  low-cost motorcycles from China. Whether they’re seen as the new kids on the block, or as mouth-watering brand revivals from our manufacturing ‘Christmas past’, they tempt us with retro hipster appeal. But is it all too good to be true? Or is the Chinese undercurrent swirling beneath those swag badges not quite as bad as we think?

The Chinese joined the motorcycle manufacturing scene in the early 1950s, borrowing German BMW engineering from Russia to meet their growing military requirements during the Korean War. Later they moved on to production for the masses, providing much-needed transport in China. They have gone from strength to strength ever since and, in 2000, took center stage as the biggest motorcycle producing country in the world, a position that they still hold. 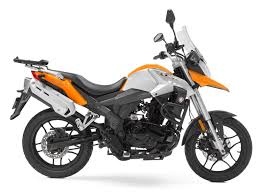 China today has more than 200 companies producing motorcycles nationally, companies like Loncin, Zongshen, Grand River (Haojue Lifan), Jinan Qingqi, Jialing, Jianshe, Haojin, Shineray, Bashan, and Jonway. Two big names in Chinese motorcycle export are the Jinan Qingqi Motorcycle Co and Zongshen; two makes that I had the opportunity to use over the summer. The Zongshen RX1 was the bike I recently rode around the coast of Britain with its little copy of  an engine from Honda’s 125cc range like the CG125.

Both Jinan Qingqi and Zongshen manufacture motorcycles for export in competition with each other,  both offering a menu-style ordering system. They have tenacious appetites for growth and recognition,  an appetite that sees Zongshen investing heavily in new technology as a part of  its ‘Cyclone’ project. They have their own race teams, finishing  2nd overall in the World Endurance Championship, winning several FIM E-motorcycle championships and entering the Dakar Rally 2017 with the NC 450. Zongshen is also presently in partnerships with Harley-Davidson and Piaggio. 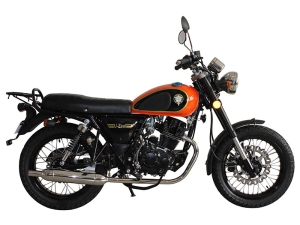 The Jinan Qingqi Motorcycle Company’s historic roots are intertwined with that of Suzuki, manufacturing the 4 stroke, bullet-proof, air-cooled engine found in many of Suzuki’s 125s; the same engine they use in their bikes, under license from Suzuki.  Jinan Qingqi also supplies some of the most common mopeds found in China. Both Jinan Qingq and Zongshen’s feet are firmly planted, and they keep vice-like grips on the lucrative bread and butter sales of their small-bore motorcycles, and exports, driven in the west with the help of those lusty sale tactics!  But lurking below the facades lay the bones of the same motorcycles they have been manufacturing for years, bikes that have provided economical, low cost travel for the masses, producing enough power to propel three people, in flip-flops with a live chicken, along at 45 mph. *Other eye-watering acrobatics and cringe-worthy variations are available!

So, with all that pedigree blood running through their veins, why are some of us so reluctant to buy them? What’s the problem? Well for me, from a technical point of view,  it’s all about the specification. When the likes of Suzuki approach these companies with manufacturing requests, it’s done with a full specification, to Suzuki’s standards. Generally, if you purchase one of the bikes they export, it will be built to their own specification, a specification that’s set to make money while delivering low-cost machines. So you may get a solid engine by default, but the chrome and paint may be thinner, and this was certainly true of the models that I used.

So what’s the bottom line? Well in my humble opinion, if it’s built-in their factory for one of the big names and to their specification, no problem. I love the little bullet-proof engines, but living in a wetter climate, I did not appreciate the early onset of rust or the electrical faults which I experienced. With the newer tech bikes aimed at higher markets, I personally wouldn’t want to use my cash to be a guinea pig. So, would I recommend you buy one new? Probably not; instead I would recommend buying a nearly new motorcycle from an established manufacturer at the same price. Will I own another? – We will see!

The video below features the founder of Zongshen, Zuo Zongshen.

Travel
Meeting Overlanders on the Road

Would I REALLY buy the Harley-Davidson Pan America?