Chinese police now have a new moto weapon in their arsenal.  The new machine is the result of the collaboration between Chinese moto manufacturer CFMoto and KTM.

The business relationship is not a new arrangement.  CFMoto already produces KTM bikes in China.  They currently manufacture the 200 and 390 Dukes.

And later this year, CFM will open a new factory that will have a capacity of 50,000 bikes per year.   This factory will be responsible for the production of KTM’s 790 Adventure and Duke models for worldwide distribution.

A screengrab of the front of CFMoto’s new CF1250J police motorcycle.

The new facility will also produce a CFMoto branded engine designed from KTM’s LC8 V-twin engine as a baseline. Although the new engine has LC8 DNA, its been heavily re-designed by CFMoto with new castings and different internal specifications.

The CFMoto engine displaces 1279cc, which is a bit smaller than the current 1301cc engine found in the KTM Super Duke and Super Adventure machines.  Still, it’s bigger than any other Chinese manufactured motorcycle engine.

This new engine powers CFMoto’s latest bike, the CF1250J police model.  Just when the civilian version of the CF1250J (codenamed CF1250G) is not clear.  It will reportedly have a passenger seat and different bodywork.  Other than the police accessories, the civilian and police versions should be similar. 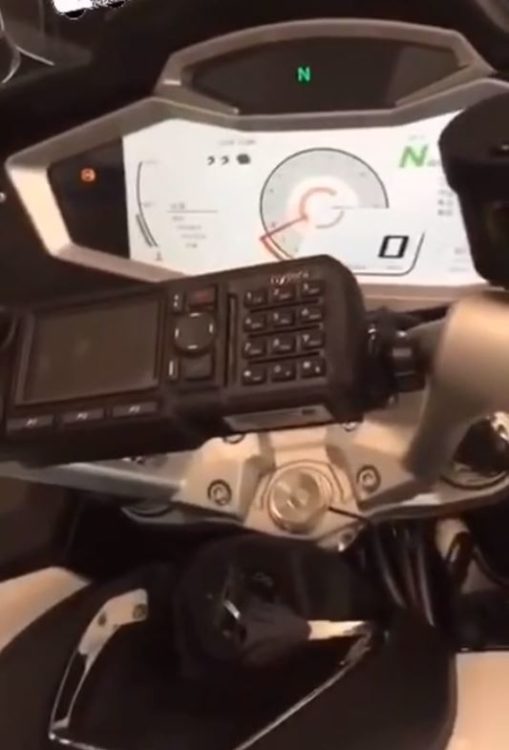 A screengrab of the dashboard of the new CF1250J police motorcycle.

The CFMoto CF1250J reportedly weighs in at 297kg, ready for the street.  That’s somewhat heavier than the BMW R1250RT, which weighs in at 279kg.  That said, the CFMoto police motorcycle’s weight includes all those things that are attached to a police bike that will not be attached to a civilian version.

Bennett’s says the bike’s type approval indicates that it uses a 190/55 ZR17 rear tire and a 120/70 ZR17 front.  It also features Bosch ABS in conjunction with Brembo calipers.

A search of the internet finds a couple of very brief videos showing the machine. One video provides a glimpse of the overall bike while the other has a view of the dashboard and the bike’s exhaust note.

All in all, the bike appears to be a substantial machine.  We’ll keep you up to date as more info emerges.