You have more than one passion. Adventure riding may be at the top of your list, but there are other things in your life that drive you as well.  For example, let’s just say that you are a musician and music is a close second or perhaps even first in your line of passions.  You’re on the road and you want to play.  But musical instruments don’t generally fit into the list of things you pack and take with you.  Especially if it’s an instrument as large as a guitar.  So no music for you eh?

Bring the Ciari Ascender with you.

Well perhaps not.  Perhaps you can bring your full-size guitar with you.  Especially if it is a Ciari Ascender folding travel guitar.  A guitar specifically designed to be folded in carried in a small backpack or case for travel. 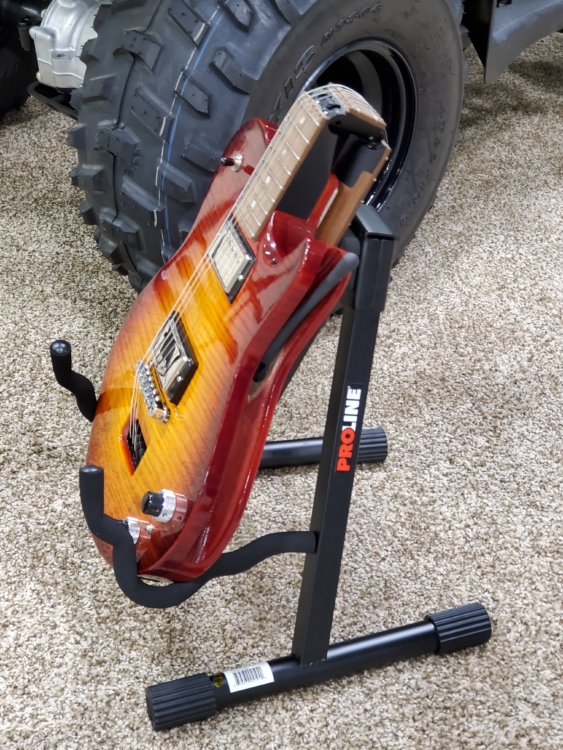 The key to the guitar is its patented folding mechanism.  I am not a guitarist, but Ciari says that their patented mechanism “includes a mid-neck hinge, translating truss rods, and a floating bridge which collectively allow the Ascender guitar to fold symmetrically in half”.

Its pickups consist of a pair of Seymour Duncan ’59s and Ciari claims that no compromise has been made to the tone and bright attack of the Ascender.  Six specially designed v-grooves just before the 12th and 14th frets where the neck splits into two places to fold backward.

The grooves provide a unique string management system allowing the strings to follow the fold keeping the stings safely in place and in tune when the neck of the guitar is folded.  We spoke with Ciari Guitar’s CEO Jonathan Spangler who made it clear that once the guitar was unfolded, it remained within 1/2 intonation of its original tune.

To give you an idea of the guitar’s sound through the prototype top box amplifier, check out the video below.   Since we were at AIMExpo, the amp was not turned up and you can hear the crowd background noise.

Ciari has also developed a prototype top box that acts as a carrying case as well as an amplifier.  It would allow you to carry your guitar and play wherever you go.  The box should be ready for production in the not too distant future.  For those of you that want to save your top box for other supplies, Spangler said they would look into making a pannier based version as well.

Pre-orders for the Ascender are being taken now.  It will be available in January 2020 in black for $2,999.  That’s not inexpensive, but its the price you pay for a quality guitar that can go anywhere easily.