There is more than one lot of Alps

On the map, it looks like the small intestine of a long and ravenous beast. On the ground, it’s more a road seemingly designed by a motorcyclist for motorcyclists, through some of the most beautiful scenery on Earth. To the careful observer and seasoned rider – possibly on the second or third run up and down this marvel when you have some attention to spare from making sure you really are lined up properly for the next hairpin – it raises a mystery.

Ugly steel ‘safety’ fencing (we call it armco in Australia; I believe your name in the US is guardrail and in the UK it’s a crash barrier) is still blessedly unknown in many parts of France. Mind you, the time-tested alternative here is not necessarily much better. It consists of foot-high and six- or eight-foot-long stone barriers alternating with the same length of… nothing. But that’s not the mystery. 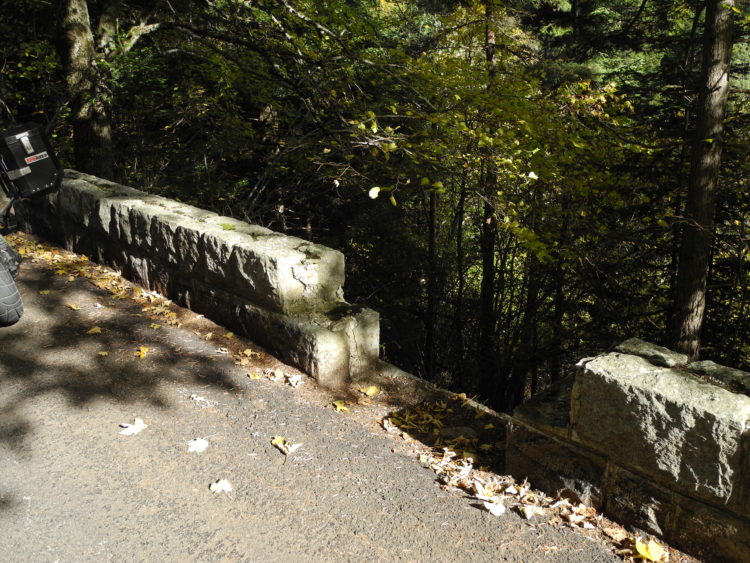 The mystery of the Col de Turini – what has happened to all of these safety blocks?

The mystery is why so many of the barriers have the ends knocked off them. Sometimes the stones that have been removed are still lying there, but more often they’re gone, leaving just some ineffectual-looking mortar behind to show where they’ve been. I peered over the edges of the steep drops a few times but there were no cars or bikes lying in the forest far below.

I did solve the mystery, but more of that later. 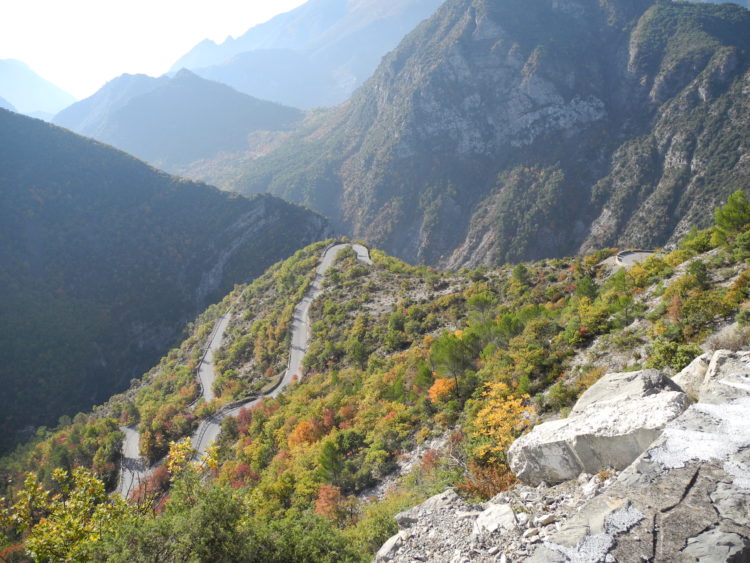 It would take a considerable amount of courage just to decide that you could build roads in this terrain.

The road that leads from Sospel above Monte-Carlo up to the Col de Turini is the D2566. You can pick it up as far south as St Agnès, where it leaves the A8 motorway. This is also a good place to fuel up; if you don’t, remember to do it in Sospel because there is no fuel for quite a way up in the mountains.

When you’re ready to leave Sospel you have 25 kilometres of some of the most wonderful road on the planet in front of you. The pass is a mile above the Mediterranean’s water level, and from its starting point the road gains 1244 metres. Traffic on this road is light, which is just as well. It is narrow and, unsurprisingly, just about all uphill. With a good road surface and the painstaking surveying of the road it was considered for the honour of being named the best driving road in the world by the Top Gear TV series team, before losing out to that road with the difficult-to-spell name in Romania. 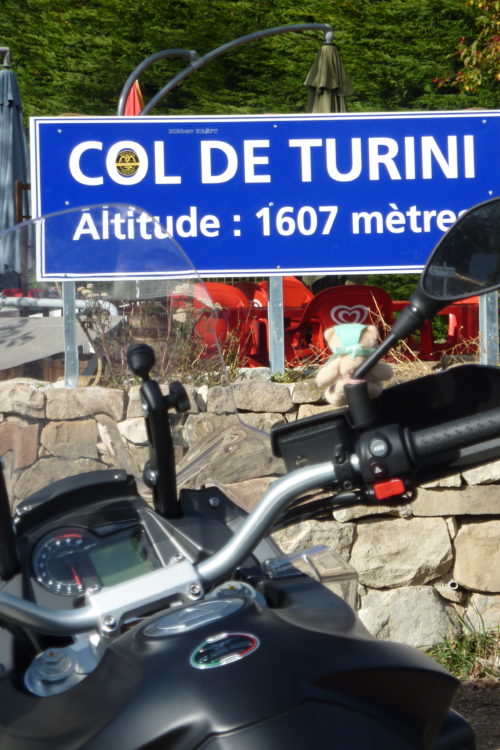 From Sospel, the road begins fairly mildly but soon gets its mojo on and twists and turns – like the small intestine I mentioned above – into the Mercantour National Park. At the top you’ll find three hotels of varying expense and facilities. I prefer the Hôtel les Trois Vallées (les3vallees-turini.fr) over the Hôtel Les Chamois (hotel-les-chamois.com) and the Hôtel Le Ranch (ranch-turini.com) for one main reason: this is where a stage of the annual Monte Carlo car rally stops. You can tell because the walls are covered with photos of the rally cars. 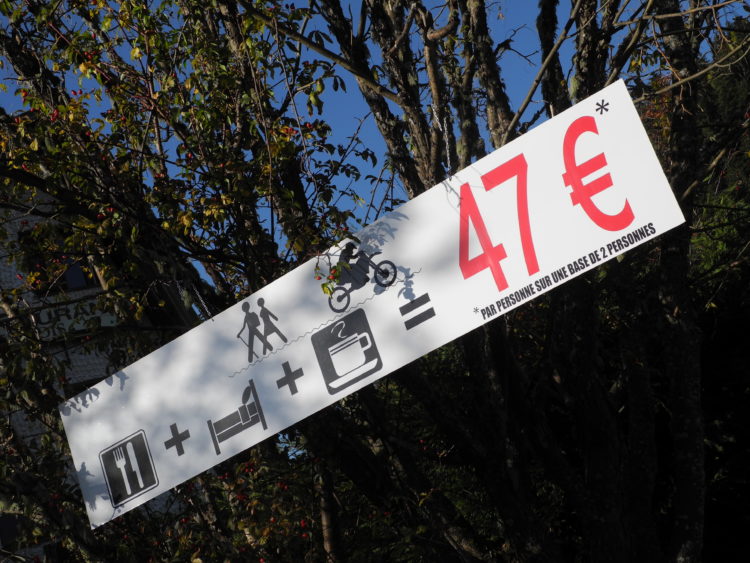 The Col de Turini is famous, but hotel prices at the top are still reasonable.

One photo shows a Porsche, one of the insanely expensive rally specials, up to its windowsill in snow. That explained the previously mysterious damage to the stone barriers. If you were driving this road at speed in three- or four-foot deep snow you’d knock the edges off the road barriers too. Even if you were driving a car that cost something like a quarter of a million dollars…

Until recently, this stage was driven in darkness on what the watching fans called ‘the night of the long knives’ after the sharp beams of the super-powerful rally lights. 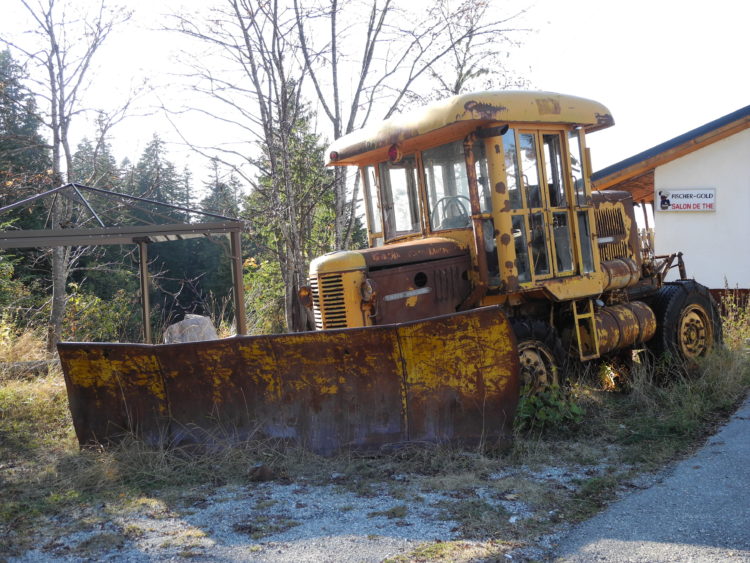 “It is time for the clearing of the neige, Pierre. Start le tracteur!”

Out of rally season, which is January, all three of the hotels are very reasonably priced and the food at the Trois Vallées is both excellent and good value.

The road continues for 15 kilometres down into the valley of the Vesubie River at La Bollène-Vésubie. While its construction is probably even more adventurous than on the southern side, it is more settled and you don’t quite get the feeling of riding through a primordial forest where no-one else had ever been except in somewhat dinged rally cars. The D2566 has featured in three Tours de France, and is still sometimes included in cycling races. You might like to find out if one 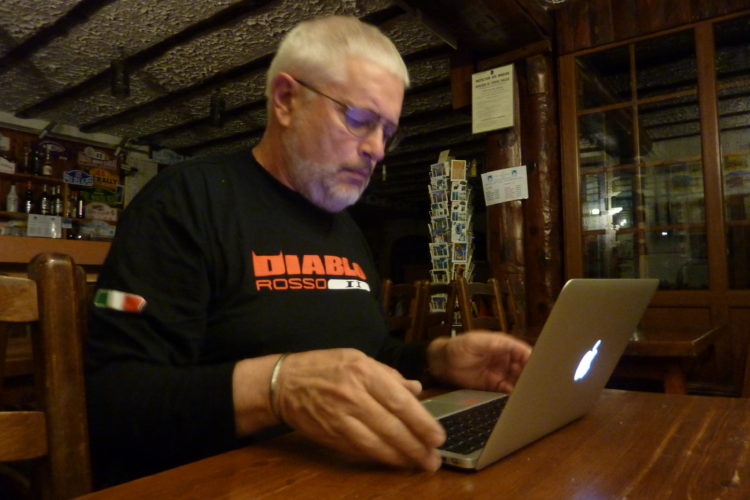 Slightly patchy wi-fi at the top. Time for another glass of sancerre, I believe.

of those is scheduled forb the time of your visit. I don’t imagine the ride, even if the road wasn’t blocked, would be much fun if you were mixing it with a few dozen pushbikes. The phone number of the Sospel tourist office is +33 4 83 93 95 70.