It might be hard to believe today, but there was a time when we nearly lost BMW motorcycles. In the 1970s, the board was beginning to despair of the future of its by now minor division. Bikes might have been what saved the company in the ‘20s, but 50 years later sales were down and continuing to fall, and the fact that this was BMW’s own fault hadn’t penetrated. It would take Hans Muth to revive the marque with his design of the beautiful R 90 S, but he wasn’t the only one who worked on the salvation of the bike division. He was, however, the successful one.

Another project did not do so well. We should probably be grateful to the gods of the road for that.

In the summer of 1979, the company board decided that BMW needed to show that its horizontally opposed twin with shaft drive was not, as many people were saying, a tired relic. They also wanted to put the Japanese on the back foot by doing something  novel very quickly. But they didn’t trust the motorcycle division with the project. The press release noted that the bike people “had more than enough to do in Munich with current development work (and maybe because they were a little scared of in-firm nearsightedness, which they did not want to risk)”. 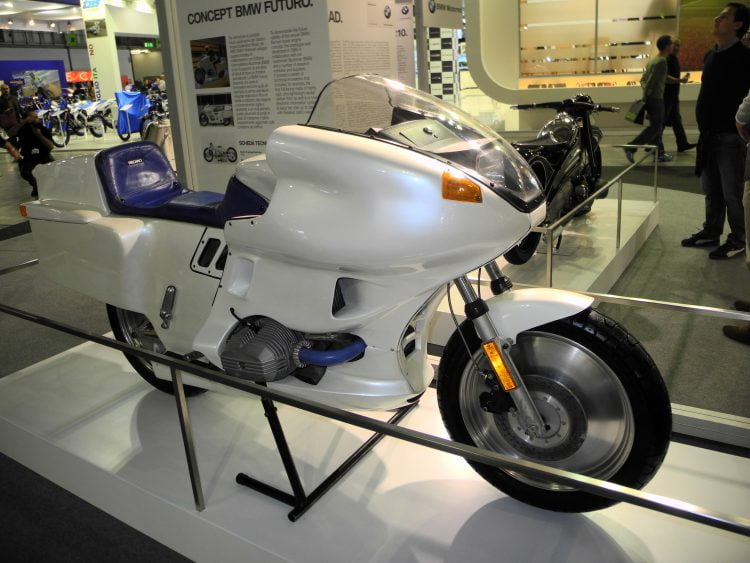 On the stand at the Cologne show, the futuro was sadly overshadowed by the Katana and the CX500 Turbo.

Yes, that was in the press kit that was released when the resulting study, the ‘futuro’, was show at the Cologne Motorcycle Show in 1980. You don’t see that kind of naked honesty these days.

But perhaps those words reflected the tension between different sections of BMW; the motorcycle division was not yet ‘BMW Motorrad’ with its own board, but just a part of the mother company. Nobody is really sure why, but the contract to develop the futuro study went to a Frankfurt firm which had had never had anything to do with motorcycles, b&b. They had mostly produced things like modifications for Porsches and electronic dashboards for VW Rabbits. And what was it with the Germans and their reluctance to use capital letters? 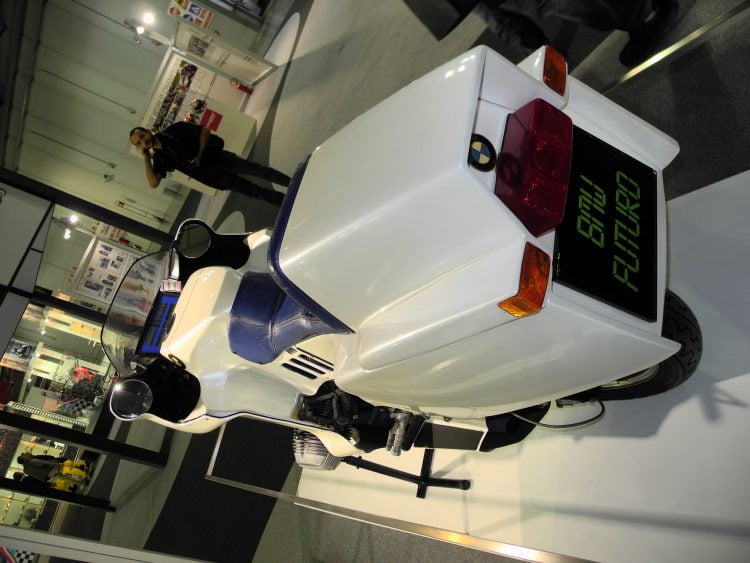 The bike even had a ‘boot’ like a car.

Anyway, and predictably enough, they created what looked like a two-wheeled car.

The b&b development engineer responsible for the futuro, Eberhard Schulz, had never worked on a motorcycle before. He had carte blanche, however, being told to come up with a design “completely regardless of current technical feasibility”. He also had at call the skills of people like former BMW director and “motorcycle whisperer” Helmut Boensch, engine specialists Dr Schrick, experts from the Batelle Institute and experts from TuV. Oddly enough, he came up with a perfectly technically feasible vehicle. An expensive one, it’s true, but not a truly futuristic one. 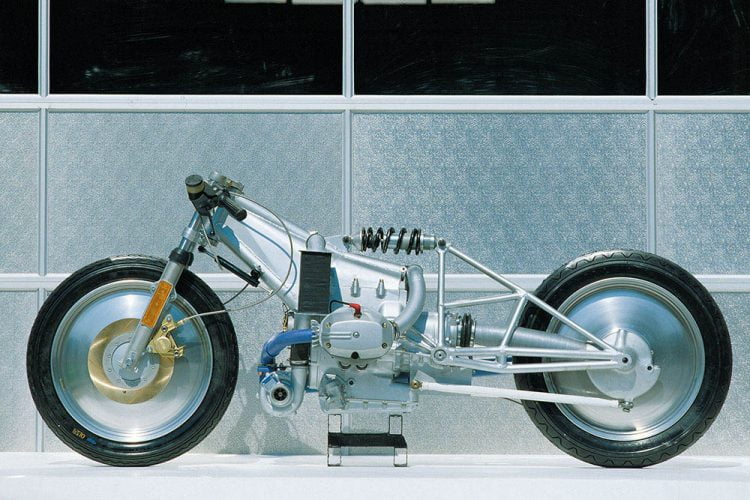 BMW had learned from the development of Hans Muth’s R 100 RS that optimised aerodynamics could make a big difference to the performance, and that lesson was applied to the futuro along with drastically reduced weight of 180kg. Aluminum, carbon fibre-reinforced plastic, titanium and Kevlar were incorporated in the bike, but apart from the cantilever rear suspension and sintered brake discs (not entirely new) there was not really much new technology. Well, apart from the VW Rabbit-like dash.

It’s difficult to understand why b&b went for a turbocharger for the 800cc boxer engine. The stated intention was to improve low and midrange performance, something that a supercharger does much better – and BMW had substantial experience with superchargers on its race bikes. Perhaps it was the knowledge that the Japanese were working on turbocharging bikes that convinced b&b to do the same. 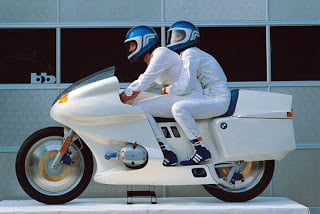 I’m not sure if the pillion was intended to follow the rider as he flew over any obstacle in a crash.

The turbo made the exceptionally light bike quite quick, and possibly as a way of diverting criticism from a motorcycle that could reach well over 200km/h, BMW and b&b described the futuro as a safety design. Various bits of it, including the disc wheels, were intended as crumple zones and the seating position was set up so that the rider would be propelled over the obstacle in case of a crash. There was even a suit designed to be worn with the bike which had airbags built into it. 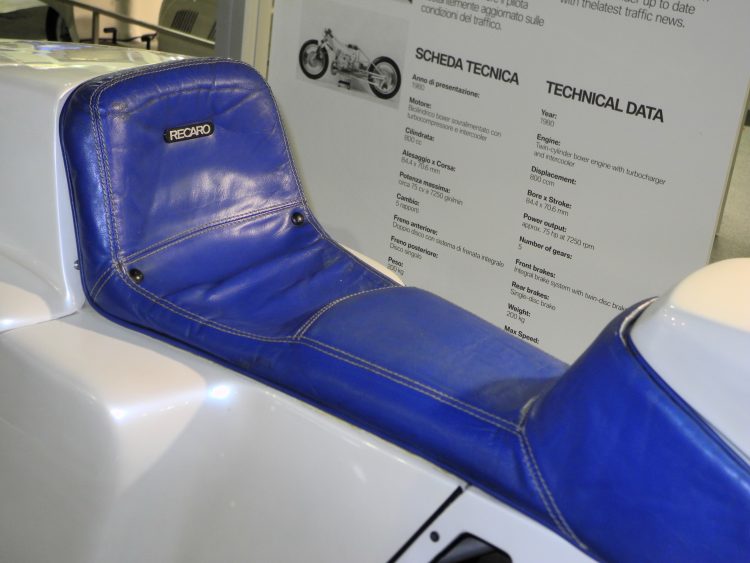 The seat, I suspect, shows just how little the designers knew about motorcycles.

The press release concludes rather gnomically that “One thing is certain: the typical BMW qualities of today will still not be yesterday’s tomorrow.”

The Cologne show must have provided sweet revenge for designer Hans Muth. Stymied again and again at BMW, he had had to go to Suzuki to realise his most dramatic dream – the Katana. It debuted at the same show as the futuro and, along with Honda’s CX Turbo sucked up all the oxygen in the show’s halls. As for getting ahead of the Japanese, the futuro was a design study which BMW itself acknowledged would never be built as such – while Honda’s Turbo was already a production model.