Ever wonder where those little red bottles on every table come from?

You’re probably used to thinking of the salt mines as places of penultimate punishment; not quite execution but the next worst thing. That’s enough to give any kind of enterprise a bad name. Not down in Louisiana, though. Down there, the salt mines are a vital part of an important and popular industry: the manufacture of hot sauce; specifically, Tabasco.

My buddy Mike and I had flown into Baton Rouge, collected a couple of rental bikes from Baton Rouge Harley-Davidson and headed west. It was Saturday, and Café des Amis in Breaux Bridge was calling with Zydeco and Cajun cookin’. After getting our fill of both we moved on to the Blue Moon Guest House in Lafayette, a blues venue with a bar and rooms to let. Perfect. That evening over more Cajun food, Mike rolled the ubiquitous bottle of Tabasco in his fingers and mused, “This stuff is made around here, isn’t it?” 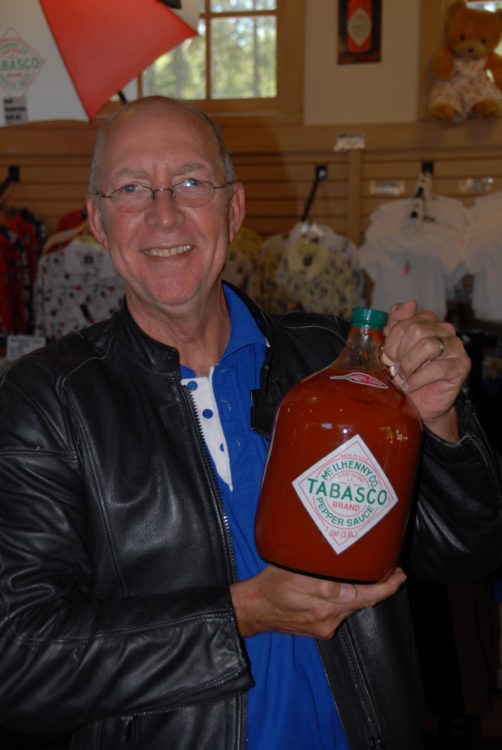 No, Mike, we can’t fit that into the Harley’s panniers!

Indeed it is. It has been made on by the McIlhenny family on Avery Island, Louisiana for more than five generations. Edmund McIlhenny founded McIlhenny Company just three years after the Civil War, and began manufacturing Tabasco brand pepper sauce in 1868. He received letters patent for his formula in 1870, and the same basic process is still used today.

“All of our peppers are picked by hand,” says the company’s website. “Pickers ensure ripeness by comparing the color of the peppers to a small wooden dowel, ‘le petit bâton rouge’, painted the preferred hue of Tabasco red… A member of the McIlhenny family personally selects the best plants in the field during harvest. The pepper seeds from those plants are treated and dried for use in the following year’s crop.

“Our pepper mash is aged and perfected in white oak barrels for up to three years. This process creates the subtle flavors unique to Tabasco Sauce. Every batch of pepper mash is personally inspected by a McIlhenny family member to ensure the highest quality for our sauces.” 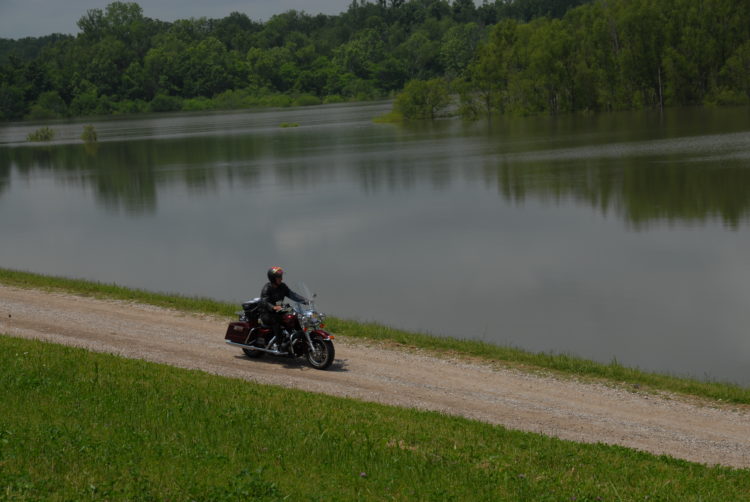 Riding the bayou trails is a thoroughly pleasant experience and you never know when you’ll find a boudin shack. 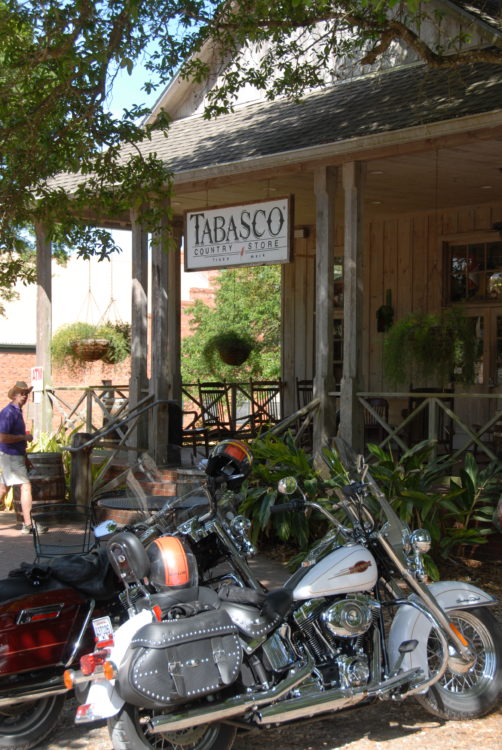 The shop at the factory offers a vast range of Tabasco-related products.

I imagine that keeps family members busy, seeing that much of the pepper crop is grown in Central America. But the factory is not on Avery Island because that’s where the peppers are grown. The island is actually a huge dome of rock salt, three miles long and two and a half miles wide, which is the critical local ingredient. It was created by the upwelling of ancient evaporite (salt) deposits that exist beneath the Mississippi River Delta region. These upwellings are known as “salt domes.” Avery Island is one of five of them rising above the flat Louisiana Gulf coast.

The only other ingredient is vinegar, and the sauce – actually the sauces – contain no calories or fat. There are eight different flavors: Original Red, Green Jalapeño, Garlic Pepper, Habanero, Chipotle, Sweet & Spicy, Buffalo Style and Sriracha Sauce. Limited edition is also bottled occasionally.

What is more interesting to motorcyclists is that the island is now almost as much a tourist attraction as a factory location. Open every day from 9am-4pm at a price of $5.50 the attractions include the Tabasco Museum, Pepper Greenhouse, Barrel Warehouse, Blending and Bottling, Avery Island Conservation, Salt Mine diorama, Tabasco Country Store, and 1868 Restaurant. You can see them all on a self-guided tour. As well, there are the famed 170-acre Jungle Gardens and Bird City.

Despite the idyllic surroundings, the Avery Island factory produces all of the Tabasco made, 700,000 bottles per day. Each two-ounce bottle holds 720 drops. Every year, more than 100,000 people visit the island where the only dining establishment is Restaurant 1868. “All of the menu items complement the different sauce flavors, and all of the sauces are available tableside. Island activities also include birdwatching and touring the Tabasco factory and museum.” 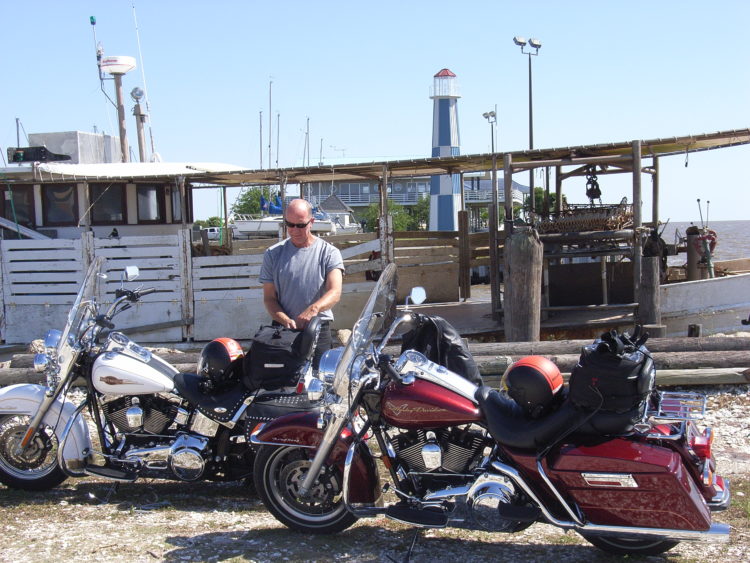 Nearby fishing wharves with their restaurants offer plenty of opportunities to try out the magic sauce.

If you need an idea of the importance of Tabasco sauce in the American culinary world, you might note that a mini-bottle is included in the US Army’s MRE (Meals Ready to Eat) packages. The stuff is distributed to 185 of the world’s 195 countries; “McDonald’s is only in 119,” notes the company. Labels are printed in 22 different languages and dialects.

Mike and I, overcome by Southern lassitude, took I90 south to the intersection with Louisiana 14 and turned east to the right-hand turn into Highway 329, Avery Island Road. Predictably enough, that takes you to the ‘island’ – it is that in name only, although it seems like it when you get there.

You can easily spend half a day there; if you’re a twitcher (bird watcher) make that a whole day or even two. Should you be from the Commonwealth, show some respect; even Queen Elizabeth has Tabasco in her kitchen and the company has had a Royal Warrant since 2009.

There is a lot more I could write about Avery Island and Tabasco, but instead I’ll leave you with an image of Mike and my humble self, settled in the shade outside the Country Store with the best Bloody Marys either of us has ever had, considering that a hot sauce can be so cool.