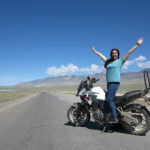 If there is a better way to truly immerse yourself in a new culture than to eat with, and like the locals, I am yet to find it. For me, and many of you reading I am sure, exploring new cuisines goes hand in hand with adventuring.

Being Australian, I am lucky to have access to just about any cuisine you can think of in our vastly multi-cultural society. This is a land that has been built by immigrants. Their traditions, and more importantly, their food culture, is as strong as ever in this country they now call home.

What this does mean though, is although my life revolves around food, I would struggle to define uniquely Australian cuisine. We are a nation influenced by so many (which is wonderful), however we are somewhat lacking in our own culinary identity. To the contrary, when I travel, I find so many truly unique and amazing things in every culture I visit. Every country is an exploration into new food frontiers. It is one of the main drivers to keep adventuring, seeing how people use what resources they have available to them in different and interesting ways.

It can sometimes be daunting to perch up in a foreign country where you don’t speak the language and hope to find something edible. But this is the risk you must take. Walk the streets away from any obvious tourist strips and find little alleys and hidden local gems to try. Watch for a few moments and see what the locals are eating and if you must, politely point at their meals and use your fingers for the number of servings you need. I have always been welcomed no matter how obscure the setting may have seemed for a foreign tourist. Most people love to share their traditions and food with others. It is something that truly evokes a sense of pride and sharing among our fellow human beings.

Even if you don’t like what you are served, it is unlikely that it will have cost much, and it is all in the name of trying local delights and hopefully experiencing something you will never forget. If you are in a city or town large enough to have cooking classes that cater to tourists, I highly recommend taking one. It is a great way to learn from a local about their cuisine, how to order, and what to look out for whilst you are in their country. You may even be able to remember a dish or two to impress your friends with once you get home.

Sitting across from people that have no way of communicating but to see the smile on your face as you devour time honoured recipes is a joy that everyone should experience. Food brings people together at such a basic level. It really is the cornerstone of society. Some of my most memorable food experiences have been in the unlikeliest of places, and that is what makes them so special.

A very memorable meal comes to mind from a roadside stop in Vietnam. Nothing more than a tin roof, dirt floor, and plastic tables and chairs alerted you to this being a place to eat. Of course, my riding companion and I were the only non-locals to eat there, as we traversed the back roads of middle Vietnam. Here in the heat, we sat and ate the most amazing Pho. Large pots simmering, not far from the floor was all that was on offer, we attempted in vain to communicate, it was not needed. That is all they had, and we sat and waited to be served our steaming bowls of clear broth, braised meat and fresh herbs. Unfortunately, it may or may not have been the cause of a less than pleasant bout of food poisoning, which you can read about here! It was delicious, nonetheless. 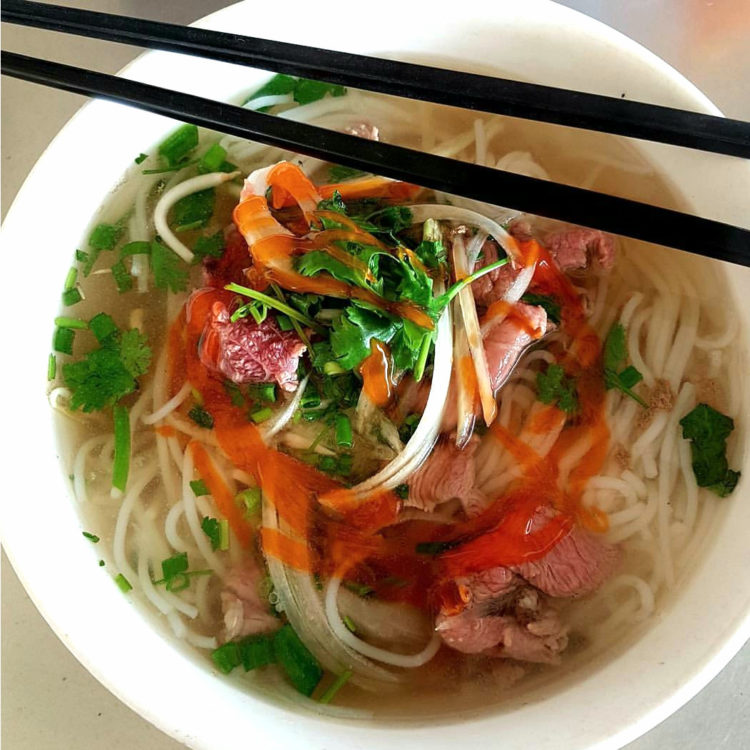 The amazing, but potentially questionable Pho in Vietnam

Thankfully I recovered from that episode, and on my next big journey I was treated to endless opportunities to eat like a local across Europe, Russia and Mongolia. On a particularly miserable afternoon riding through central France, I stopped for fuel and to wait out a passing storm. Alongside the gas station was a café which appeared was attached to the chain supermarket. With nowhere else to be and the rain hammering down, I decided I would have a quick bite. As I entered and sat down, I was promptly served (all in French), from my limited understanding of the menu, I chose what I believed to be a cheese sandwich. I was skeptical if I am honest, as I was at a supermarket café, not somewhere I would ever choose to eat back home.

However, out came my meal, an entire wheel of baked Camembert, perfectly melted. Adorned with crusty bread, French fries, cured meats and crisp salad. I was in heaven. There is something to be said for a culture that still to this day insists on making lunch a proper sit-down affair. Food is to be savoured and enjoyed, not eaten at a desk, mindlessly staring at a screen. It was this that resonated with me as I thought about my life back home, always doing the latter. This is something that I love about food. It has the ability to stir memories or make you think. I promised right then and there, that I would always take time for lunch when I returned home to ‘normal’ life. 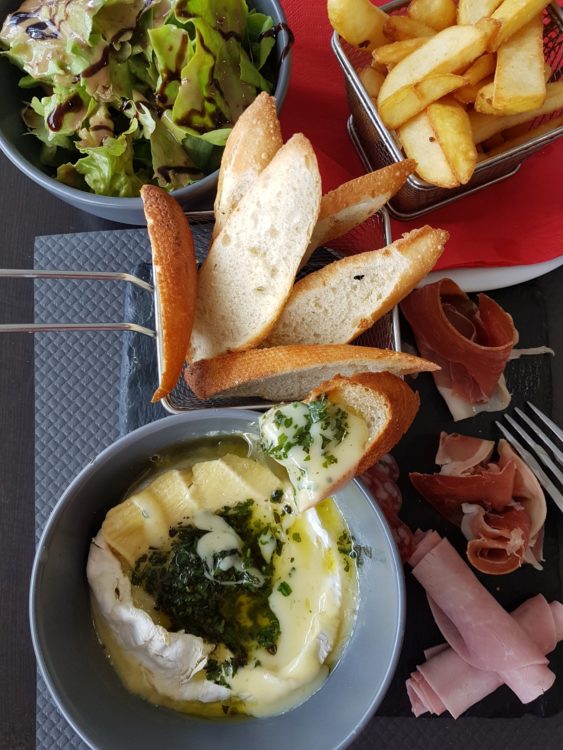 Leaving the familiarity of Europe behind, I entered Russia. A huge, daunting and surprising country in so many ways. One thing I learnt about Russia, was to expect the unexpected, that also applied when it came to dining. Having spent more than six weeks there, I became relatively familiar with the local cuisine. It is far healthier than I had imagined. No breakfast buffet was complete without steaming hot oats, steamed buckwheat and a plethora of salads. I quickly grew accustomed to their way of eating.

Having spent a long day on the road, I pulled into my accommodation for the night. A modest hotel in a small town in central Russia. Rooms are almost identical wherever you go, this was no exception. What I did not expect, was a three-course fine dining meal which cost less than a steak at the pub back home! I showered, put on my only pair of jeans and a well-worn t-shirt and walked down stairs to the hotel restaurant, only to find myself sitting among businessmen in suits. As the cloth napkin was placed across my lap, the penny dropped. It was going to be a fancy affair. From the amuse bouche to the granita for dessert, everything was perfection. 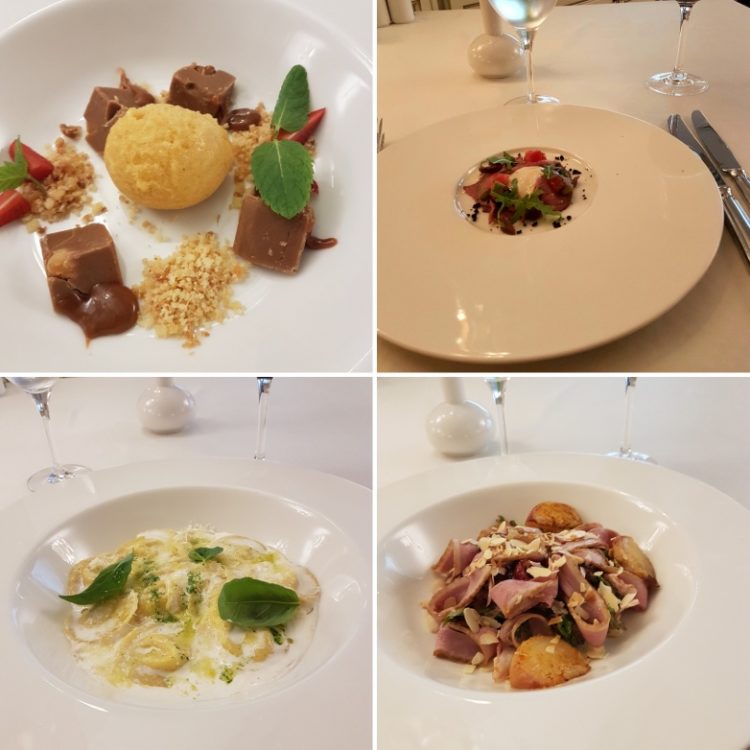 I felt I didn’t belong in my traveller clothing, but I needn’t have worried. Of course, I was welcomed and treated incredibly well. The waitstaff and I going to great lengths to speak with each other about the differences in our food cultures, strange ingredients and ways of eating. After such a long time on the road alone, food had ignited a passionate and spirited conversation that lasted until the last bite. It made me feel connected, and it is a fond memory I will always have of my time there.

Having ridden almost the entire width of Russia to reach the far side of Mongolia, it was time to trade borscht for mutton. Take a hefty bag of supplies if you plan on visiting this place and happen to be a vegetarian. From breakfast to dinner, you will be served meat of some kind. Sometimes you will not be able to distinguish it, but you know it once grazed the earth. Unfortunately, I didn’t find the food in Mongolia to be high on my list of culinary standouts, however, there is one meal in particular that will stay with me.

Having travelled across boggy, sodden earth for more than eight hours, we arrived at a remote yurt camp to spend the night. Only newly constructed, there was still a few hiccups, however this was the first time our group had been the only ones in a camp. With that came exceptional hospitality. The family that ran the facility had, with great pride, slaughtered one of their sheep to be the feast for our evening meal. 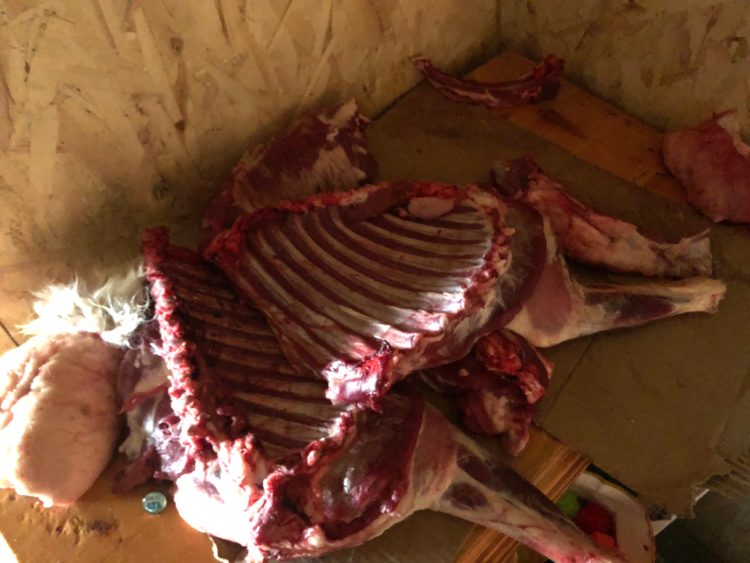 The freshly slaughtered sheep, already on its way to becoming the main event

We relaxed in the setting sun as the whole family set about preparing the animal in many different ways to be enjoyed. Thankfully, we had a native speaker with us who was able to translate each dish which provided extra meaning to the meal. First, we were served a vegetable broth made with the fat of the sheep. It was strong and pungent. With the barren land providing so little, I had a new appreciation for this level of ensuring nothing went to waste.

Grilled meat from the BBQ was served alongside a dense homemade bread as we watched with curiosity as the main event was prepared. White hot coals from the BBQ were placed inside the stomach, along with cuts of meat, offal and vegetables, then tied to create a self-contained cooking vessel. The hot coals not only cooked the food, but also provided a powerful smoky flavour and aroma to the dish. Served with rice, the stomach was cut open and its poached contents divided among us. 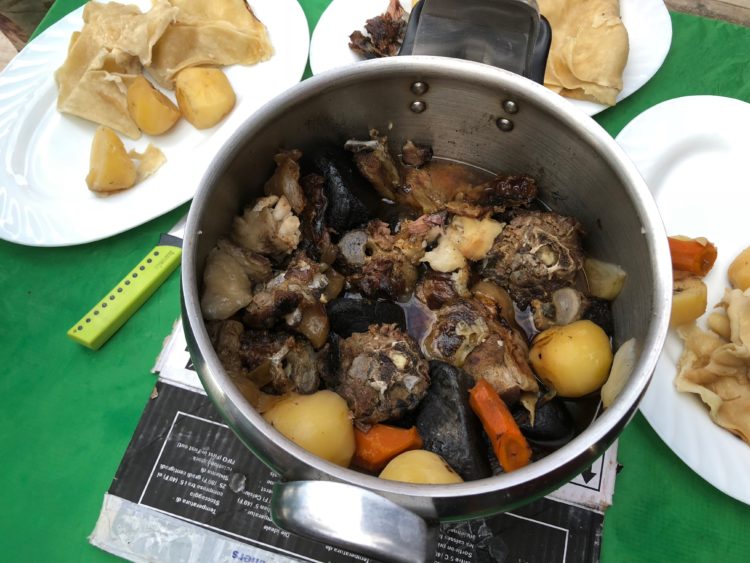 The smoking hot coals added to the meat and vegetables

With only the final course remaining, we were told that this would be the most special, the revered blood sausage. Similar to the famed English black pudding, it was boiled and then grilled before being sliced and served to those of us brave enough to try it. The meal itself whilst filling, had been an overwhelming feast of meat, much stronger in flavour and texture then we Westerners were used to. 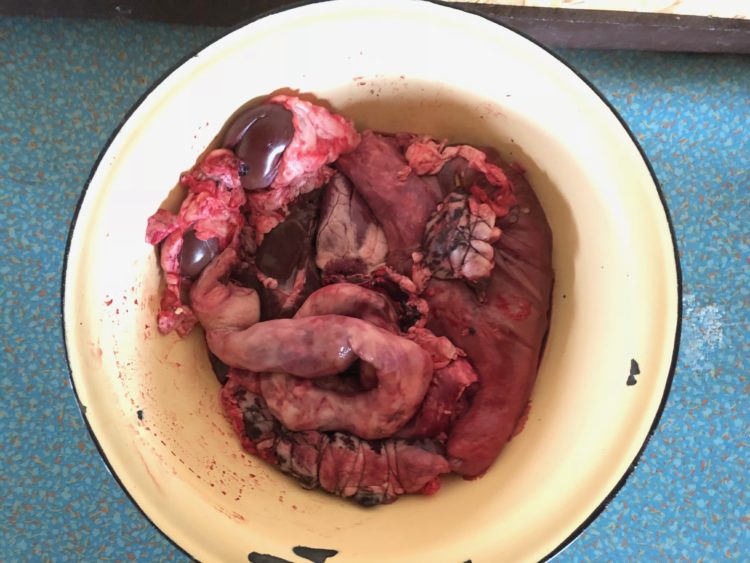 It looks as appetising as it tasted, but nothing went to waste

It was the sheer joy and pride with which it was prepared and served that made it so special. Our local hosts beamed as we gave them a thumbs up after each dish, offering more of what little they had to ensure we were satisfied. Coming from a place where food is never in short supply, I felt incredibly grateful to have been the recipient of one of their precious herd. The time taken to make it a memorable meal and insight into their culture by this generous family was appreciated and talked about amongst all that had the pleasure of experiencing it.

These are literally a mere handful of my most memorable culinary moments on my travels. I could probably write a book about all the meals I have eaten, as they have in some way all added to my travels, and in much larger ways contributed to my knowledge and understanding of each new culture I encounter. I feel very lucky to have the ability to discover new ways of life, try new delicacies and connect with people from all over the world through the shared act of receiving food. I can only imagine the stories of amazing meals from far and wide we have among us in this adventure community. Feel free to share some of your own below.