Boots are critical because our feet control so much of what we do – on and off the machine. I want to tell you about the two types of boots I own, pros, cons, and areas for improvement. 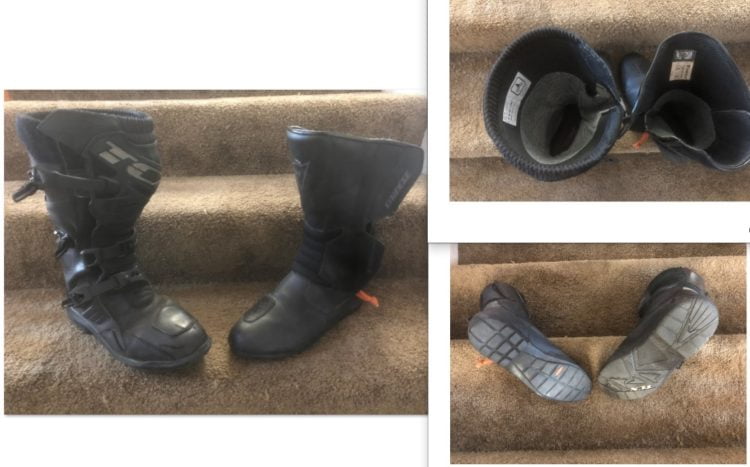 The feel of the Dainese Tempest D-WP boot is superb. Toe shift control on the sport-bike is perfect – better than running shoes with the toe guard and much safer.

These are a fully synthetic boot with a leather look.  Used for freeway commute my first pair of Dainese kept me dry for several years. The only failure was the zipper lever that you grab snapped off (both pairs of Dainese boots I’ve owned suffered this failure – my workaround was adding a zip-tie plus lanyard – the orange line in the picture above).  I then used the Dainese Tempest D-WP for one month off-road in Mongolia on my 2006 Kawasaki KLR650.  You tend to log miles walking off-road conditions to assess upcoming challenges, such as what is over that next ridge, or to get different angles on the next water crossing.  All this walking, along with standing on the foot-pegs for extended outback bumping, had flexed the sole enough that it cracked, albeit imperceptibly, but enough to let water in.  With the one month long Mongolian ride complete I flew home to California and bought my second pair of Dainese  and continued the daily commute routine around San Francisco Bay.  Note:  The zipper clasp on the second pair also failed – the same workaround avoided customer service and any logistic challenges. For me the workaround was an improvement in functionality.  The soles on the second pair show no signs of cracking.

My next big ride was from Mongolia home to California via Russia, Europe, North Africa, and North America on my 2006 Kawasaki KLR650. For this ride, I selected the TCX BAJA GTX. 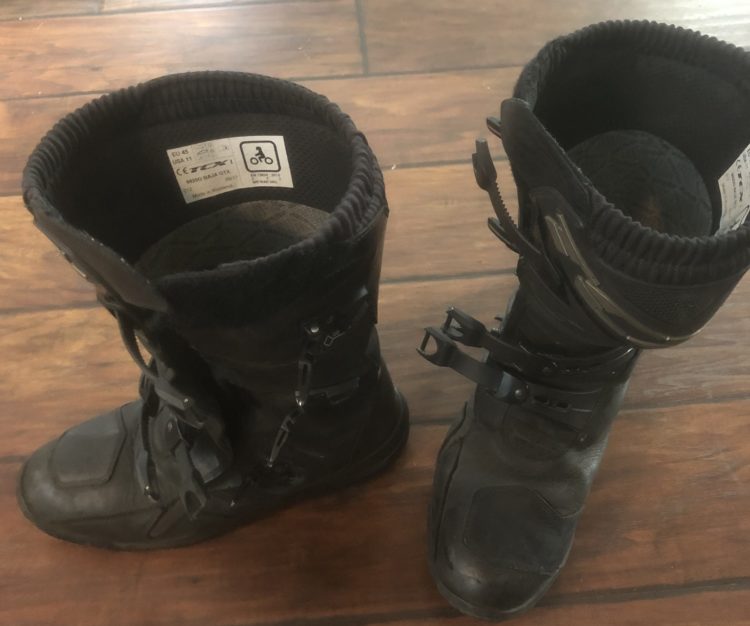 This boot is a traditional three buckle off-road boot.  Utilizing leather and GORE-TEX.  As with Dainese, TCX, is an Italian company with production facilities in Romania.  The TCX BAJA GTX  boot is significantly heavier than the Dainese Tempest (Dainese 1lb 10oz,  TCX BAJA GTX 2lb 8oz), however, the feel is surprisingly nimble post break-in.

The flex for shifting is surprisingly good whereas shin armor, heel protection and sole thickness instill confidence to attack all off-road conditions.  Construction is of high quality.  I have only one design concern with the upper buckle, shown in the video below. In short, it’s removable! Don’t lose it.

I bought all these boots and I’m giving you my straight feedback. For me, the Dainese Tempest D-WP is a modestly priced paved road all season boot but be prepared to fix the zipper and watch for cracks in the soles.  The TCX BAJA GTX is an expensive off-road boot that can take you around the globe – just don’t lose that upper clasp in outer Mongolia!