Today, Stage 3 of the Dakar Rally was going to be long both for the competitors and me. The Dakar riders had to do a tough 340 kilometers though the desert, then ride the liaison stage for some 500 kilometers on the Panamerican highway. Me, I had to cover 560 kilometers from San Juan de Marcona to Arequipa to greet them at the bivouac. After mere 4 hours of sleep next to a generator and a South African car team, I felt exhausted but, making my coffee at the main gate of the San Juan de Marcona bivouac and watching the riders leave, I knew it was all worth it. 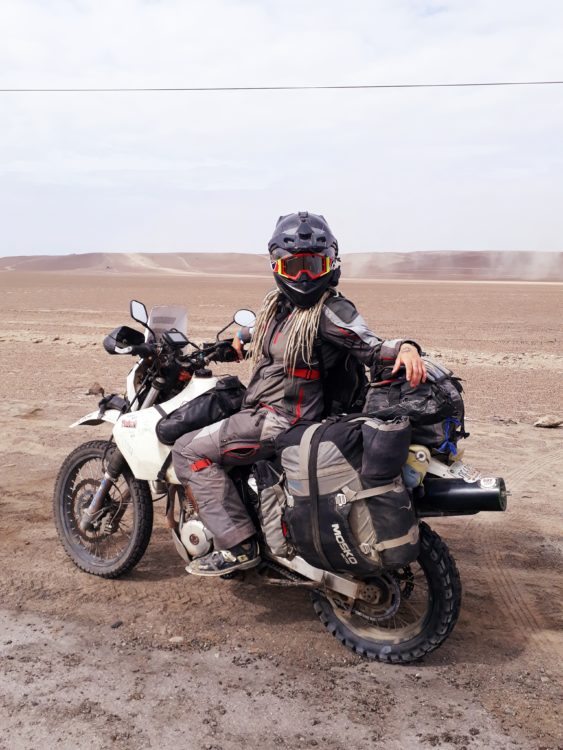 I couldn’t catch up with them at the spectator areas as I left a little later and decided to skip the finish line today just to make it to the bivouac. The later I arrive the harder it is to get the pass, so I wanted to make sure I get to Arequipa before 7pm. For me, the Dakar is so much about the bivouac because while the race begins in the dunes, it doesn’t stop there. In the bivouac, it continues with riders and mechanics fixing the bikes and going over their gear and roadbooks. It continues with malle moto competitors working on their own motorcycles until 1 am only to get up three hours later for a 5am start.

The road from Marcona south is beautiful in the sun, white and yellow dunes on the one side and white cliffs diving into the Pacific ocean on the other side. I had tough time admiring the beauty of the nature; all I needed was fuel for Lucy, and RedBull for me. Much like with the Italians and the prosecco, I earned some beers with the Polish press team today by creating a WiFi hotspot from my phone in a gas station. They needed to upload a video but all along the coast until Chala, all you get is tiny fishermen’s villages and WiFi is hard to come by.

This is yet another amazing aspect of the Dakar – everyone is always ready to help each other instantly, without any hesitation. The South Africans at the bivouac made sure I had enough water. I gave my camelback to a malle moto rider who tore his and didn’t have a spare. The Lithuanian car team got me a bivouac pass and apple pie; I made delicious espresso for the security guys this morning. It’s just part of it all, and it comes so naturally to everyone here that it makes me wonder why we don’t do this more, and more readily, in “regular” life.

Around noon, first riders began appearing on the Panamerican highway. I felt I had to eat something, or I’d pass out riding, so I stopped at a gas station to find some food. As I was eating chicken and rice, Adrien van Beveren rolled in on his Yamaha. He looked exhausted and hot and only grabbed a few cold drinks before rushing out again but, between putting his helmet on and taking off, he still signed people’s flags and posed for photos, smiling and shaking hands. I was barely able to say “chicken” at that point and only stared at people. 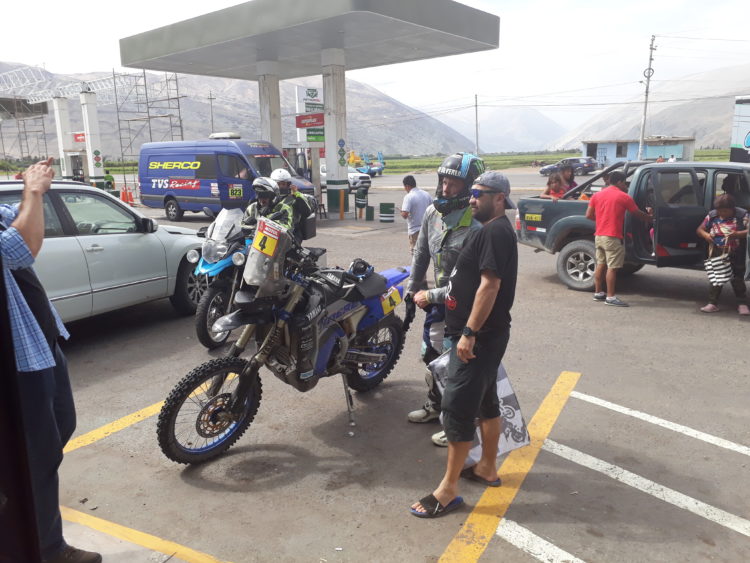 Towards the evening, the road shot up towards the mountains and the air finally got cooler. The road was busy with traffic, mostly Dakar vehicles – support technical and press teams – moving slowly towards the Arequipa bivouac.

As the dusk set in, I noticed a rider kneeling at his bike on the road. I hit the brakes and turned around, but the rider was already swinging his leg over the saddle. He gave me a thumbs up but, as he started riding, I realized something was very wrong with his rear wheel. It was all wobbly and wonky and the bike sort of hobbled along the road, the rider keeping amazing balance. It looked so precarious however that I decided to slow down and follow #132 – Wesley Pittens. His bike had a tiny taillight and no turn signals or hazard lights, so I figured I could sort of protect him a little with Lucy, turn signals on, just to keep the crazy Peruvian drivers at bay. Slowly, we rode across Arequipa that way and I was keeping all my fingers and toes crossed that Wesley’s wheel and tire would hold. He made it all the way to the bivouac.

The welcome in Arequipa was amazing – hundreds of people lined the streets, shouting, waving, and cheering. I felt so festive I instantly forgot fatigue.

Parking my bike at the AirBnB, I hopped into a taxi and headed back to the bivouac. At 11 pm, at midnight, riders were still coming in, having ridden in the dark and freezing cold – Arequipa is at over 8,000 feet of altitude.

I checked in with Nathan Rafferty first. He was working on his roadbook and seemed cool and collected, ready for stage 4. “I’m very frantic before the race, but once it starts, I calm down and get into a rhythm. Right now, I feel good. Today was tough but I made it, the bike is okay, and I’m ready for tomorrow”, – Nathan said.

Next, the malle moto camp. Here, the bikes were being fixed by their riders and some already had injuries. Edwin Straver’s motorcycle’ exhaust was all dented and had holes in a few places. “I’ll fix that during the rest day, just doing the essentials right now. The bike is ready, now it’s just roadbook and hopefully, some sleep! Today was really hard, my riding wasn’t the best and I made some mistakes. I just didn’t have a good feeling at the start, it got better towards the end of the stage. But I made it and the goal is to ride back to Lima, so that’s what I’m focusing on. I’m ready for tomorrow”, – Edwin said.

For Jan Vesely, today was a good day. “I’m happy with the bike. Just did the oil change and the tires now. Everything’s looking good!”. 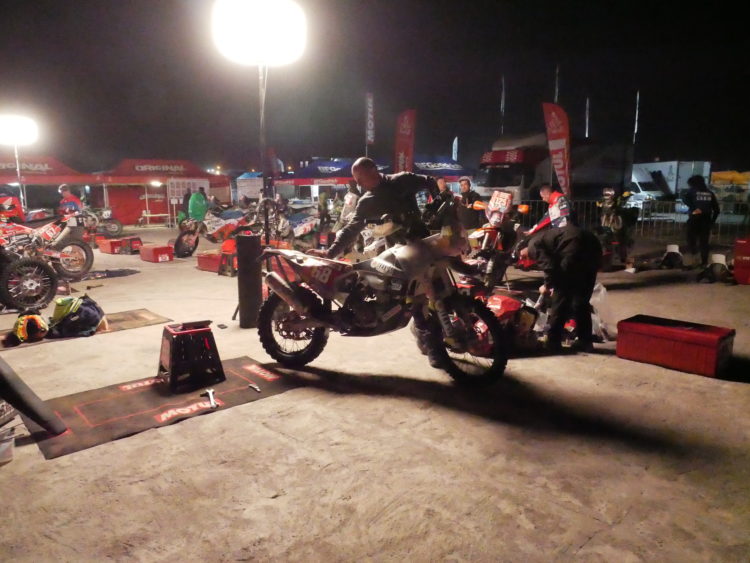 As I left the bivouac after midnight, competitors were still arriving. Trying to grab a cab back to Arequipa, I noticed a lone rider trying to figure out transport. At first, I thought maybe he was a rider like me, just chasing the race, but he turned out to be John Maragozidis, an Australian quad pilot trying to make it to his hotel. I thought that all competitors had people, whether hired or friends, who would take care of stuff like cabs and hotels for them but it turns out, many riders and rivers are doing most of it themselves.

Having found John a cab and deposited him at his hotel, I went back to my AirBnB to sort photos and write up the updates. Tomorrow, the marathon stage begins, and I’m riding to Moquegua hoping to catch the rally riders in the dunes at a few waypoints along the way.

Chatting to one of the Lithuanian car drivers today, Saulius Jurgelenas, I think I am finally realizing what the Dakar is all about. He was talking about his day and stage 3 and tomorrow’s expectations, and all the things that still needed to be done before the start, and I said something like “but that is impossible”.