“Three engines blew today. Three”, – Jan Vesely is standing by his bike, shaking his head. “Just look at my air filter. It’s the god damn fesh-fesh. Every single day… there’s more of it”, – he says, rubbing his yes. He winces as he lifts his arm. Broken rib. No matter; Jan is hellbent on getting to that podium in Lima. 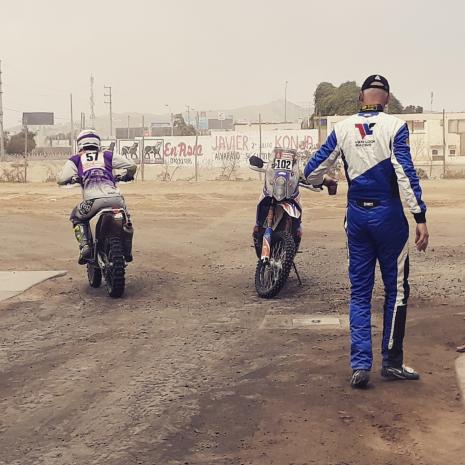 The malle moto camp looks like war trenches now. Everyone moves with so much purpose but so sparingly, understanding each other without words – nods are enough. As riders change out of their gear you can see all the black and blue bruises, taped up ribs, bandages and blood. At 10, 11PM and past midnight, they’re still working on their bikes. Anastasiya Nifontova is changing tires. Edwin Straver is maintaining the chain; Balys Bardauskas is carefully cleaning the air filter. Frederic Barlerin who withdrew at stage 4 is still up just like everyone else, helping others with their roadbooks and bikes. “It’s probably doing me more good than them. Helping riders who are still competing helps me process the fact that I no longer am”, – he says. He looks a little better now. He found purpose again.

Rookies and privateers are just barely holding up, too. “At one point, there was so much dust I only found my bike by the sound. It was absolutely insane, navigating through sandstorms where you have no idea what’s ahead, dunes or drop-offs or rocks… Just get the direction right and push on regardless of what’s there”, – says Arunas Gelazninkas, a Dakar rookie who’s risen to 32nd place in stage 8.

“I hit rock bottom…just absolute rock bottom during stage 7. Had two mid-air ejects and after the second, just sat on my crashed bike at the bottom of a hole, head in hands, feeling like my world was cratering. I just didn’t want to be there anymore and my head was in a really bad place. Finally, to the end of the stage after 13 hours on the bike with a 4am wake up call. Comatose”, – Nathan Rafferty says. He’s back in the game now. His bike is holding up well.

Technical, support and press teams are running on their last fumes, too. There’s less chatting and joking, less beers and less excitement. Evryone is bracing for today’s stage and for the final push to Lima.

So, so close now.