Paul Hurst, a Peruvian Dakar superfan, has been following and chasing the rally in his Toyota Hillux for years now. Together with a group of local volunteers organized by Juan Valdivia, Paul does short trips into the desert to scout out areas the Dakar route goes through and helps to report to the ASO which sections may prove to be too dangerous or difficult for the competitors to go through.

“We usually have these rough tracks and waypoints that Valdivia provides, and we go out into the desert to check them out. Normally it’s a weekend trip, we camp out in the desert, then drive back. Sometimes, these tracks and waypoints are part of the Dakar rally route”, – Paul said. “Most of the time, it’s just small sections, it’s not like we’re in the desert for long periods of time. During the rally, it’s normally a case of finding the highest point you can and listening for the helicopter. Then you see the first bike… and then it all begins”. 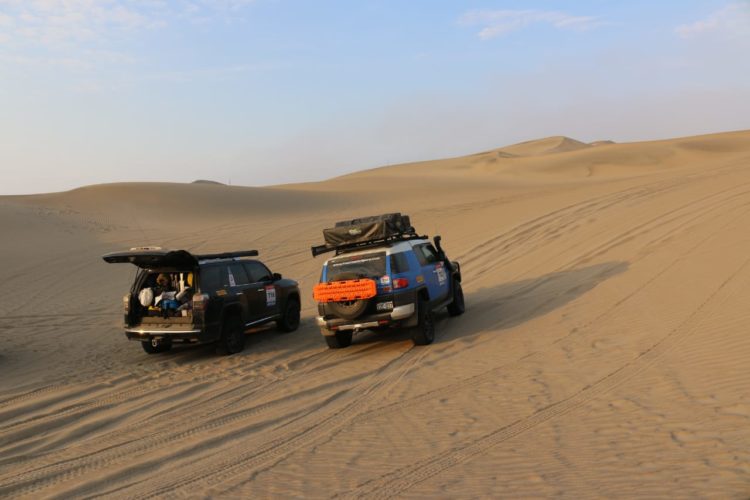 According to Paul, Dakar Rally 2019 route will be extremely tough, but there is one area near the Pacific Ocean where he predicts the most trouble. “Tanaca, an area between San Juan de Marcona and Arequipa, will be brutal. It’s a very tricky section where the sand is soft, and you sink really easy, and the other thing is, the dunes there aren’t your typical nice, rolling dunes. It’s unpredictable, you have so many of those bowl-shaped dips and valleys and this is where most competitors will get stuck”, – Paul explained.

As usual, Paul will be chasing the race in his truck. “The Dakar organizers release the map for the spectator zones three days prior. The simplest way to follow the race is to download those maps and then program your GPS accordingly, you can always double-check it on Google Earth, and then just follow that. It’s not always easy access, but it’s worth it!”.

Curious about desert navigation? Check out this interview on how to navigate the desert like a Tuareg!