There’s a lot of talk saying that motorcycling is dying.  The average age of riders is slowly but steadily increasing.  And, a subset of those riders is “aging out” of the sport.

Many think that the best way to grow new riders is to make smaller and cheaper motorcycles.  Bikes that are easy to ride and cheap to own.  Some think that “eco-friendly” or at least more green motorcycles could also be a pathway to new riders.

And even though “safety” technology has made its way into motorcycles, the targeted audiences of Millennials and Gen Z-ers may still think that motorcycling is too dangerous.  These generations have grown up with seat belts, child safety seats, and airbags.   Could it be that even if manufacturers build a smaller, cheaper bike that those generations will still stay away because of the increased risk of riding a motorcycle versus a car?  That’s a question that Canadian startup Damon Motorcycles wants to answer.

Damon Motorcycles is a new player to the motorcycle market and they think they can succeed where others have failed.  Their plan to achieve success is to address the concerns of millennials and Gen Z-ers as well as the existing motorcycle riding crowd. 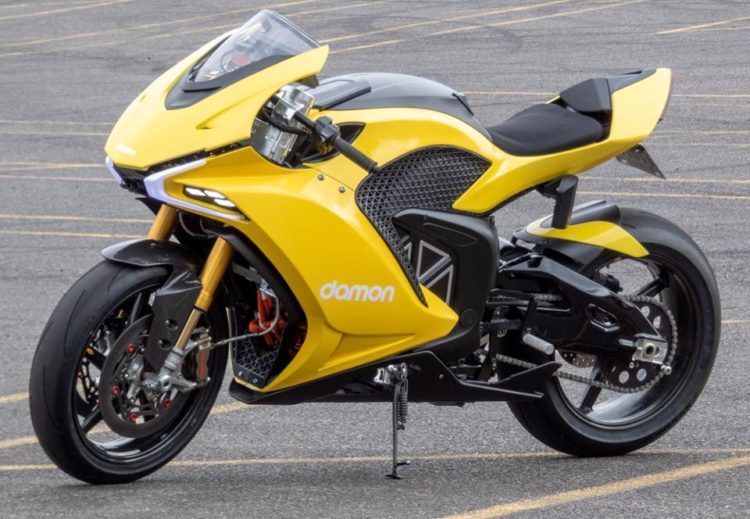 The Damon Hypersport hopes to be a game-changer in electric motorcycle design and performance.

At first blush, they may just be doing that.  Damon rolled out its Damon Hypersport models at this year’s 2020 Consumer Electronics Show (CES) and was greeted with largely rave reviews.  The bike won two CES awards, 2020 Best of Innovation and 2020 Automotive Top Tech.  Damon’s Hypersport machine clearly created a buzz in the tech world, but could it maintain that buzz in the motorcycling world?

The answer presently seems to be yes.  While at CES, Damon opened pre-orders for its Hypersport model and sold out its Premier Limited edition Hypersport in four days.  Selling out those machines while at CES even surprised Damon.  They’ve already presold over 100 bikes and based on current sales, Damon believes that it will pre-sell over 1,000 bikes by the end of the year.

Probably the biggest surprise in Damon’s sales is that approximately 50% of preorders are coming from Millennials.  Somehow Damon is building a machine that this elusive age group seems to be attracted to.  So what is it that is attracting Millennials to Damon’s Hypersport machines?  And, does Damon know something that other electric and traditional motorcycle manufacturers don’t?

Damon claims some very impressive electric motorcycle specs.  If true, their claimed specs likely make them a leader in electric motorcycle “performance”.  Damon touts that its Hypersport model delivers well over 200hp and 200nm of torque starting at zero rpm.  Its top speed is a claimed 200 mph, while claimed 0-60 time is less than 3 seconds.  Those claims are so significant that perhaps a bit of skepticism is in order until Damon makes its first production deliveries.  But if true, Damon has one impressive machine on its hands.

But Damon says there are other things that set it apart from their competition.  With a claimed highway range of 200 miles per charge and a claimed city range of 300 miles, Damon’s Hypersport would lead the field in range as well.

The Hypersport has excellent charging specs as well.  Damon says that the bike can attain a full charge in 3 hours from a standard level 2 charger.  If hooked up to a Level 1 DC fast charger, the bike can be fully recharged in about 40 minutes.

With numbers like those, my skepticism meter began ticking higher.  I needed to understand why Damon thinks it can deliver performance numbers like these while other electric motorcycle manufacturers have failed.

So I asked Derek directly why Damon’s Hypersport motorcycle has specs that other manufacturers don’t seem able to achieve.  He quickly pointed to Damon’s independent battery technology development as well as Damon’s acquisition of electric motorcycle startup Mission Motors’ intellectual property.  Both he said, play a role in providing Damon’s claimed performance figures.

Derek went on to say that Damon leads the way in battery pack development.  Its current battery pack packs a 21.5 kWh punch.  That’s among the largest currently on the market.  And, they’ve been able to make their proprietary battery pack highly energy-dense.  It delivers 200 watt-hours per kilogram of weight.  Energy density is one of the key problems that electric motorcycle manufacturers struggle hard to conquer.

In addition, Damon says mating its battery pack to an electric motor that is able to achieve 12 newton-meters per kilogram torque output is also a significant difference.  With that powertrain, Damon believes that they’ve developed a recipe that supports its claimed performance numbers.

Damon’s CoPilot is a suite of systems designed to provide riders with situational awareness assistance.

Finally, the Hypersport’s performance is boosted by its lighter than the competition all up weight.  Even with its larger 21.5 kWh battery pack, the Hypersport weighs in at 440 pounds.  Other manufacturers like Zero and Harley-Davidson generally tip the scales at about 500 pounds or more.

Looking at the Hypersport’s much lighter weight and much larger 21.5 kWh battery capacity, you can reasonably draw the conclusion that Damon has the ability to deliver on their performance claims.

So is it all that performance that is creating all of Damon’s buzz with Millennials?  Probably not.  There’s still that motorcycle “risk thing” that Millennials have grown up with.  Damon says that they’ve addressed their concerns by developing an electronic safety package for all its Hypersport models.

Called CoPilot, the system is claimed to reduce rider risk by combining realtime environmental surveillance with intuitive rider feedback.  A suite of sensors works together to tell the rider what is going on around the bike and identifies hazards so that the rider can take timely appropriate actions. 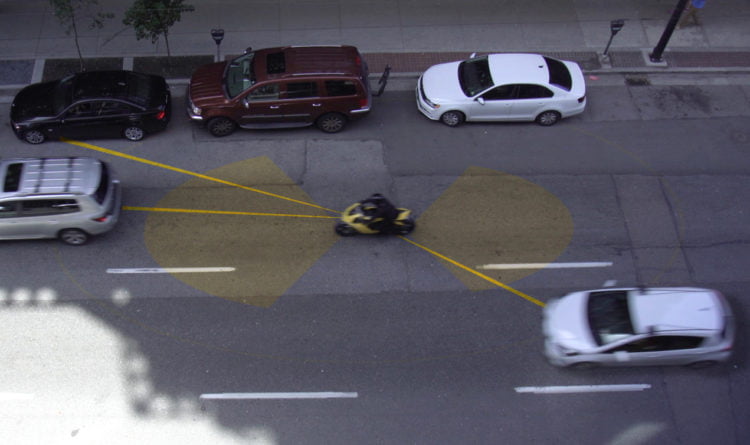 The CoPilot system can monitor up to 64 targets and provide feedback as you ride.

CoPilot features Damon’s patented 360-degree “Advanced Warning System for Motorcycles” (AWSM).  Sensors in the suite monitor the motorcycle’s surroundings (can track the speed, direction, and velocity of up to 64 moving objects around the motorcycle) and pass feedback to the rider via LED visual alerts and haptic feedback through the handlebars and seat.  And, an always-on rearview camera provides a 1080p view to the rear.  Damon says the CoPilot AWSM can provide riders that one extra second to avoid an emergency.

More than a sportbike

So now that Damon has a bike that has excellent claimed performance and claimed improved safety, is that enough to attract both Millennial and Gen Z buyers as well as more “traditional” riders?  Not if you are thinking like Damon.  The company’s Hypersport has one other trick up its sleeve.

That trick is called “Shift” and for many, it could make owning a “sportbike” and a commuter machine possible with one purchase.  Shift allows a rider to change their riding position on the fly with the touch of a button.  Shift technology can make adjustments to the position of the bikes handlebars, footpegs, seat and windshield.

Damon’s Shift system allows a rider to change the rider’s triangle by adjusting handlebars, footpegs, as well as reposition the seat and windshield.

It’s a novel way to solve the sportbike owner’s dilemma; the need for a sportbike and a commuter bike.  With the Hypersport’s adjustability, perhaps you don’t have to make that decision.

Damon says that they are targeting deliveries of its Hypersport Premier machine in late 2021.  But with the COVID-19 pandemic happening, Damon also says that it is looking at its world-wide supply chain and may have to re-evaluate that schedule.

Like Tesla, Damon will also make their bikes available online.  There are no plans to have a traditional dealer network.  However, when service is necessary, it will be performed by Damon service centers who will provide mobile service to your front door by van.   Parts will be available at partnered electric motorcycle dealers.

The price of electric motorcycle success

With the specs cited by Damon, it’s not rocket science to think that the Hypersport models would fall into the premium price category.  And, you’d be correct.  Damon’s entry-level Hypersport HS will set you back $24,995.  That’s more than the Zero SR/F but less than the Harley-Davidson LiveWire.  But both of those competitor’s machines have inferior performance stats.

The Hypersport Premier Limited Edition models have an even more significant price tag of $39,995.  For the extra expense, you get a model limited to 25 examples.  The bike comes equipped with Öhlins suspension, Brembo brakes, and a carbon fiber single-sided swingarm.  Interestingly, even though that’s clearly a lot of money, 50% of the Hypersport Premier model pre-orders come from Millennials. 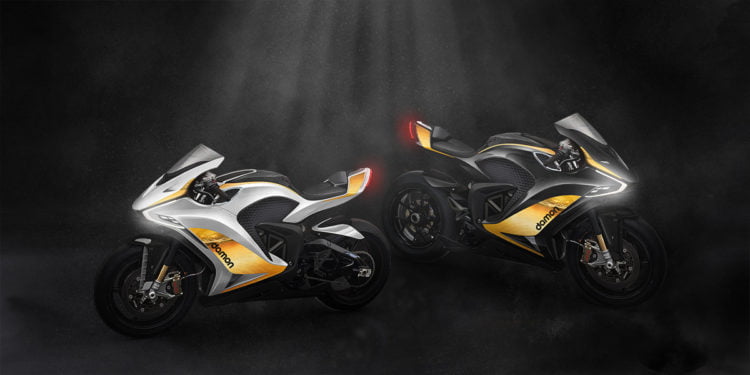 There is another expense that you should consider as well.  Although the Hypersport models can be recharged using a household 110-volt outlet, the size of the 21.5 kWh battery makes charging the bike from 0-100% a more than overnight task.

It’s not that the bike charges more slowly than the competition from a wall outlet.  Its the sheer size of the battery that you are charging that is the driving factor.  So if you are thinking you want to have your bike fully charged every morning with the machine’s max range at your wrist, you may want to consider installing a level 2 charger.  Purchasing and installation of one can cost $1,000 plus.

But what about ADV?

Pavement bikes are great, but what about an electric adventure machine?  To get the ADV community’s attention, Damon will have to produce something that can go off-road.  So I asked Derek if Damon had any plans for an adventure bike.

Clearly, to retain a competitive advantage, most companies don’t like to broadcast what their roadmap for the future is.  Derek had a similar response but he did say that Damon recognized that the adventure bike segment was huge and that Damon was looking at it.

To me, that’s good news.  And, since Derek was previously Alta Motor’s CEO, he knows what off-road riders want and what is necessary to build a machine that can meet the off-road community’s needs and desires.  But first, Damon will have to deliver on their on-road machine.

Damon’s claims are quite impressive.  They are high enough for me to wonder whether they can deliver on them.  If they can, their machine could be a game-changer for the electric motorcycle industry.

There have been many companies that have tried to deliver a bike that brings internal combustion engine performance (power and range), and so far, Zero Motorcycles and arguably Energica probably come the closest.  But if Damon can deliver on its promises, the electric motorcycle landscape may be dramatically impacted.

That said, I can’t wait to get my backside on the seat of one of Damon’s production machines.  I did like Zero’s SR/F, but when all was said and done, I still had range anxiety and missed the snarling growl and “revvy” feel of my KTM 1290 SA-R ICE engine.  If Damon can deliver on its promises, delivering range and performance with fast charging, I’d absolutely think twice about one for a road-going bike.  And that says a lot.

Women on Dirt Bikes in Transylvania
What Could Possibly Go Wrong?