While we have been suffering the harsh winter MrKiwi living down under in New Zealand has been loving life during the same months, enjoying summers (our winter) and pure riding pleasure. 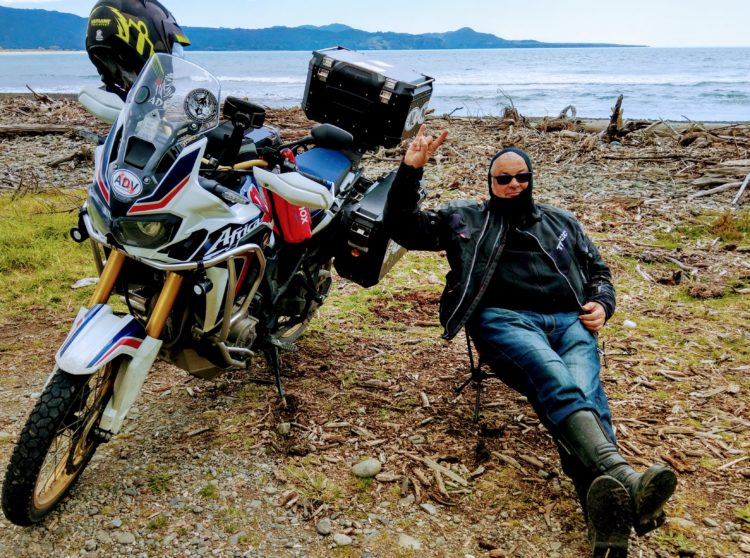 Outside of our urban centers and main roads, pretty much yes. It amazes how much you can pack in for such a small country.

The North Island and the South Island offer quite different riding experiences, with the north being more hill/rolling country with some fabulous coastal riding and the south being more mountainous. There are plenty of gravel roads on both Islands but increasingly these, at least in the north, are being tar-sealed much to my dismay.

Once you are off the main roads, our secondary road system is mostly a joy to ride, with amazing vista’s, lots of twisty roads and not so many cars. Main roads are like in any other developed country, full of traffic and boring riding.

You’ve had quite the selection of bikes, what would be a good all-around choice for NZ riding?

Recommending bikes is often a poisoned chalice as there are so many different views. But in my experience, if you want to enjoy our back roads including the gravel roads, then a midsized bike is all you need.

A couple of early riding shots…

For example, a DR650 like you have been recently riding will happily get you to many places and your new ride kills it. (David’s talking about my KTM)

If you want to ride some of the more gnarly adventure routes then a smaller and/or bike would be handy, weight counts! 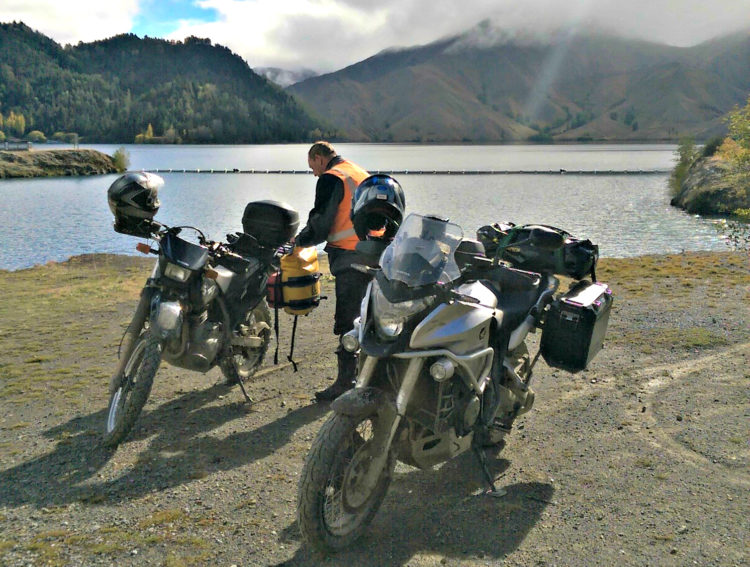 I currently have two bikes one large and one midsize. My large bike I use for two up riding on tar-seal and well-formed gravel roads and my mid-size for riding when I ride by myself with gravel roads/routes being my primary aim.

You had a bike located in Europe for a while, was that easy to do as a none European, can you explain a little about how you did it?

Owning bikes in other countries is not always easy. Some countries will not allow you to register the bike if you are not a resident, which was the case for me when buying a bike in the Netherlands.

I was able to do it because I have a good personal friend in the Netherlands, Two Plugs who offered to look after the bike for me.

So, in the end, I bought a red 1998 Honda XL600V (transalp) which was road registered in his name and insured in his name with me as a listed rider. He took care of it and I paid the bills. The bike is affectionately known as Red. It was good value buying an older well looked after motorbike compared to a new one which attracts lots of tax. 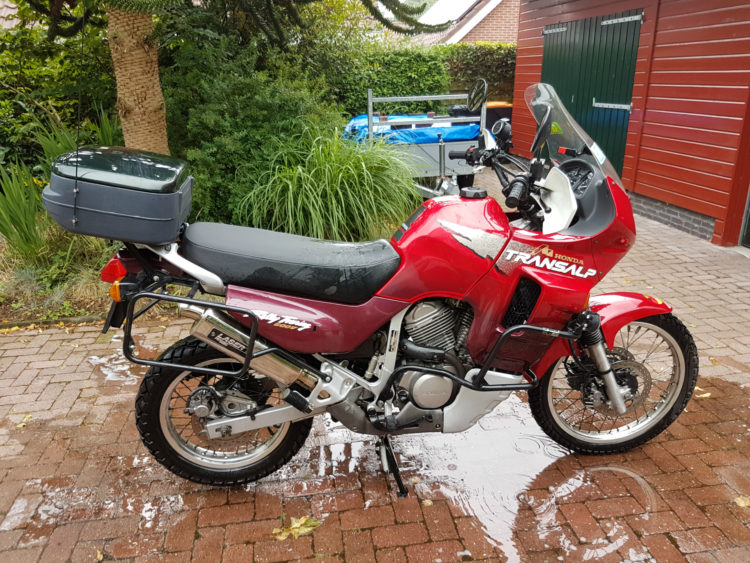 We also had the bike extensively modified, again cheap to do compared to New Zealand as the parts we put on it are manufactured right there in Europe.

If you could only have one bike would you prefer to have it in NZ or Europe and why?

Home in New Zealand, because for sanity reasons I can’t last more than a couple of months without getting on a bike. I ride too often at home not to own a bike. 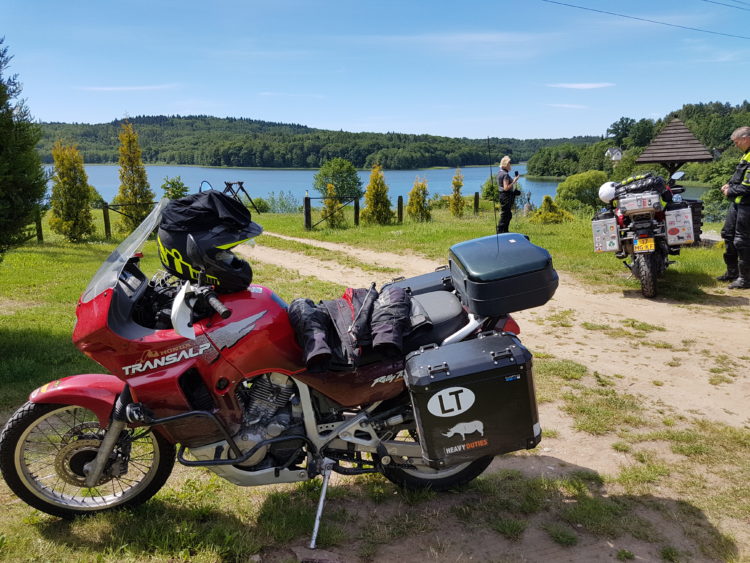 For Europe, the Transalp when I had it there was great for one up riding. However, from here on in I will more than likely be riding with my wife as pillion when I go over, so I will be back to hiring a bike. If I decide to ride for an extended period I would look at buying one again.

I try and get on my bike whenever I can and will often get out for a long day ride. I’m lucky in that I have some absolutely fabulous local roads to ride.

In April my wife and I will do a three day trip to the South Island, and a few weeks back we snuck away for four days of riding up north. 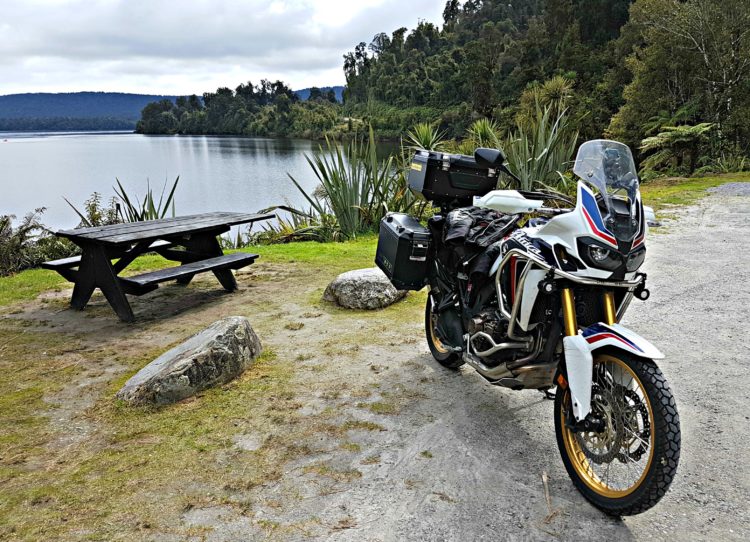 This Easter I am flying to San Francisco and will be borrowing an inmate’s motorbike to ride to Sequoia National Park and back.

She recently came to New Zealand and borrowed one of my bikes. The adventure riding community is great, where else can you meet people on line, get to know them enough to be confident you can let each other use your bikes.

The USA trip is only a week, but it will give me a taste of riding in the USA which I have not yet done. I will be back to do more, as I would like to ride both sides of the continental divide.

Next year I am planning to go back to Europe for about four weeks.

The issue for me is my work set up, it is not letting me get away for than about 3-4 weeks at a time, so for the time being I have do these rides in short chunks. The longest ride I have done so far is six weeks and that really is not good enough. Retirement is coming up soon…

I have two, and they are quite different to each other technology wise. My big bike is a 2017 Africa Twin, the DCT version. 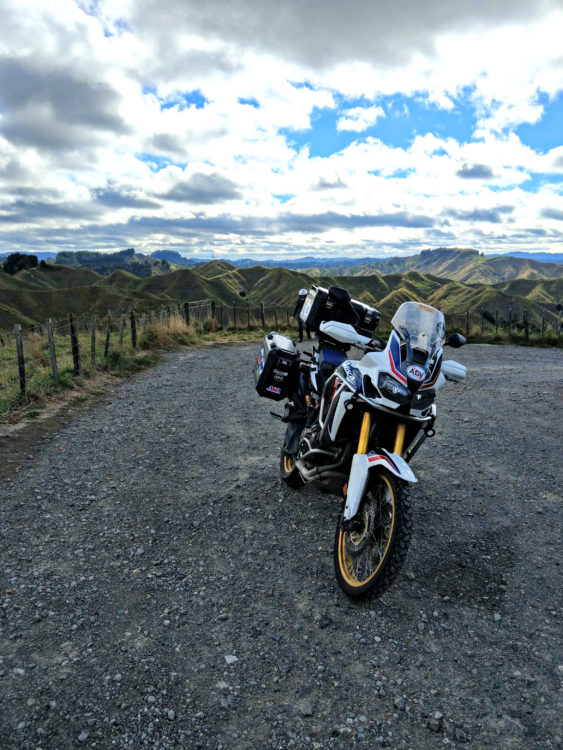 My mid-sized bike is the 1998 Transalp I bought in the Netherlands and then I eventually imported her back home to New Zealand. The Transalp is as manual as they come, fitted with carburettors and plain old hydraulic brakes. It is a fun bike to ride and surprisingly capable.

The Africa Twin was bought for the purpose of modifying so I could have an all-round touring bike for two up riding.

My wife does not ride motorbikes other than as a pillion. The rear suspension has been upgraded for typical load weights for two up with luggage and a lot of other farkles have been added. The end goal being to transform the bike into a heavy duty touring bike capable of riding two up with luggage (and not sag) on well from gravel roads.

I’m not sure I would buy DCT again in an adventure touring bike. But I do like the Africa Twin, it is a good looking bike and the motor in it, while not setting the world alight with power, is a really good work horse.

This is an interesting question and one that is personal to how you mostly want to use your bike.

I know what I would like to see in a bike specification wise. For the purposes I mostly use a motorbike it is a bike of around 800cc, under 210kgs in weight, 21 inch front wheel, 17 or 18 inch rear, with good ergonomics for two up riding, around 90 – 100 horse power with a 300 mile (450-480km) range. The suspension would need to handle the load reliably and the bike must have switchable ABS/traction control.

I have not ridden in many different countries, just New Zealand, Australia and a fist full of European countries. The Alps through France, Italy, Switzerland and Austria are fabulous and I would really like to go back there and ride all those high passes. 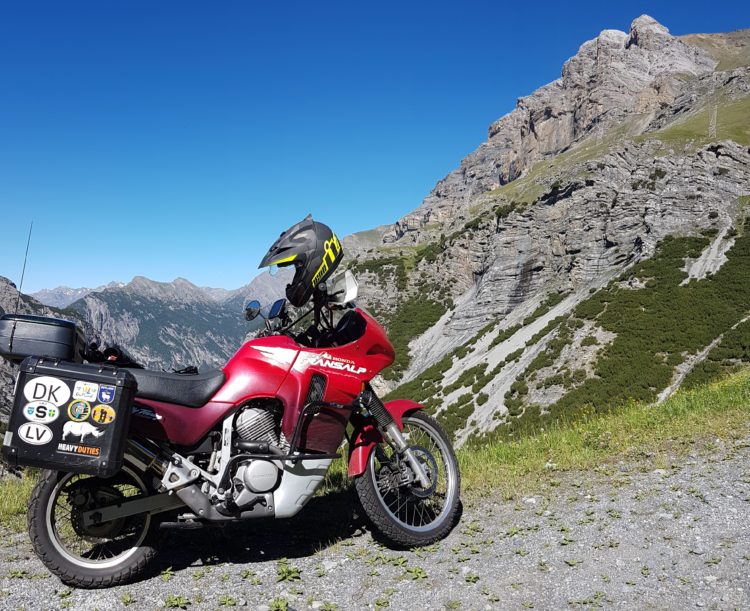 Ever since I started riding motorbikes I wanted to ride Stelvio Pass. I had the chance to do that in 2017 and I was smitten, even though the route was heavily congested, especially with those crazy cyclists. It was my number one bucket list item and I was very pleased to have finally ticked it off. 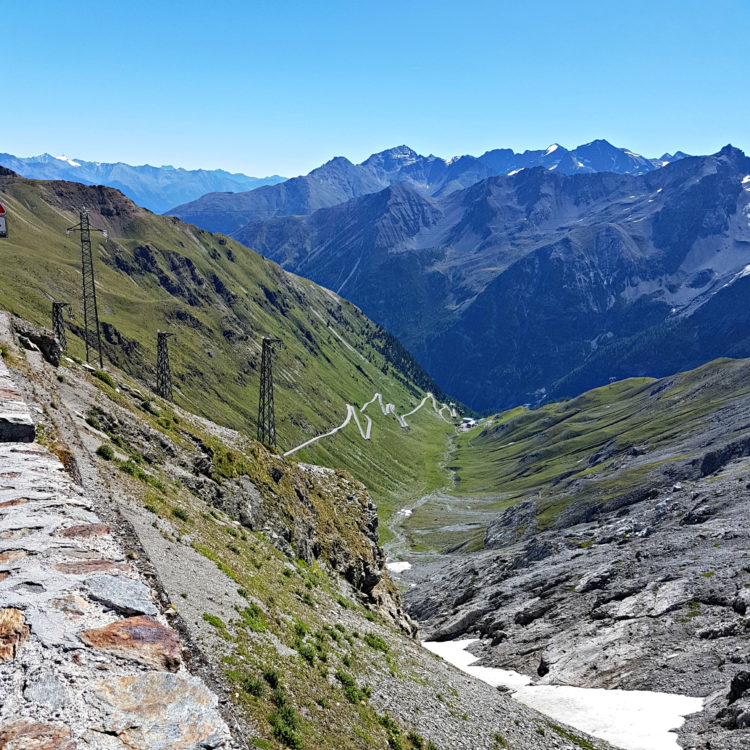 This is easy. The USA. I have been google earthing the USA for years. There is so much interesting country there I want to ride, the main areas being parts of California, Oregon, Idaho, Montana, Utah and Nevada. The aim is to ride the back roads, not the highways and to avoid big urban centres.

Riding in Russia. And not just the crazy lunatic car drivers! On leaving Saint Petersburg we aimed to head the border with Estonia. Somehow, we managed to come to the entrance of a military area only we did not know that at the time.

We stopped at the checkpoint thinking it was just a checkpoint. We spoke no Russian and they no English and we didn’t understand that we needed to turn around. We waited for what we thought was a clearance check, but the head guard, armed to the hilt with a very effective looking automatic rifle, became agitated.

His patience seemed to be quickly running out. Finally, one of the guards spoke the words ‘military base’ in German which my Dutch riding friends finally understood. As quick as we could we turned around and high tailed it out of there. We laughed about it later, much later.

The day I rode Stelvio Pass. It was fine, windless and warm. It was a long-time dream realised and even now I rehearse that ride in my head. Fond memories linger on. 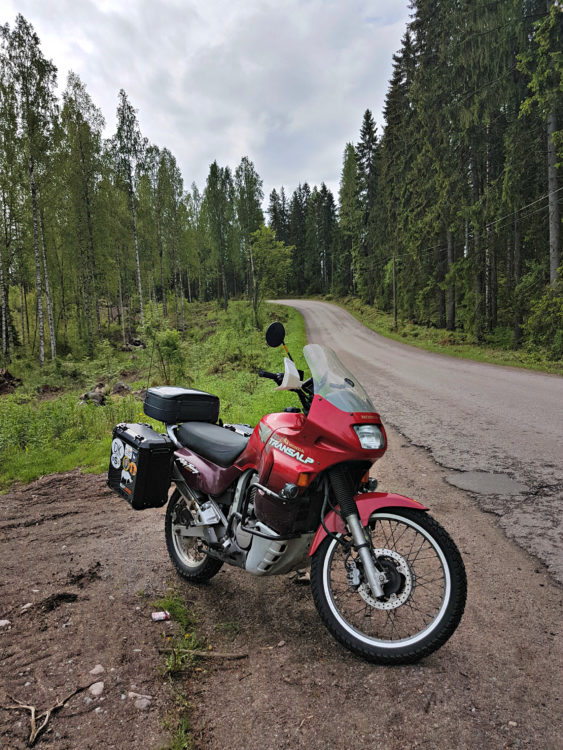 I own a couple of companies. Once invests in rental properties, which I am in the process of gradually winding up.

The other is a consultancy company where I undertake work for NZ new vehicle distributors (cars, trucks and motorbikes) providing monthly data reports and lobbying government for sensible business rules (the perennial bang your head against a brick wall exercise).

I could probably say more about what, in my view, it is not than what it is.

To me, it is riding to new places that takes you out of your comfort zone. Adventure implies new frontiers and new experiences that challenge you.

In an adventure riding context to me, that also means away from the rat race or going to places where you don’t speak the language and the culture is foreign to you. It is more than going for a long ride or doing time trials, the iron butt or anything like that. 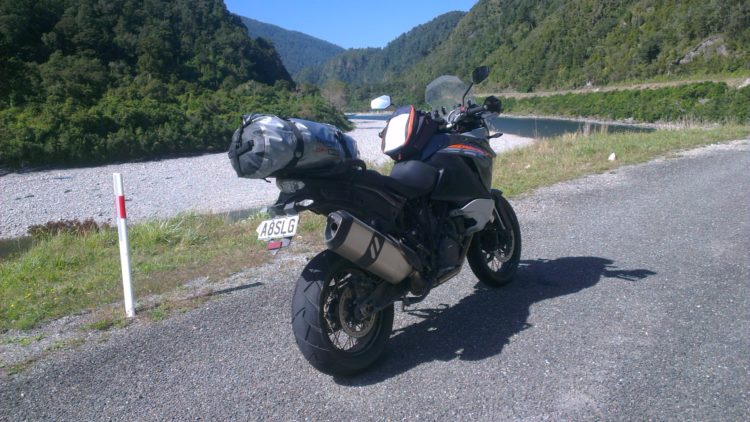 I’m not a photographer so my photos are for memories with the vast majority taken in a cell phone. And like most who have done this interview with you find one photo is just too hard. I have three.

The first is a picture of my workhorse, this one just captures the mood of riding, gear and fun’. 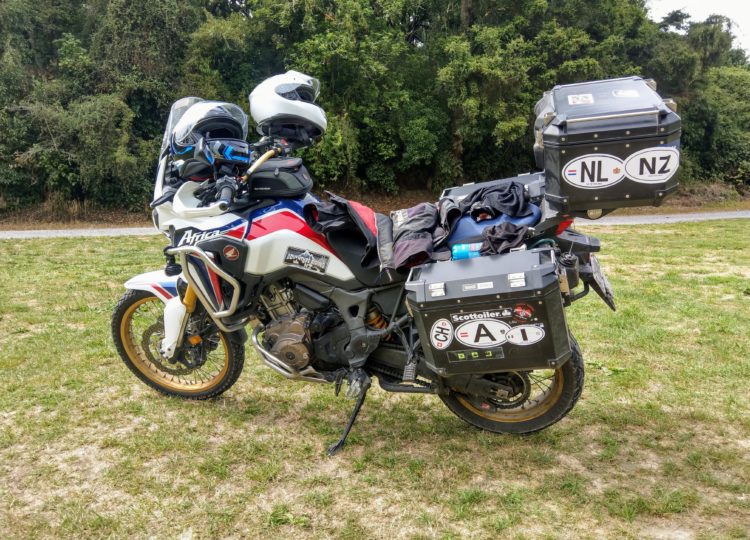 This pictures is taken in the Stelvio Pass environs and reminds me of the fabulous days riding I had.

Finally, on Gotland Island in the Baltic Sea riding with friends from Europe, the sheer joy of being as far away from NZ as I can get, on a bike in a remote location, out of cell phone range riding on rough stuff. I was having a blast. This is probably my all time favourite photo. 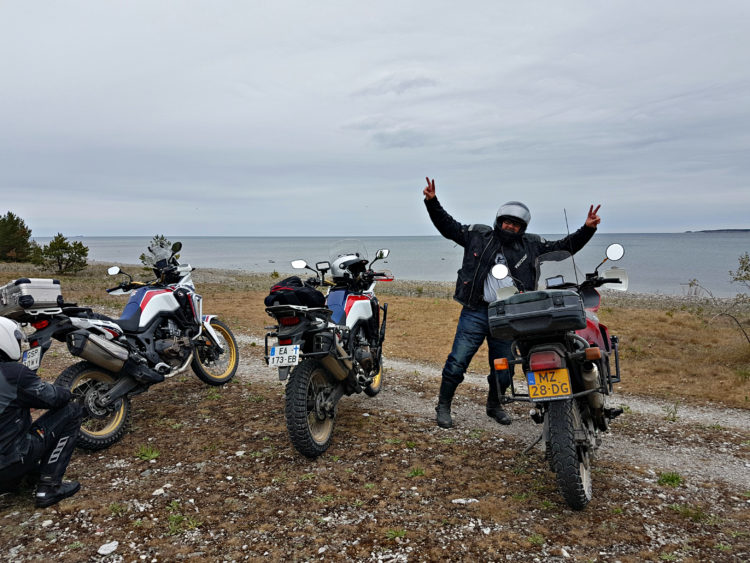