Today was a nice, uneventful ride from Krasnoyarsk to Kemerovo.

Entering one of the small towns along the way I met some military personnel.

Apparently, in Russia,  the 28th of May is “Day of the Border Troops”.  When you think about it, for superpowers (of which I still consider Russia part of that rather small club) border troops are one of the most active branches of service.

The guy on the right in the picture below was a hilarious.  I have no idea how he kept that massive hat attached to the back of his head but it certainly defined him. 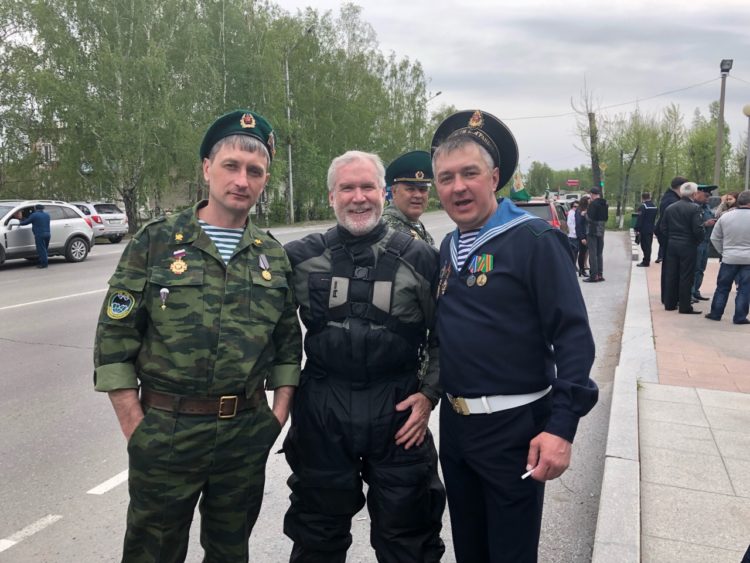 Without any spoken English, using gestures and a bit of google translate, we managed an easy conversation. All the easier since at 11am this Tuesday morning my new friend and soldier was feeling no pain. The clean smell of Vodka drifting off his breath told me why.  From what I could gather the man left in the picture was an active Border Guard and had served as a paratrooper in a foreign war. Where and when was unclear.  He never spoke or even attempted to communicate – he just smoked.  The man right in the picture (on my left) did all the interacting describing  his colleagues heroism through big hand gestures and guttural sounding Russian words punctuated with little bursts of spit.  Next, he really had fun with the fact that an American could just drive up on a Tuesday morning and join their military celebration.  We agreed that the USA and Russia should never go to war!  That would be bad.  Rather abruptly, their boss (that soldier captured in the background between our heads), hauled them back to the main square for more ceremonies. I climbed onto the steel mule and rode on.

A few hours later, arriving at Kemerovo, the manager for my “booked earlier that day” apartment was typical of the Russian’s I meet.  A working Dad with a young son.  He was very curious as to why an American would be in the middle of Siberia  riding a motorcycle solo home to California.  Through google translate and hand signals I convinced him that if I didn’t do it now – then when would I?  Well, he thought that was pretty cool.  He also liked the fact that my handlebar mounted iPhone showed Spotify playing Hendrix , “All Along the Watchtower”, over Bluetooth to my helmet.  It seems some of life’s pleasures transcend age, language and borders .  The only thing his son wanted to do was climb up on the bike and twist the throttle – so for sure that’s what he did. 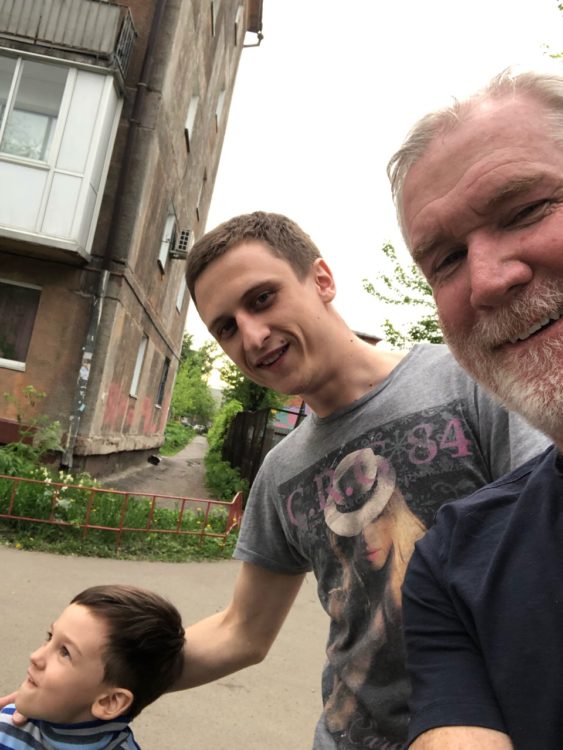 I use Booking.com almost exclusively in Russia. Here I found a clean basic setup with living-room, kitchen, bathroom and bedroom for roughly 20USD per night.  Having the kitchen was great because after a day of riding I made an outing of going to the local grocery store, buying some meat, vegetables, and a desert and cooking it up in the flat.  I carry spices, oils, vinegar, honey, and coffee.  Add fresh stuff daily and you can stay well nourished.