Time to dream a little. There is a lot of bad stuff coming down the pike at the moment, so let’s just pretend for a minute that everything is good again, and we can go out and ride without restriction. Here’s something not to miss…

Born in 1942, ‘Mimo’ Agostini began racing incognito because he was afraid of his wealthy father’s reaction. That phase didn’t last long because success made it impossible for him to keep his activities secret. After becoming Italian national motorcycle champion in 1963, he made his GP debut for Morini in 1964 before moving to MV Agusta a year later.

He not only holds the record for the largest number of motorcycle Grand Prix victories – 123 – but also won 15 World Championships titles, 18 Italian Championships titles and 10 Tourist Trophies for a total of 311 victorious races from the early 1960s to the late ‘70s. Most of this time was spent under the MV Agusta colours, although he also managed a series of teams for Yamaha. 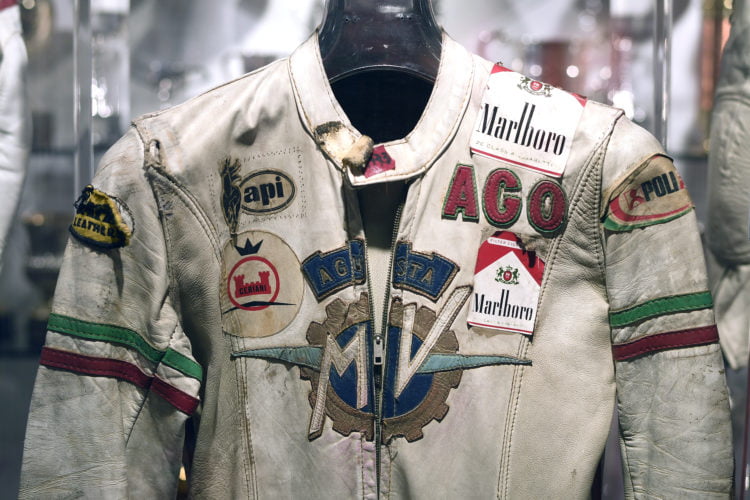 It doesn’t get any more real than this.

I can also say from personal experience that Giacomo Agostini is a thoroughly nice person, having met him a few times at social events in Italy.

Celebrating his unrivalled sporting career, his unprecedented heritage now has a museum to preserve it and share it with MV Agusta enthusiasts and motorcycling fans from all over the world. It is in medieval Bergamo, Giacomo Agostini’s hometown, nestled between the Po plain and the Alps, a stone’s throw from Milan. 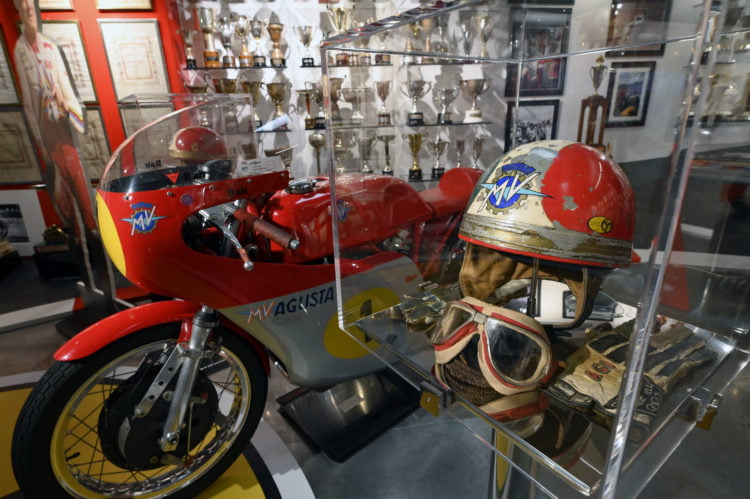 The life story of a motorcycle great is told within these walls.

The museum was designed as a private trophy room by architect Michele Giavarini for the champion to keep his more than 350 trophies and other memorabilia, with the idea of also opening it to the public. The museum holds some of the historic bikes used by Agostini, as well as helmets, race suits and personal objects, displayed in chronological order. The inox-concrete floor features a giant black on yellow #1, the number Agostini raced under, and the word “Ago”, his nom de guerre painted in bright red,  to remind everyone that Giacomo Agostini’s record number of victories and championships titles is still unequalled.

At the opening, Giacomo Agostini commented: “The history of my life is all there in this one room, and being able to spend some time there alone with my thoughts, going back to those extraordinary memories, fills me with joy.” 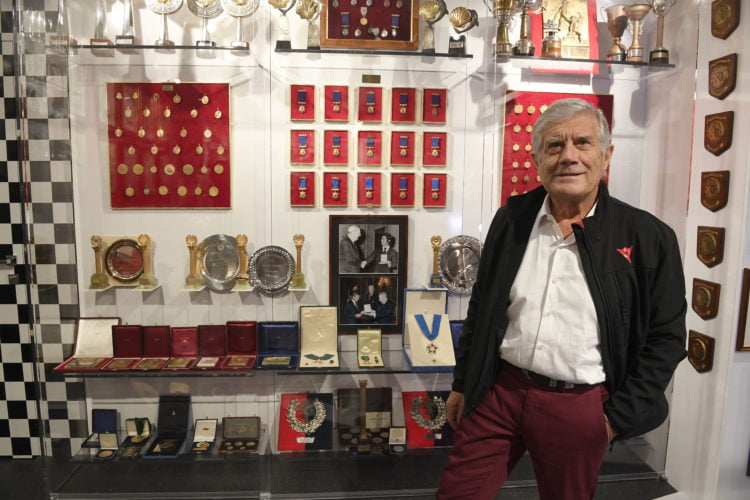 All you need to do is get seven friends together and book your evening with the great man.

Timur Sardarov, CEO MV Agusta, said: “The partnership between our brand and Giacomo Agostini is part of the glorious history of this company, and we are glad that a man who contributed so much to the legend of MV Agusta is now being rightly celebrated with this museum.”

But it gets even better! Although the museum is private, it can be visited by groups (8 people minimum) upon reservation through Villa Vittoria Charme and Relax luxury bed & breakfast, managed by Ago’s daughter Vittoria. It offers a complete package including one night’s accommodation, a visit to the museum — and dinner with the champion.

The Coronavirus has changed everything for northern Italy, unfortunately. I was going to suggest you get in quickly or the place would be booked out for the foreseeable future, but I’m not so sure now. If you think you can predict when things will be back to near-normal, call +39.035.239209 or see info@villavittoriabergamo.it