That means if you want a one-piece suit for long-distance riding, you’re probably going to end up with a textile suit. Andy Goldfine pretty much invented the one-piece riding suit when he founded Aerostich in the 1980s, and several other makers are in the market now. So, what are they all about?

The Teiz Motorsports Air Shell is made to keep you cool, despite the reputation one-piece suits have for being stuffy.

Why pick a one-piece textile suit?

Why not use a one-piece textile suit??

What are your options?

A few companies have dropped their one-piece suit lines in recent years, but there are still several options on the market. Here are a few of the prominent manufacturers:

Aerostich Aerostich basically pioneered this market, and is still the top player in the game, at least in North America. Aerostich currently sells four one-piece suits: the R3, the R3 Light, the Roadcrafter and the Cousin Jeremy, which is made of waxed cotton. Otherwise, all of Aerostich’s suits are made from Gore-Tex nylon fabric, with waterproof zippers, lots of strategically-located pockets, and they come with many, many options for customization. You can get several off-the-rack options for fit, including women’s sizes, along with different optional pockets. While most people order Aerostich suits over the phone or from their catalog or website, the company also occasionally runs pop-up retail events in cities across the USA. 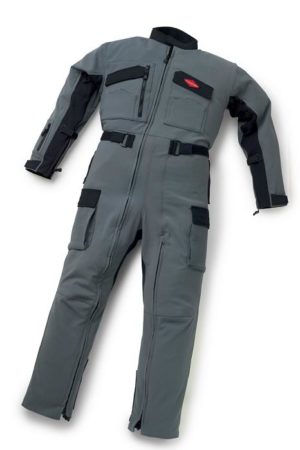 The Motoport Ultra Tek suit, like most one-piece suits, is not particularly stylish, but it will do a good job of fending off road rash.

Klim Klim has just introduced a one-piece touring suit, the Hardanger. It’s expensive ($1,299 US) and doesn’t have the same options for customization as the hand-made suits here, but it’s definitely easier to get one from an online retailer and send it back if you don’t like it, or even try one on at a local dealership.

BMW It’s rare to see a CoverAll suit in the wild, and they may not be in production anymore; it’s hard to find anyone who knows anything about them. They are still listed as available through some catalogs, though. They’re a little light on features when compared to the competition, and venting isn’t great. It’s more of a rain suit than a protective suit.

Joe Rocket Joe Rocket is best known for flashy street bike gear, but does have a one-piece in the lineup, the Survivor suit. It might be the most affordable one-piece on the market, at $399 US. It’s supposed to be waterproof. While the suit itself is supposed to be very adjustable for comfort, it isn’t available in as many different sizing configurations as others. It comes with an insulated full liner.

Teiz The founders of Teiz (pronounced “Taze”) sold their motorcycles to start a motorcycle gear company in 2008. They gather components from all over the world and have the suits assembled in Pakistan. Their emphasis is on quality and customer service; you can buy off-the-rack gear from them, or custom-fit. Check out their lineup of one-piece suits at their website (they have other gear as well).

Motoport Motoport gear isn’t common, but it’s some of the best on the market, with lots of attention to detail and careful selection of materials. It’s also very expensive; the Ultra Tek Stretch Suit sells for $1,529 US, and that’s before ordering custom sizing or other features. However, the company’s specialty is making gear for motorcycle patrolmen, so you know it’s going to be high quality and comfortable.