We recently told you about Harley-Davidson’s (Harley) major change in business strategy.  It comes after years of lagging sales that have caused Harley’s stock to plummet.  The heavyweight cruiser manufacturer’s stock has lost more than 60 percent in the last 3 years.  But Indian motorcycles is bucking that trend.

Some could argue that Harley’s latest 1st quarter difficulties were caused by the COVID-19 pandemic and that all manufacturers have experienced similar declines.

While that might be true for most manufacturers, there is one that bucked that trend.  And, it’s perhaps the most direct competitor to Harley-Davidson.  That manufacturer is Polaris’ Indian Motorcycle.

With respect to motorcycle manufacturers and their 2020 Q1 financial reports, the stories couldn’t be more different.  It’s a story of the haves and the have nots.  So let’s take a look at the two companies and try to figure out why they may be so different.

Harley-Davidson (Harley) is America’s biggest motorcycle manufacturer by a large margin.  Harley sold 125,960 bikes in the US and 218, 273 motos worldwide, during 2019.   With those kinds of numbers, it’s clear that Harley is much, much larger than Indian.

It’s difficult to make a direct comparison when it comes to motorcycle sales because Indian’s financials do not identify the number of machines sold.  But its 2019 total motorcycle revenue was a “mere” $119M against Harley’s $4.6B in motorcycle and product revenue.

Now that we have an idea of the magnitude of difference in size between Harley and Indian, and their 2019 revenues, let’s take a look at how the two brands did in the first quarter of 2020.

Indian says its Challenger and FTR models are selling well.

Harley posted another losing quarter some of which they blamed on the impact of COVID-19, and perhaps rightly so.  But with 4 straight years of declining sales, one might argue that the pandemic only contributed to the continuing loss.  It was not the reason for Harley’s worldwide 8% decrease in revenue or a 6.8% decrease in motorcycle-only revenue.

Indian’s financial story is quite different.  After posting a 37% year over year increase in 2019, the picture continues to look rosy for Indian.  In the first quarter of 2020, Indian posted $126M in sales of a 7% increase when including the Slingshot 3 wheeler.  Indian points out in its SEC filing that North American industry retail sales, 900cc and above cruiser, touring, and standard market segments (including Slingshot), decreased mid-teens percent.

So why is it that Indian continues to increase sales when Harley’s sales for the last four years have decreased?  There are so many variables that affect sales of motorcycles that its nearly impossible to point a finger at a single one.

To be fair, since Indian’s volume is so much smaller than Harley’s, it’s easier to impact its percentage of sales upwardly with fewer sales.  That said, the key point is that Indian’s numbers are headed upward for the second straight year.  That’s significantly different from what Harley has experienced for four years straight.

Something is going on at Indian that is driving its positive results.  What could those things be?

Indian says that its sales of its new FTR and Challenger models have been very successful.  Both are new models for the company and perhaps that new model selection is a driving force.  Also, the FTR represents a departure from the mostly cruiser lineup of Harley.  Unfortunately, we can’t say for certain since Indian does not publish the number of bikes sold. 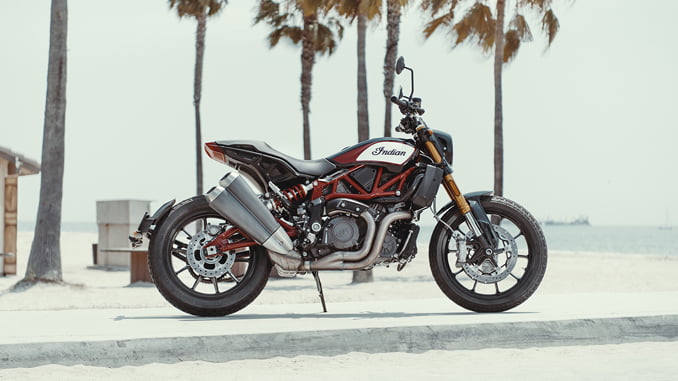 The FTR is Indian’s flat-track inspired machine which is selling well.

In performing an analysis, one must acknowledge the impact of COVID-19 on first-quarter sales.  We must also acknowledge the fact that the motorcycle industry, on the whole, has been in the doldrums of late.  The USA is not the only moto market that’s on tough times.  Around the world, many regional markets are being negatively impacted.

There are some sales bright spots, however.  BMW and KTM are prime examples.  Both manufacturers posted overall gains in 2019.  There are others, but comparing them to Harley may not be an apples to apples comparison.  On the other hand, Indian is likely Harley’s closest competitor in terms of heavyweight “cruiser” motorcycles.

So what is it about Indian that lets it continue to increase its sales while Harley and other moto manufacturers can’t seem to do?  Is it their management, product lineup,  or something else that is the driving force in Indian’s upward momentum?  Let us know what you think in the comments below.