One non-profit organization says they don’t. The National Motorists Association (NMA) claims that not only are the devices ineffective, but they also claim that accidents increase at intersections where the camera are installed.

If their claims are true, some may ask whether the cities or towns do it in the name of safety. Have the cameras been installed to simply increase town/city revenues? The NMA claims that red light traffic cameras are installed by for-profit companies. They claim this “virtually guarantees” the focus is profit, not safety. Therefore profits, not safety, are the real motives of the companies.

The NMA opposes their use because of these shortfalls. In 2018, NMA sent a message to Milwaukee, Wisconsin “officials” opposing the cameras. Their message cited 10 reasons the cameras should not be used/installed.

Some of the objections are politically based so we won’t list them all here. If you want to see all 10, you can go to NMA’s blog and read them there. Here are a few of NMA’s claims:

NMA says it doesn’t happen at all intersections, but claim red light cameras often increase total crash rates at camera intersections. They go on to say that higher crash rates cannot be considered an acceptable result of any safety program. They say that unbiased sources of data and analysis are always the best. Data from any group in the revenue stream should not be trusted.

To back up its claims, the NMA cites a 2017 Florida state-wide report showing that crashes go up at red light camera intersections. They also cite a Tampa, FL city-wide audit which indicated at that 19 of the 22 intersections where red light cameras we installed had more accidents, resulting in a more than 30 percent increase in crashes.

Here, NMA claims that most cities with red-light cameras also use them to fine safe drivers making a slow rolling right on red turns. To back up their claim, they cite a federal research report by the National Highway Traffic Safety Administration (NHTSA). NMA claims the report concluded only 0.06 percent of crashes with injuries or fatalities were caused by slow rolling right turns at red light camera-equipped intersections. 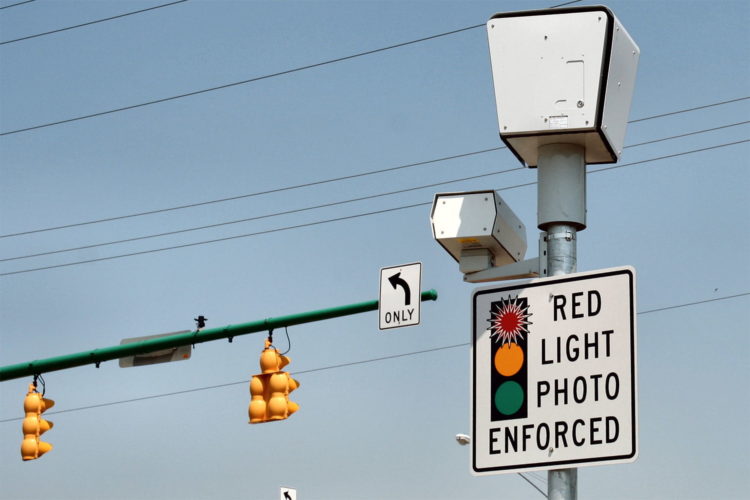 NMA says that there is a disconnect between the for-profit camera companies’ sales presentation videos. They claim that the sales videos show crashes and videos from red light violations that occurred often 5 to 9 seconds after the light had been red.

In addition, NMA claims that the drivers in those videos never recognized the light was red due to factors such as distracted driving, intoxication (alcohol and/or drugs), medical impairment, or fatigue. Therefore, NMA concludes that the existence of a red light camera would not have any effect on the number of crashes because the drivers in these cases didn’t even see the red light.

A clear and convincing picture?

After initially reading this data, I was somewhat convinced that red light camera enforcement just doesn’t work. But as I thought more about it, I wondered if the data and conclusions were entirely accurate.

As I thought a little more carefully about it, some things seemed not so conclusive. NMA stated its objections based on changing standards. When they made a point about crashes at red light equipped intersections, they specifically stated that the “total” accident rate increased. What they left out though was the fact that injury/fatal accidents decreased. Later, they stated that injury/fatal slow rolling right turn crashes were low. But they didn’t say what the effect of the cameras was for total accidents.

It appears that some of their cited amounts are off. Going through the actual reports, the percentages are a bit different. Not excessively, but enough to make one wonder whether they read the entire report or change the percentages to better support their position.

NMA also claimed that the “vast majority” of red light violations were given for infractions of less than one second. As a result, they say that “safe” drivers were inappropriately charged with a red light violation. Unfortunately, NMA did not provide the basis of their conclusion so it is difficult to determine whether NMA’s claim is supported by some sort of data.

NMA asserts that the camera companies’ videos show crashes  5-9 seconds after the light changed.  They also complain that violations were sent to drivers who violated the red light by less than one second.  So if one second is too short and 5 seconds is too long, then their claim is that only persons who have violations more than one second but less than 5 seconds would be appropriately charged with a violation? Does that make sense?

Frankly, I don’t think I can make a decision based on the data provided by NMA. It does make me wonder about red light cameras. Unfortunately, it doesn’t give me enough proof to believe that red light cameras are actually a hazard to traffic safety or simply a revenue-generating tool.

So we’d like to ask you. What you think about red-light cameras? Do you think they are a good tool to help promote safety? Are they just a tool that cities/towns use to generate revenue? Is it be a bit of both whereby safety is enhanced and revenue is generated?

Tell us what you think in the comment section.