The Ducati 916 has got to be one of the most iconic models in the history of sportbikes.  It had bleeding edge design and performance to match.

Designed by world-famous Italian designer Massimo Tamburini, the 916 was a bike that nearly every sportbike fanatic wanted, but few could afford.  It handled well, had lots of power and was light for its displacement and size.  Ducati dominated the World Superbike Series for years using variants of 916. 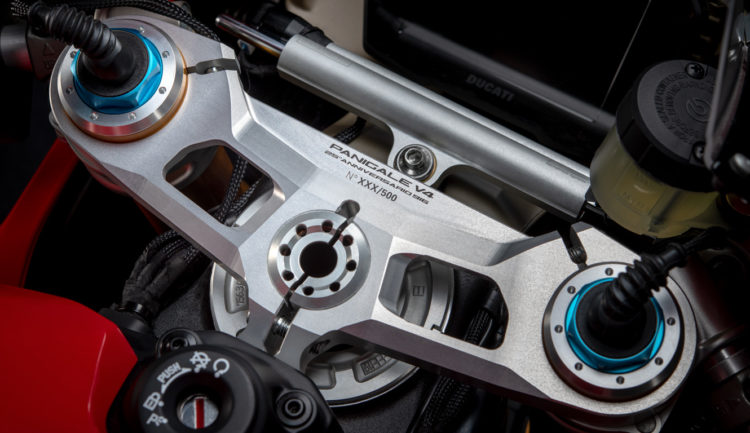 A teaser photo of the headstock of the new Ducati Panigale V4 25° Anniversario. Photo credit: Ducati.

If you can believe it, it has been 25 years since the 916 first entered production.  To celebrate, Ducati had decided to release a limited edition Panigale V4.  Ducati has named the new machine, the Panigale V4 25° Anniversario 916.  The new bike has a limited production run of 500 units and will have “original livery and exclusive racing components”.

The Italian manufacturer will unveil the new Panigale on July 12, 2019, at Pebble Beach, California, at 8:00 PM.  The bike will also be shown at the World Superbike Round to be held at Laguna Seca the same weekend.  In attendance will be former 4 times World Superbike Champion Carl Fogarty.

Ducati has also announced that Aruba.it team riders Alvaro Bautista and Chaz Davies will take to the track with a special livery inspired by the graphics of the Panigale V4 25° Anniversario 916.

More pictures of the Panigale V4 25° Anniversario 916 will be available on July 12th and 13th.

Zero Teases The Release Of Its New SR/S Model