Partway through the presentation, Domenicali talked about Ducati’s stying/design team and quickly spoke about 2 concept machines.  He first mentioned a Scrambler based motard.  It uses the current Scrambler’s 803cc engine.

Then Domenicali quickly moved on to the second concept machine.  This one is called the Desert X and it utilizes the Scrambler’s 1100cc engine.

The Ducati CEO said that the Desert X is a remembrance of the Cagiva Elefant that won the Dakar Rally in 1990 and 1994 with 4 times Dakar winner Edi Orioli aboard.

Both concept models appeared as sketches.  But shortly after announcing the two machines, Domenicali made an even more significant announcement.  Both concept machines will appear in the flesh at this year’s EICMA.

That statement says that the designs are more than a concept; they are now prototypes.  That’s a big step towards producibility so one has to wonder how far Ducati has already taken these two designs. 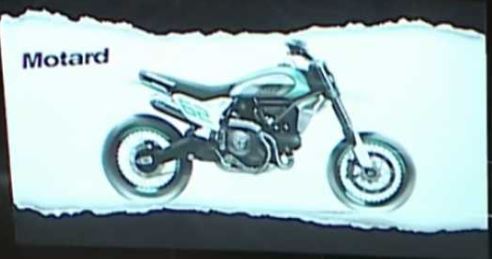 Both machines are interesting concepts.  More so, the Desert X could be very a very intriguing option for the ADV community.  A Scrambler based machine could be significantly smaller and lighter than Ducati’s current ADV oriented Multistrada Enduro.

I wonder if Ducati would consider not putting the larger engine into the Desert X to keep weight down.  With the success of the newer middleweight ADV bikes like the KTM 790, do people really want another big-engined ADV bike?

If you missed the Ducati World Premiere 2020 and want to see Domenicali’s comments about the two bikes, check out the video below.  Domenicali talks about the two concept/prototype machines about 24 minutes into the presentation.

Tell us what you think!

Tell us what you think of either of Ducati’s new concept/prototype machines and let us know what changes if any you want in either of the two models in the comments below.