Editor’s note: Thanks to COVID-19, it’s hard these days to get test rides on 2020 models. Good thing this 2019-edition Ducati Scrambler Icon hasn’t been changed for 2020, then! The model for sale in showrooms right now (if you find one open) is exactly the same as this machine Zac rode a while back.

I never knew I had it so good.

When I started riding motorcycles, I was a college student on rural Prince Edward Island, Canada’s smallest (and quietest) province. There wasn’t much there for hardcore twisties, but other than that, it was a great place for relaxed riding. Get on your bike, head down a winding back road, jump on a dirt road, and you were at the beach. Swim until the sun goes down. Light a bonfire. Someone will show up with a guitar eventually, and you’ll have a memory that lasts for the rest of your life.

It’s a modern-day Instagram cliche, but that’s exactly how I spent my earlier years behind bars (motorcycle handlebars, that is). Later on, when I moved away from PEI, I realized most of the world doesn’t really have that lifestyle—but they want it. And that’s the target market for the Ducati Scrambler Icon. After riding it, I can tell you Ducati’s nailed it. 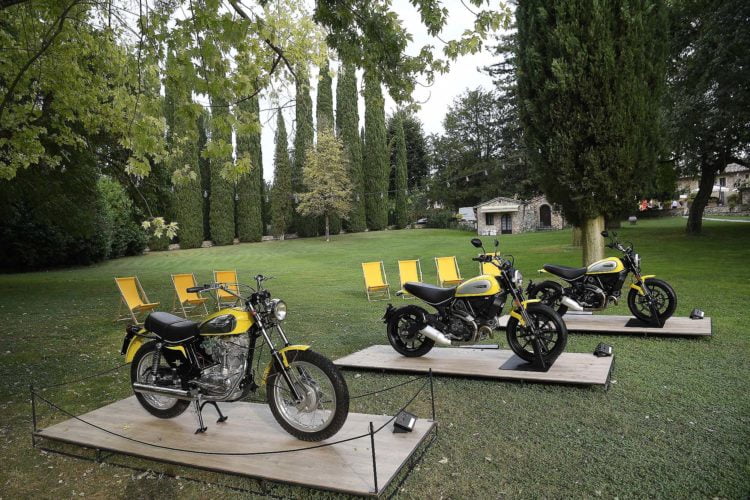 Some family history, with the original Ducati Scrambler model on the left. Photo: Ducati

The current Scrambler Icon model is updated from the Scrambler unveiled at the 2014 EICMA show, which was itself a mash-up of old ideas. Ducati’s first scrambler was a mild-mannered motorcycle with kinda-sorta dual sport pretensions, unveiled in the 1960s; the new machine took the same basic form, but modernized, and with Ducati’s long-serving air-cooled 803 cc L-twin engine. The current model, last updated for 2019, uses the same engine and looks basically the same, but has some other significant updates.

Most importantly, Ducati included leaning ABS on the updated Scrambler Icon. The gauges were updated, the seat and exhaust were re-designed, and the suspension was overhauled (maybe they should have left it alone—more on that later!). 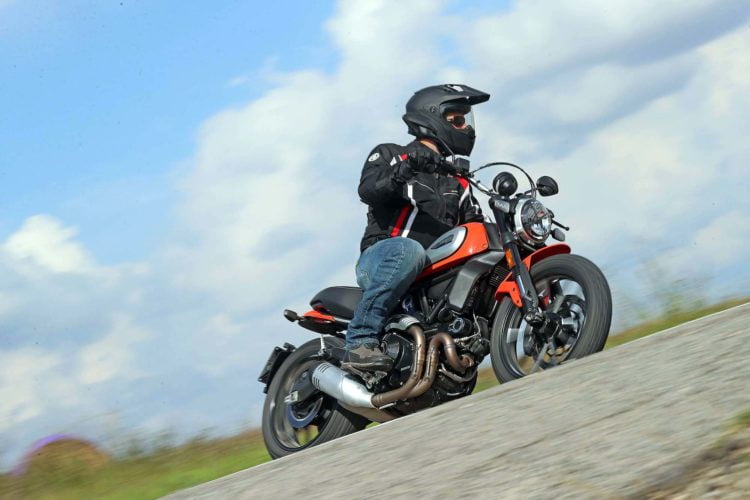 Pardon the sloppy body positioning, and look at the bike. This is the sort of back road scenario this machine is perfectly designed for. Photo: Ducati

How does it ride?

I rode this bike at its initial launch in Tuscany, on a full day of twisty back roads, with a tiny bit of gravel thrown in. The route was well-chosen to show the bike’s highlights, and there certainly was lots to like.

First off, the engine. It’s rated for 73 hp and 49 lb-ft of torque; Ducati’s V4 superbikes make almost three times the horsepower. Does that mean the Scrambler doesn’t have enough jam? Certainly not. These days, manufacturers continue to stuff more and more horsepower into bikes, then sell us expensive electronic safety gadgetry to manage it all. The Scrambler is proof you don’t need all that power. If you want to have fun, all you need is an engine matched to the roads you’re riding, and the L-twin’s broad powerband works very well on back roads. It’ll easily carry highway speeds, too, but that’s not what this bike’s primary use is.

The L-twin’s six-speed gearbox is, sadly, typical of Ducati: You’ll hit the occasional false neutral. At least the hydraulic clutch has extremely light pull, and wide ratios mean you can occasionally be a gear higher than you ought to, and the bike doesn’t mind. It really is an easy bike to ride.

The handling, as you’d expect, is mostly very good. The wide handlebar combined with the 189 kg curb weight and sensible 18-inch front wheel means it’s fun to throw around. It’s balanced well, and the low 798 mm seat helps too. There’s only a single brake disc up front, but it’s all you need on a bike like this.

I’d be curious to know how it handles with a passenger, but journos aren’t known for running around at launches, begging to jump on the backs of each others’ machines. I do think this machine is best-served for a solo ride, but if you’re the type who likes to take an occasional passenger for fun runs to the beach, you should be fine if you jack up the rear preload.

That’s the only adjustment you can make on the rear shock, and there’s no adjustment on the front forks. 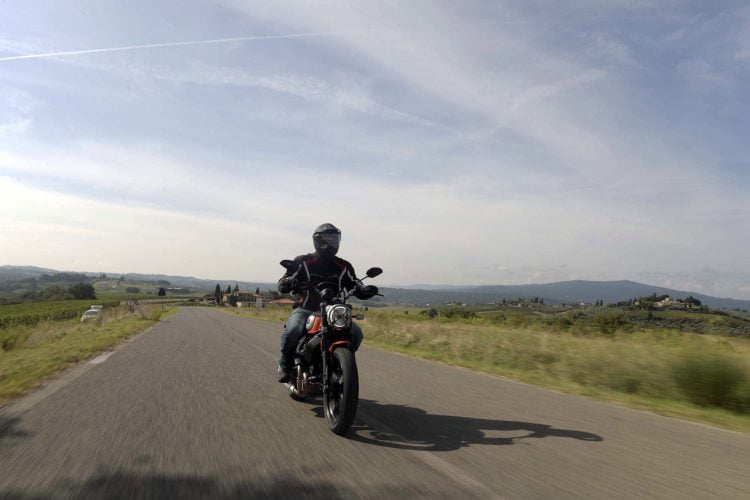 A bike built for Instagram days. It’s a fun machine. Just don’t expect GS performance out of it. Photo: Ducati

How well does it ADV?

As always, this depends on how you define ADV. If you’re the type who wants a relaxed local ride, with the occasional fire road, thrown in, this bike will be a fun choice. If you want to strap down 100 kg of luggage and blast across the continent, you won’t like this bike. And, if you’re all about that singletrack life, then no, this machine is not for you.

The cast rims will self-destruct under serious, fast offroad work. The tires are aimed at street usage. The 18-inch front turns OK, but won’t easily roll over stuff when you’re off-pavement. Due to some weird ergos between the seat, handlebars and tank, this isn’t a fun bike to ride while standing up (that, at least, can probably be fixed with new pegs, seat or handlebars). And worst of all, the suspension works OK on the street, but is crap when you hit bumps. Or at least, the bike I rode seemed to start pogoing when we hit rough sections, and it looked like other riders had the same problem. Maybe a bit of preload adjustment would help, but I wouldn’t count on it.

But not every adventure rider wants a machine that’s aimed at hardcore riding off-pavement. Some are just looking for a fun-to-ride bike that answers to the question haunting so many asphalt-only riders: “What’s down that gravel road?”. Put decent tires on the Scrambler Icon, and you can explore those dusty farm lanes, fire roads, and sandy trails to the beach, as long as you’re sensible. Add a small flyscreen and strap down a duffel bag, or maybe buy some soft saddlebags, and you’ve got a tourer that lets you enjoy the scenery along a secondary highway, instead of blitzing the superslab at warp speed.

I just wish I’d had the money to buy one in those days when I started riding on PEI.

For full details on the entire Scrambler line, visit Ducati’s sub-page for the brand. Currently, the Scrambler Icon has a $9,595 MSRP in the US, plus tax and fees, and comes in yellow or orange.