Back in the day when I was a sportbike fanatic and doing some club racing, I owned a bunch of Ducatis.  I mean a lot of them.  I was working hard, making decent money and could afford more than one bike.  So a host of Ducati’s filled my “Santuario Della Motocicletta” (motorcycle shrine) aka garage.

But none of them even came close to the performance of Ducati’s newest and very limited edition sport machine; the Ducati Superleggera V4.  We told you about it when it was just a rumor as project 1708, and now it is reality.  And, the reality is that it is a carbon fiber stiletto-heeled, wasp-waisted, razor-sharp, wickedly slippery and gigantically powerful bike. 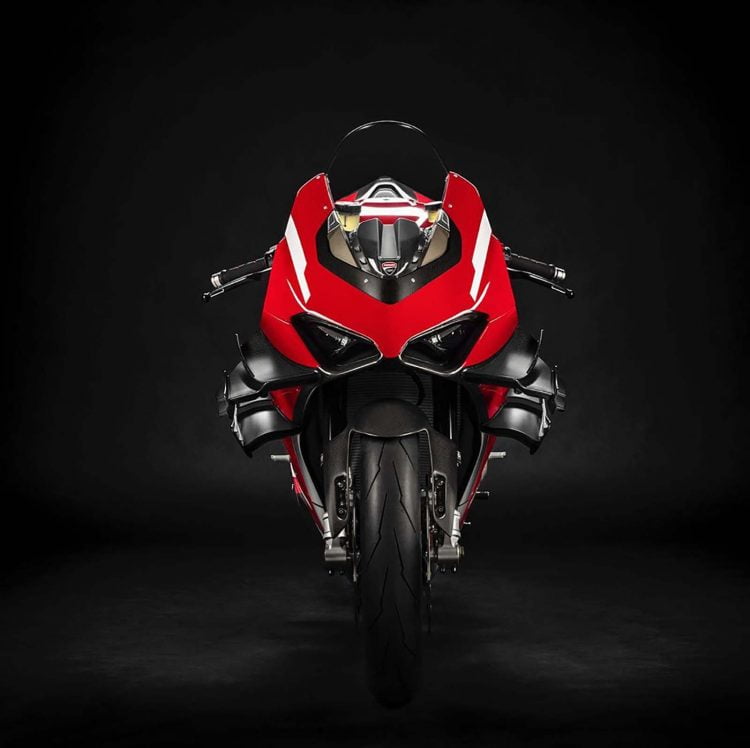 Staring into the maw of the red superbike.

With a claimed 234 HP propelling its feathery 335.5lb weight, (152.2kg)  the Superleggera V4 has a power to weight ratio of 1.42lb per horsepower.  Can you say land-based missile?  If the engine’s performance doesn’t make you smile, the machine’s components likely will.

The Superleggera V4 is the only street-legal production bike whose entire chassis is made up of exotic materials.  All that carbon fiber, titanium, magnesium, aluminum, and composite material allow Ducati to deliver the Superleggera V4with a dry weight of just 350 pounds (159kg).  If that’s just too heavy for you, you can add Ducati’s “racing kit” to lower the weight to just 335 pounds (152.2kg). 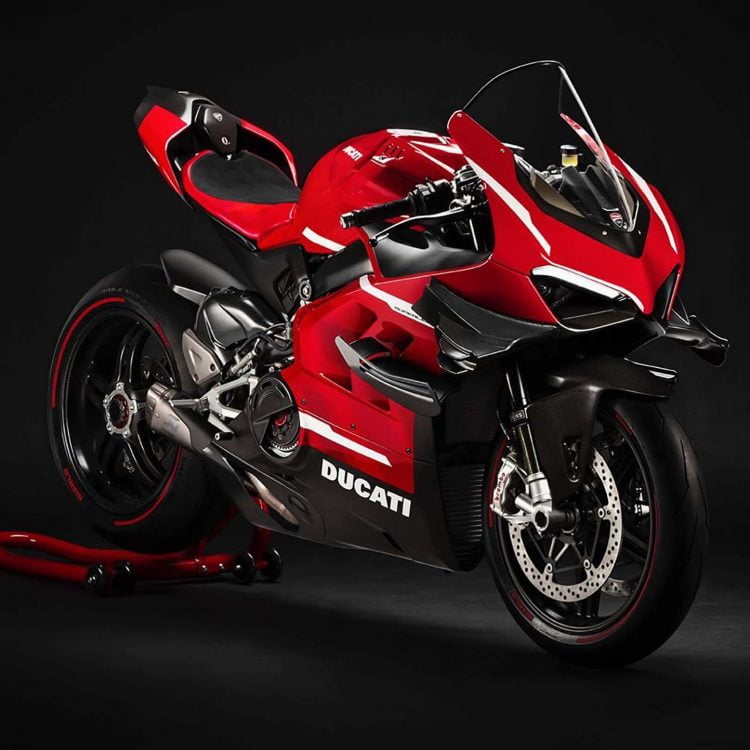 The engine inside this beast is the 998cc Desmosedici Stradale R 90º V4.  It weighs approximately 6 pounds (2.8kg) less than the 1,103cc V4.  It also features a dry clutch (rattle, rattle), an adjustable desmodromic timing system, and Akrapovic exhaust.

If you must have more, there is a racing kit.  It comes with an extra Akrapovic titanium exhaust unit, special engine settings and a RaceGP display for track use only.

Ducati says that all those exotic components required lots of aerospace testing techniques.  Tests using thermography, ultrasound, and tomography were all used in the design of the Superleggera V4. 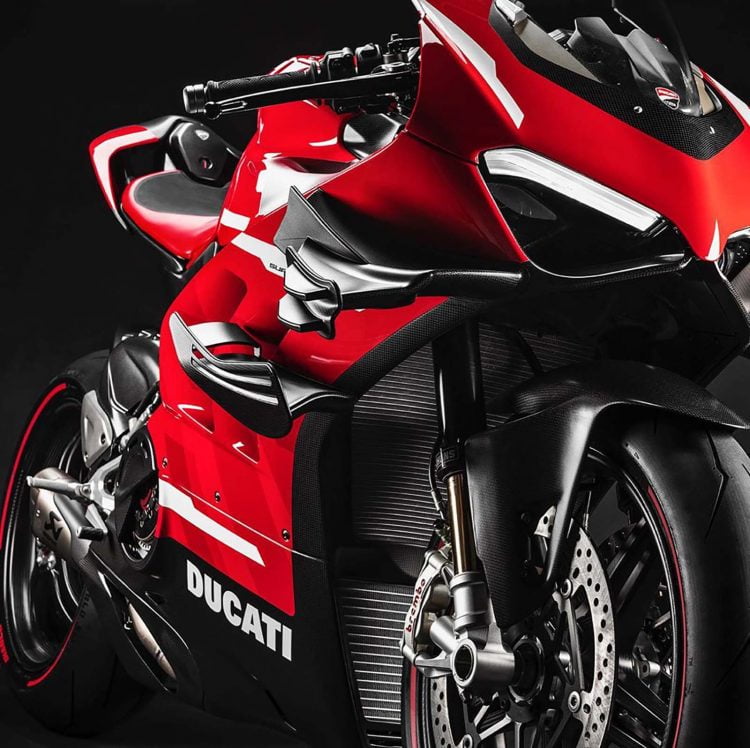 The two winglets on both sides of the bike make an incredible 110 pounds of downforce at about 165 MPH.

To ensure that the machine remains earthbound, Ducati paid close attention to aerodynamics as well.  The Superleggera V4 is as aero efficient as Ducati’s MotoGP bikes. 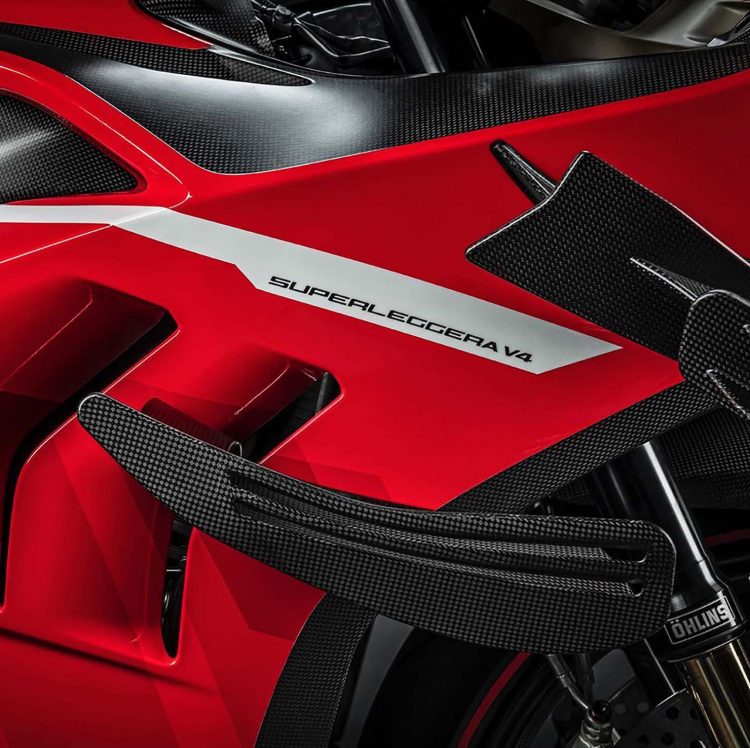 Attached to the bike’s carbon fiber fairing are two “biplane-like” aerofoils.  Working together, they create 110 pounds of downforce at about 165mph (270kph).  That’s nearly 45 pounds (20kg) more downforce than made by the 2020 Panigale V4 and Panigale V4 R.

The Superleggera V4 comes with eight riding modes.  They include Race A, Race B, Sport, and five additional programmable settings.  Its lap timer can record lap and split times for five circuits.  This is a nice feature allowing the rider can save the bike’s setup when re-visiting a track. 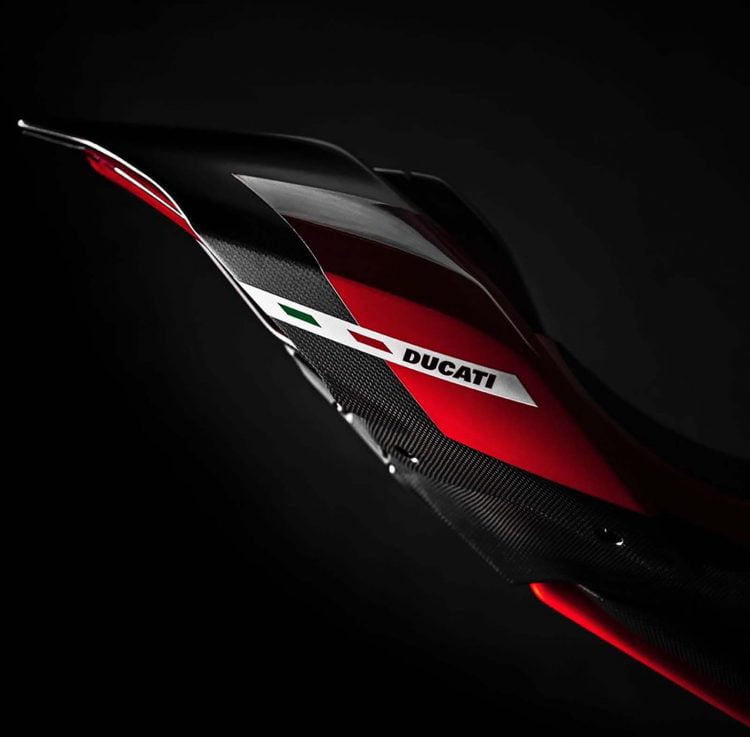 Even the Superleggera’s tail section is small and sleek.

Only 500 units will be produced and delivery will start around June 2020.  Most frighteningly, Ducati’s website does not list the machine’s MSRP.  You’ll have to leave your phone number and they will contact you.

Ultimately, the Superleggera V4’s price is likely one of those “If you have to ask you can’t afford it variety”.  Unverified reports have the bike sporting a $100,000 price tag.

But if you have the cash and are willing to spend it on a motorcycle, you’ll own one of the most powerful and quickest production bikes this planet has ever seen.