I made it to Paris today, but first, I went to Vimy Ridge. Brother Doug (the Canadian Judge who first ruled on the legality of Marijuana in Canada) recommended this spot. I knew little else about the history of this place navigating to Vimy Ridge.

I need to take a detour (metaphorically) before getting to Vimy Ridge. Two days ago, I went to Dunkirk.

In the fall of 2018, while sailing off the pacific coast with brother Gerry, he asked me if I’d seen the recent movie, Dunkirk. I hadn’t but did subsequently. Powerful stuff. You see Gerry is the real war history buff in the family. I particularly liked watching him get animated describing his readings on the battles from both WWI and WWII. So, I walked the beach at Dunkirk, I climbed the dunes and saw what I imagined the bones of sunken ships on the sandbar. This one’s for you, Gerry. 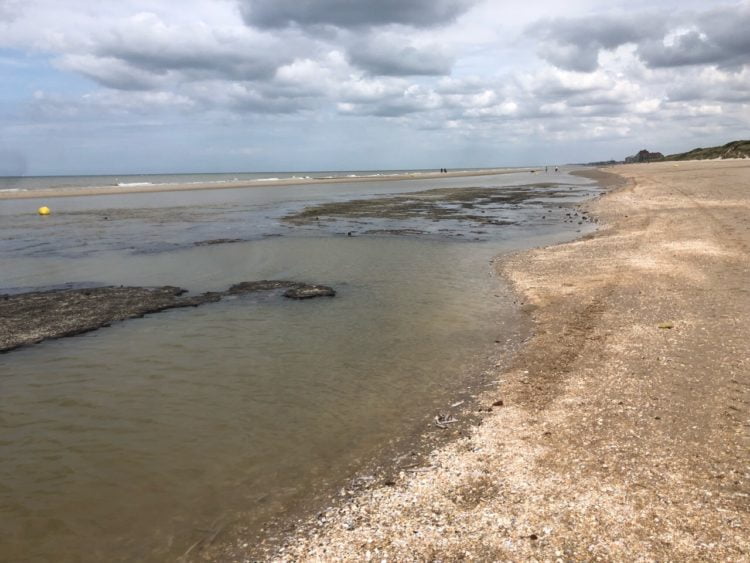 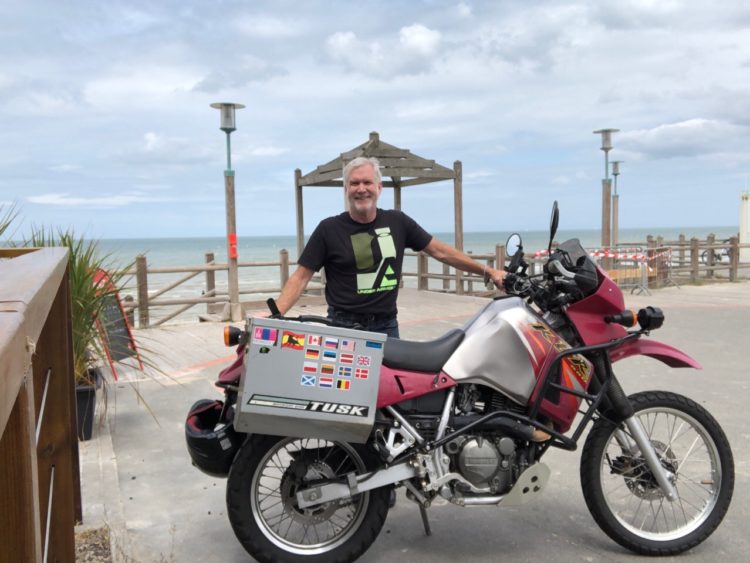 The Steel Mule Delivered  me Safely to Dunkirk 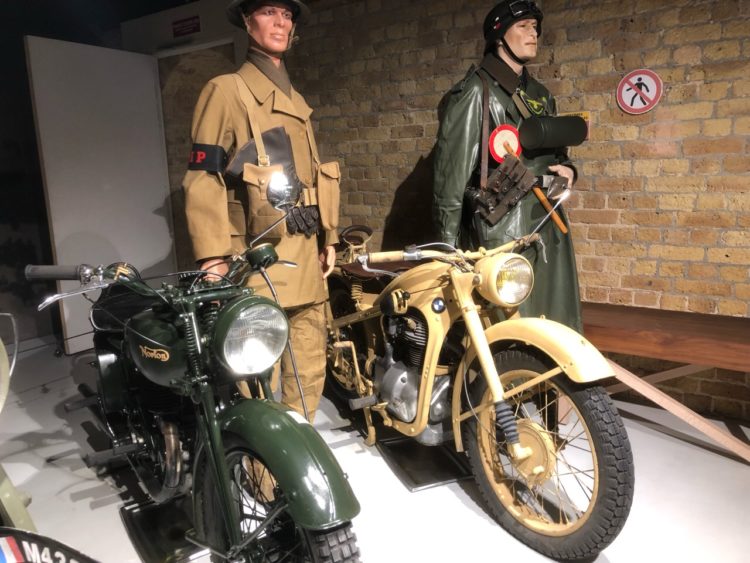 Recovered and Restored at Dunkirk 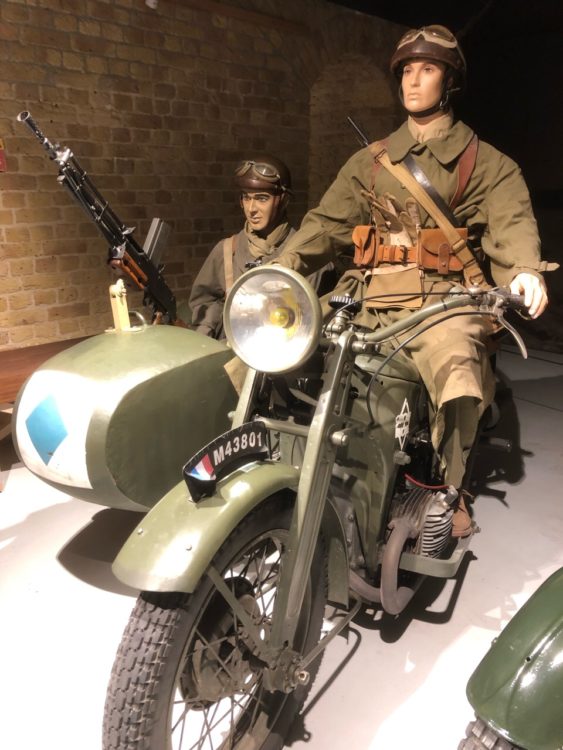 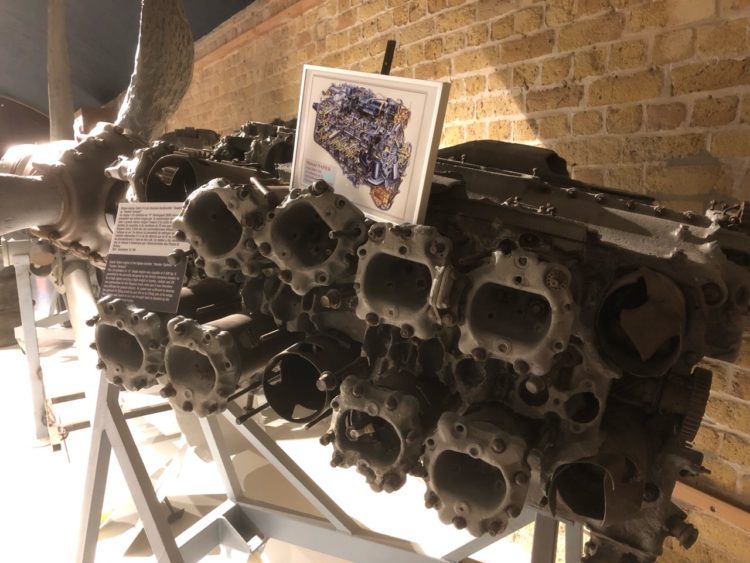 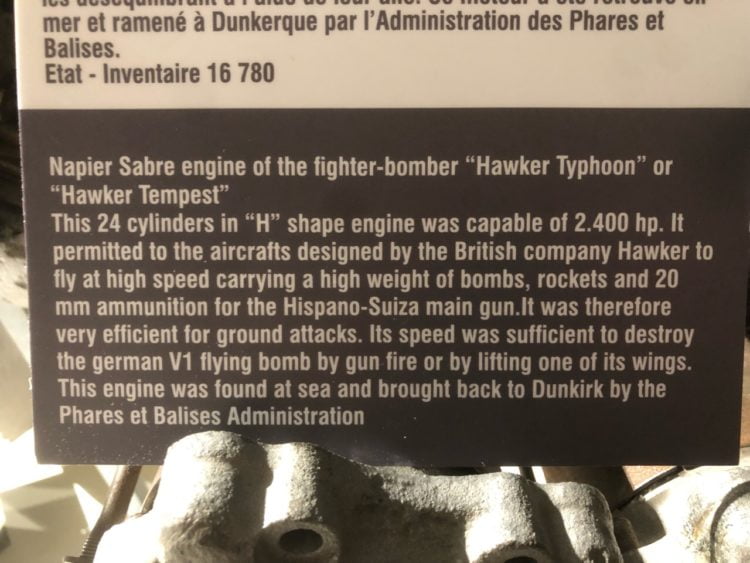 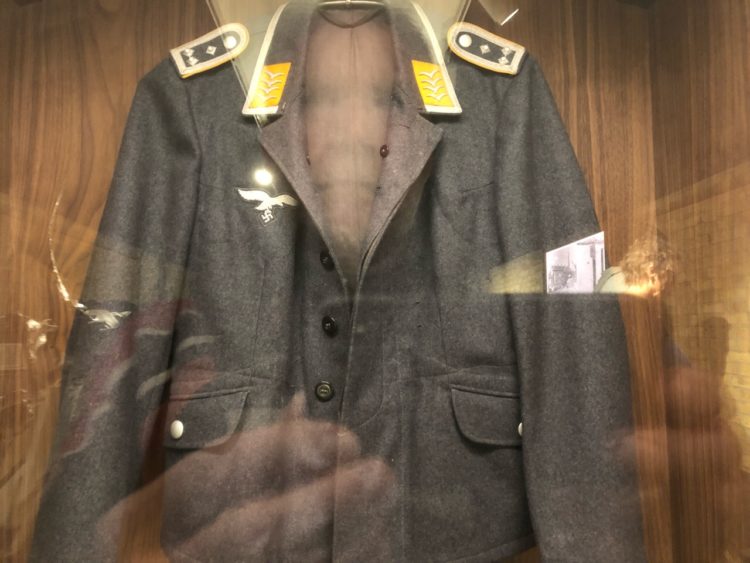 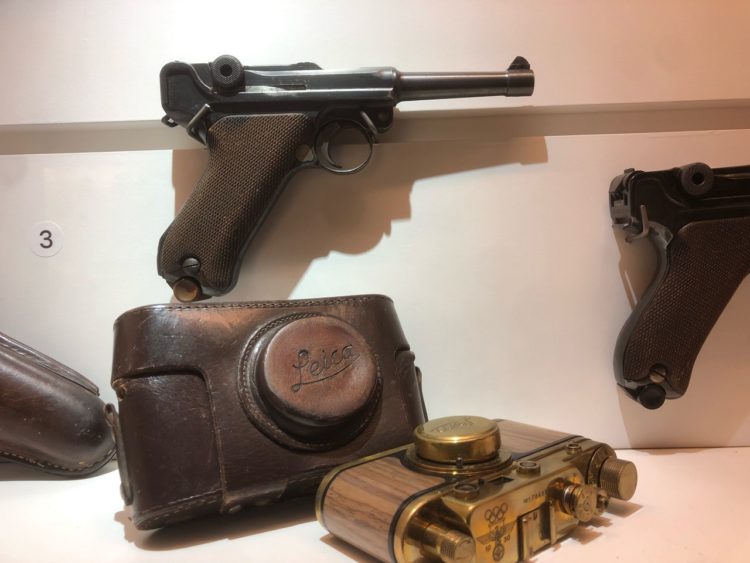 Recovered Artifacts in the Dunkirk Museum

Gerry’s sons, Mark and Robert don’t even bat an eye when they tell you that, “Dad” was the best corporate commercial lawyer in the northwest territories. Check your atlas, that’s a lot of real estate. So, to this man who taught me to sail, golf and keep my fists up in a street fight, I’m rooting for you – as Red Green says – we’re all in this together – keep your stick on the ice. That was Dunkirk.

Now to Vimy Ridge. Riding through the French countryside I started the climb and saw a commanding white monument marking the high ground. The scale was not immediately apparent as I was still several kilometers away. The road wound into pine woods – characteristic reforestation. Next a clearing and two flagpoles, one flying Le drapeau tricolore of blue white and red, the other flying my maple leaf. France and Canada side by side – this looks interesting. 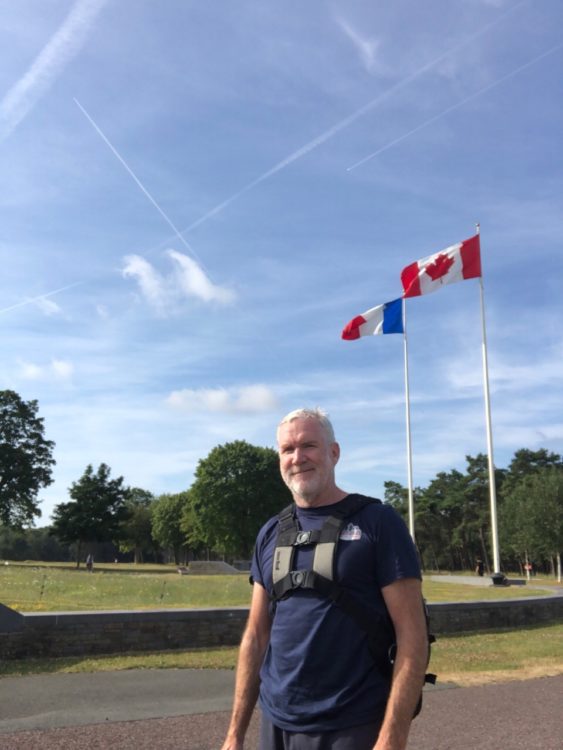 Vimy Ridge – A Slice of Canada Within France 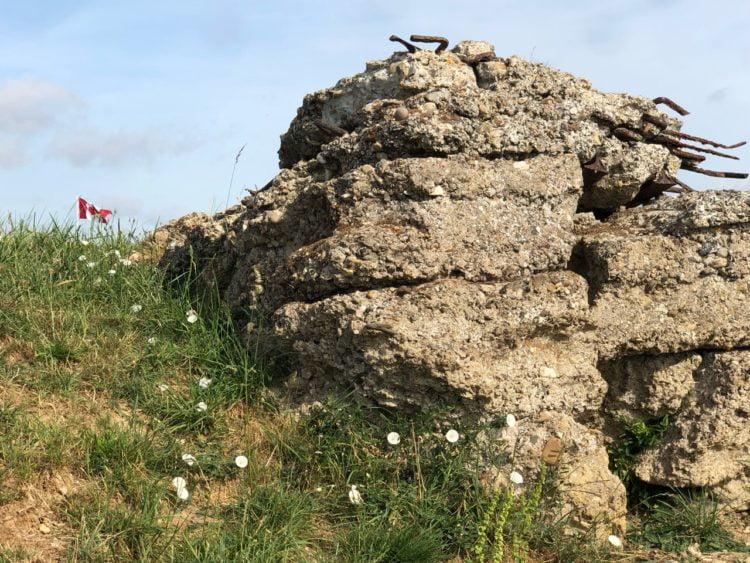 Remains of a Trench – Land Donated to Canada

I circled, parked, shed the road skin, and took in the high ground. My eyes fixed on the white stone masterpiece supporting twenty powerful figures representing faith, justice, peace, honour, charity, truth, knowledge, and hope. The memorials prominence on the horizon reminded me of Admiral Perry’s Monument on an American Island in Lake Erie, visible from the Canadian side of the lake as the only break between sea and sky as far as the eye can see. 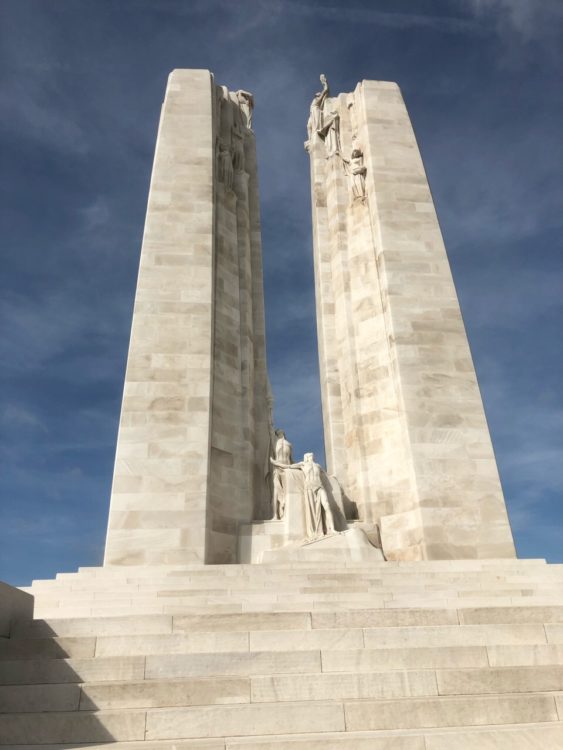 Taking a knee seemed appropriate where thousands sacrificed everything 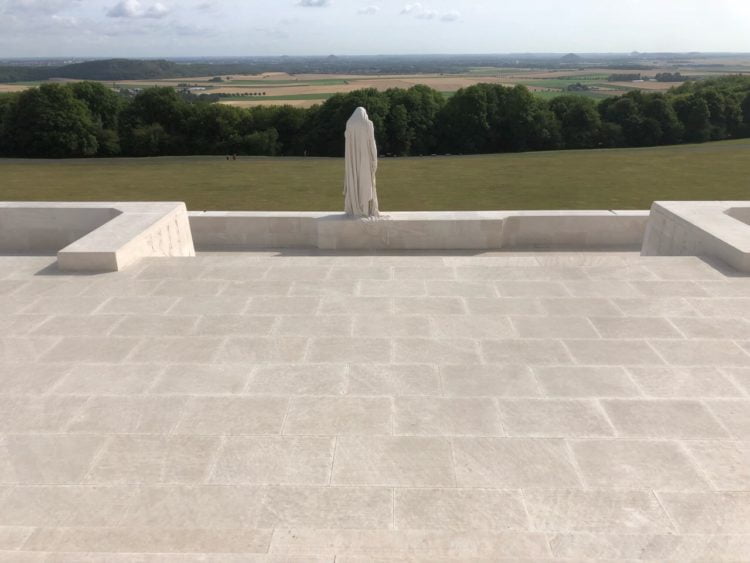 The Vimy Memorial is the centerpiece but soon my eye settles on the surrounding fields protected by a low electrical fence, “Danger Unexploded Munitions”. These are hundred-year-old trenches laying fallow, grazed by sheep. I climb the stairs and see the eleven thousand names of Canadian’s killed on French soil with no known graves. The white stone looks virtually new and I muse inwardly – “ok it’s following suit from the wall in DC”. I couldn’t be more wrong. 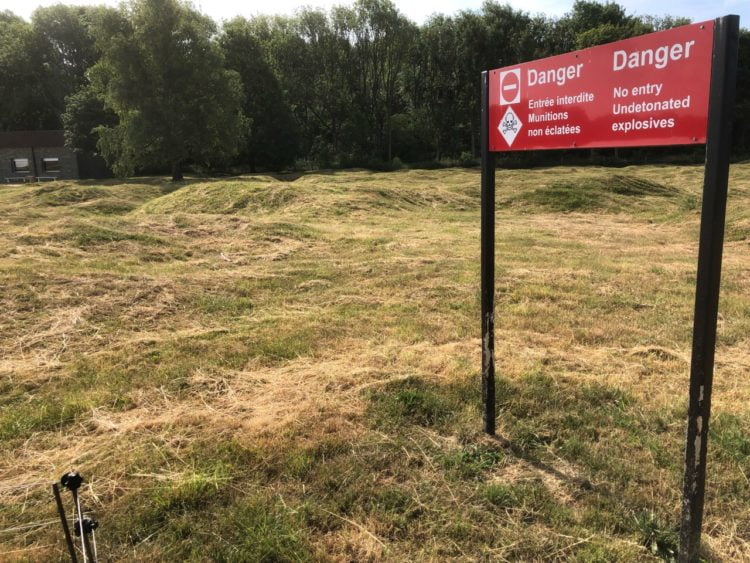 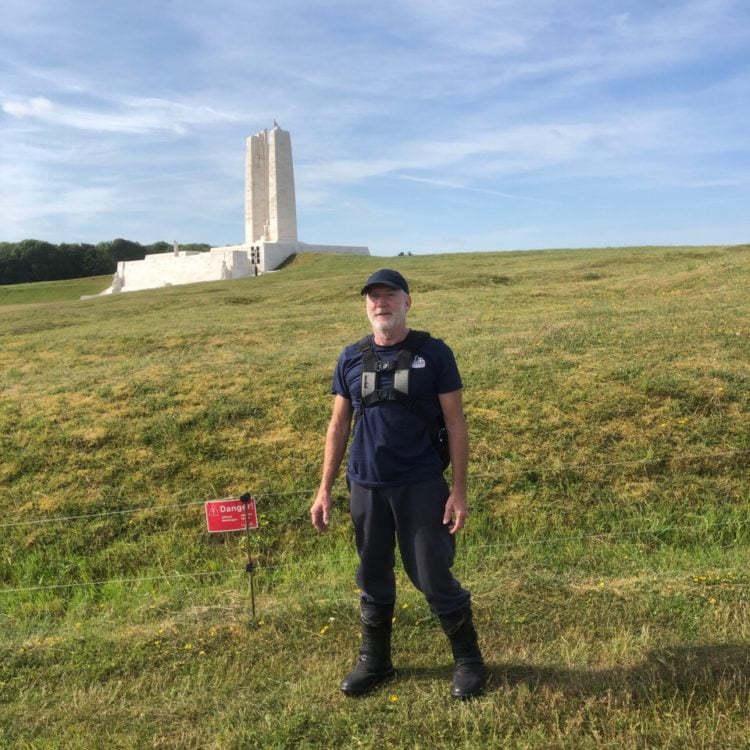 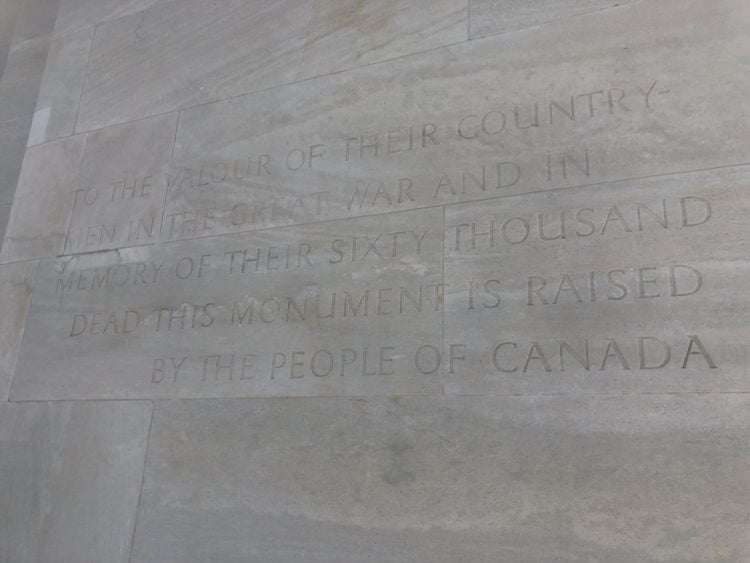 “Hello, do you have any questions?”, comes a distinctly Canadian voice from behind me. Elizabeth, from Kingston Ontario, I learn, is one of several Canadian university students working at the Vimy Memorial. In the next couple of minutes, I’m schooled on how France gave this land to Canada after the great war, and Canadians built the monument between the two world wars to mark the greatest loss of Canadian life in a single battle. The ugly American in me stands corrected – Vimy is not a copy of the DC wall.

“You really should take our tour of the trenches and tunnels – one starts in an hour or so”. I inquire about the cost. She smiles, “It’s free” – so very Canadian. 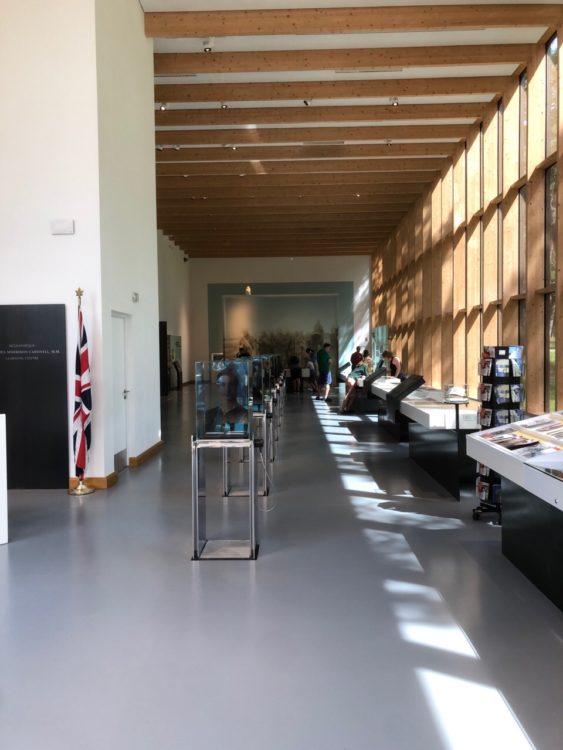 Over the course of the next few hours, I was deeply moved. You have to understand I’ve traveled largely alone for the last few months save the wonderful days spent with Vicki and Family in Scotland. Today, to my brother Doug’s credit, I found myself among not only Canadian tour guides, but as the group formed, I was surrounded by 15 Canadians gathered at this special site. They came from places like Thunder Bay, Antigonish, Port Credit, Ottawa, and so on. Honestly, I misted up a couple of times and it was good. Canadian voices speaking of familiar places and shared values. It was pretty great. As with so many of the other treasures I’ve discovered on this trip I won’t even try and recreate the experience of waking the trenches and tunnels except to echo the closing as Elizabeth led us up the steps onto the 25-meter-wide battlefield where thousands died on April 9-12 1917. Pause and reflect. 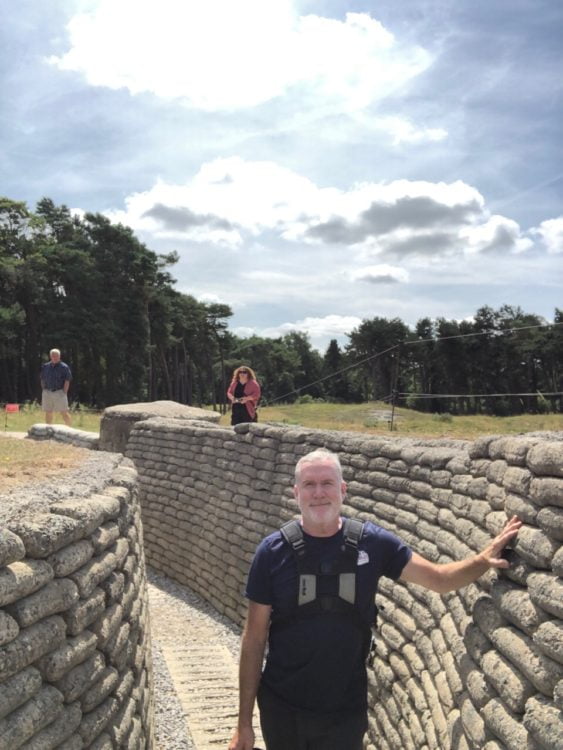 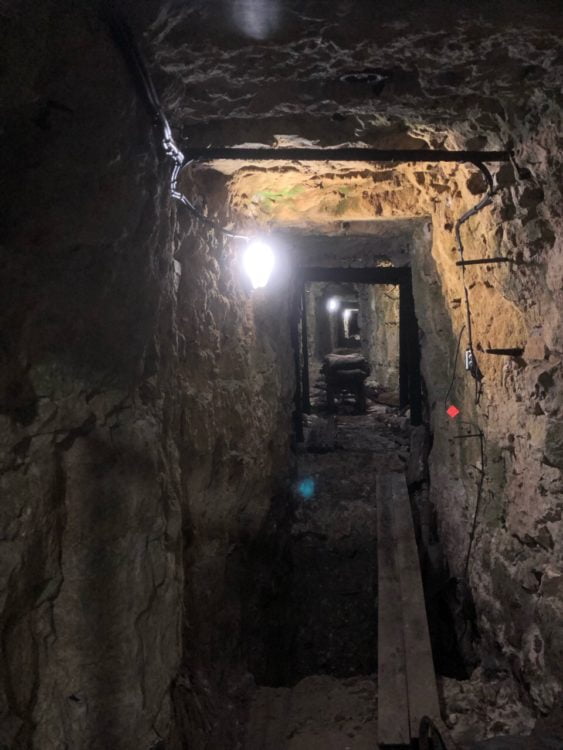 The Network of Tunnels 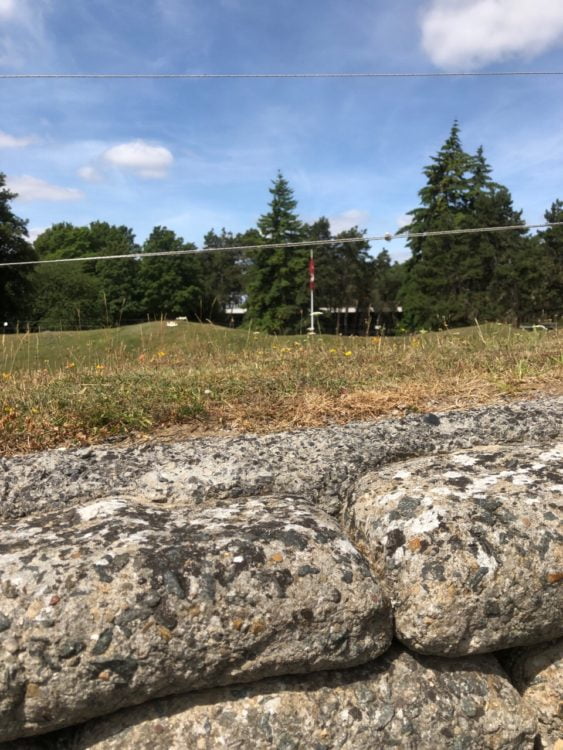 Trench level view of the battlefield 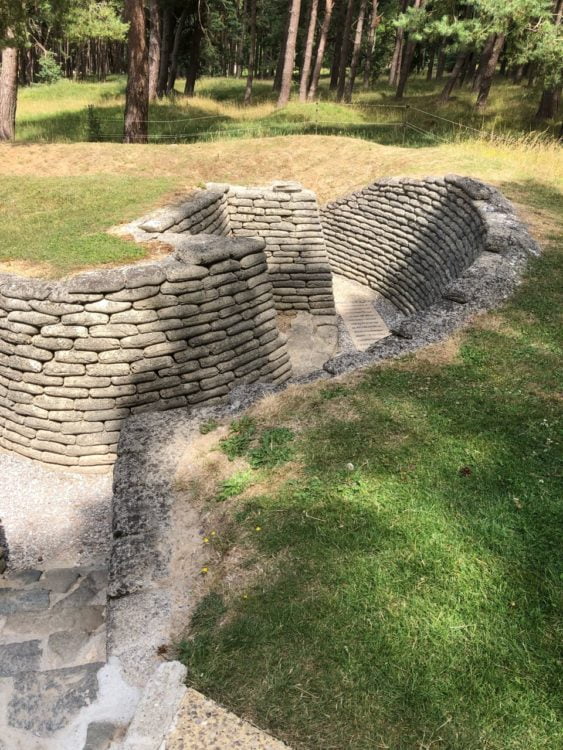 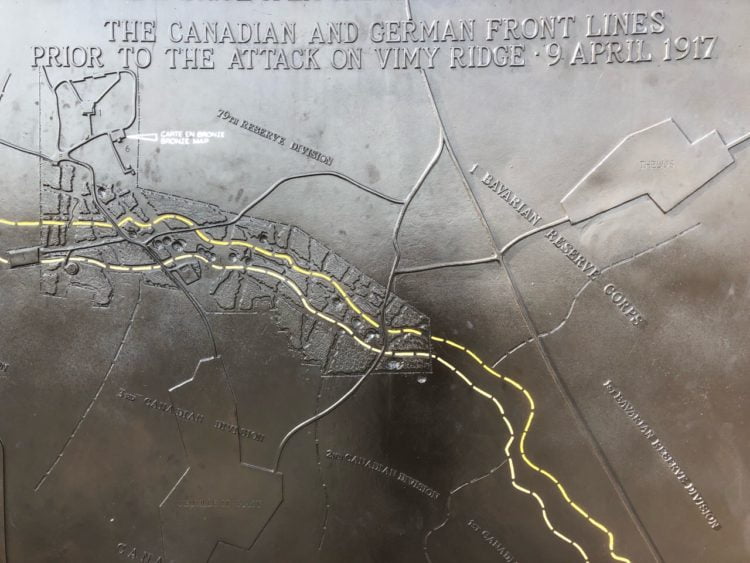 The Front – Hand to Hand Combat that Lasted Months and Years

After my tour of Vimy Ridge I had a nice long chat with my son Spencer. I mentioned that I might take a run at North Africa. He deadpanned back, “you are reading the news, right?”. Embarrassed, “No, not so much”. “Well, be careful the Brits and Americans are having trouble in the Gulf. We might get this centuries war in the middle east”. Thanks Pal. Anyway, a lot of sons and brothers died protecting our present. I hope we’re not headed there again.