The news is not wholly unexpected.  But many had hoped that the event’s usual November date would be far enough into the future for the show to go on.  Unfortunately, that scenario is no longer viable.

The decision was announced on EICMA’s website.  A small, centrally located box made the announcement: 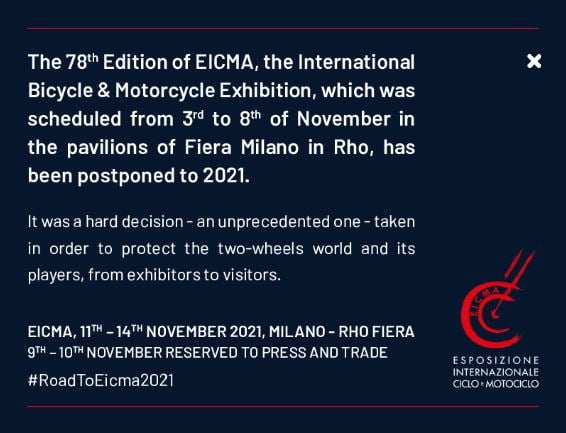 A small box on EICMA’s website announces the event’s 2020 cancellation.

The announcement says that the decision to cancel was made to “protect the two-wheels world and its players, from exhibitors to visitors.”

Other than the above box, there’s little else to see on EICMA’s webpage at the moment.  Had it been held, this would have been the 78th edition of the Milan based motorcycle and bicycle show.  The 2021 edition will still be held in Milan, Italy, and has a tentative date of 9 through 14 November 2021.

While COVID may have been a critical discriminator, one may wonder whether the earlier decisions of KTM and BMW to skip the event played a significant role in EICMA’s decision.  It also begs the question of whether the COVID-19 pandemic and the cancellation of numerous shows and events are the beginning of the end for big motorcycle shows.

Many manufacturers (like KTM and BMW) have taken to digital media to roll out their new machines and accessories.  Digital announcements are far less expensive than attending shows like EICMA.  The personnel costs are much lower, and there are no shipping costs.  So for cash strapped manufacturers, digital rollouts represent a much less expensive means to showcase their goods.

Let’s hope that 2021 sees the return of the already canceled motorcycle shows of 2020.  Do you think that motorcycle shows as we know them will return unscathed?  Let us know in the comments below.