I have a press cutting somewhere about a home invasion in England where the householder was tortured with the application of live electric cables. The police inspector in charge of the investigation called it “a shocking crime”, as well he might. 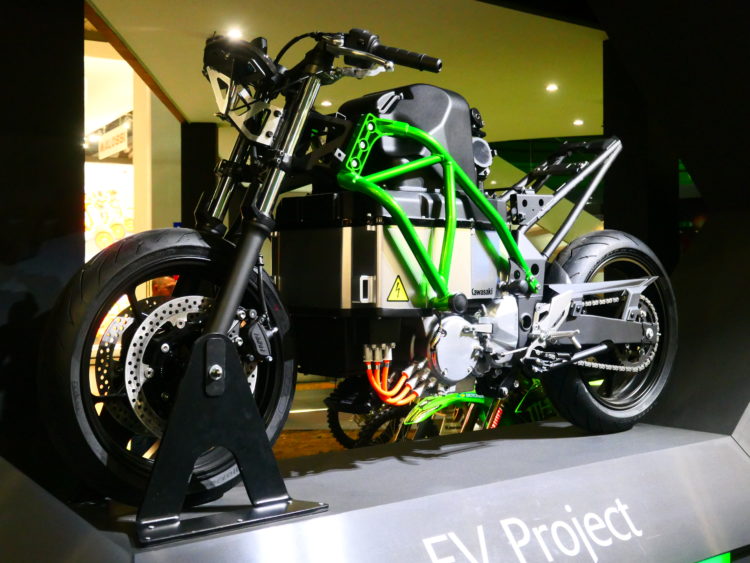 Kawasaki’s nod in the direction of electric propulsion. Somehow it didn’t look convincing.

If you’d attended the recent Milan motorcycle show you, too, would have been shocked – though admittedly in a gentler fashion. Electric bikes, scooters and motorcycles were everywhere. And while the exhibitors were still mostly from China, there were also electric bikes on the stands of some of the established European manufacturers.

Does that mean the electricity is finally here as the propellant of choice? Not as far as the German industry is concerned, it seems. BMW’s director of development, Klaus Frölich, recently told a (forgive me) shocked round-table interview in Munich that “There are no customer requests for battery electric vehicles (BEVs). There are regulator requests for BEVs.” While he was largely referring to cars, the Bavarians appear to feel much the same about two- and three-wheeler demand.

The only concession to electric propulsion from BMW at EICMA was a seriously far-out concept bike called the BMW Motorrad Vision DC Roadster (see opening photo). It “combines the iconic boxer design with the demands placed by an electric drive on technology” and “The high torque when letting loose provides breathtaking acceleration. This enormous power offers a completely new and dynamic experience, allowing us to see the future of motorcycle riding” according to Motorrad, but not in a fashion that’s anywhere near production. Mind you, it looked extremely cool, an unusual property in the field. 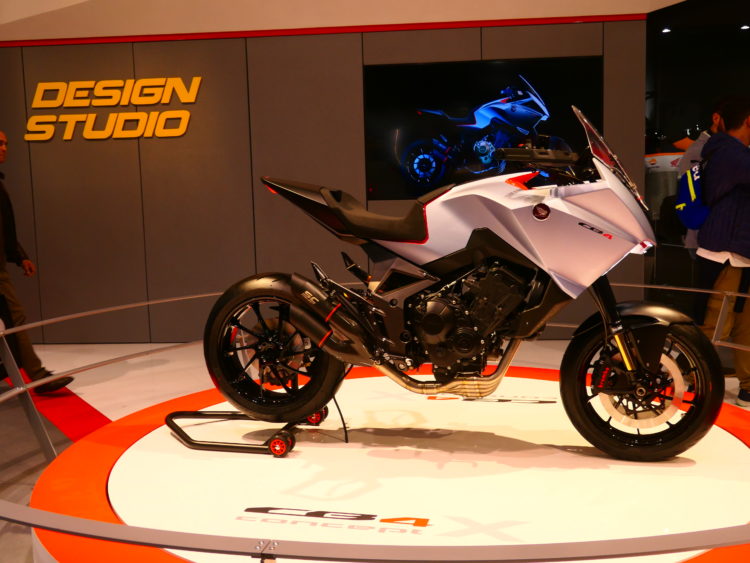 A motorcycle does not have to be electrically-driven to be ugly, as Honda demonstrates here.

So why all the electric bikes of various types at EICMA?

There seem to be three reasons. The first, obviously, is the raging success of electric propulsion in China, which is by far the biggest source of sparky bikes. Not only do the various manufacturers hope that the Europeans will follow their Chinese compatriot’s lithium lead, but they make so many that it’s no problem to divert a few hundred or thousand to Europe.

With respect to BMW’s unquestioned expertise, please note that Chinese manufacturer Niu is the fastest-growing brand in just about all European markets it has entered. It showed three new models in Milan, as well as a maxi-scooter concept. Niu is not (yet) available in Australia, but it appears to be going great guns in the US from a small beginning, so its success is a clear lesson.

Secondly, featuring a couple of flash electric bikes on your stand establishes some environmental cred. You don’t really need to put them into production; the fact that you have designed and prototyped them demonstrates that you care about the state of the world’s climate. 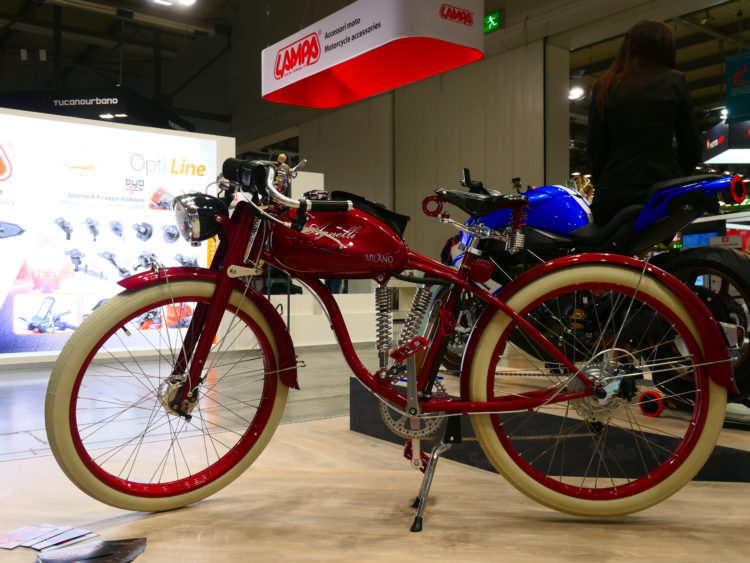 A bloke in Milan makes these by hand, and they are beautiful examples of what electric bikes can look like. If you need to ask the price you can’t afford one.

Finally, there’s the opportunity to make some serous bucks. While there is an obvious limit to the amount you can charge for conventional bikes if you expect to sell reasonable numbers, that’s not so for electric ones. Early adopters and well-heeled environmental enthusiasts (who are also keen to be seen to be doing good) will pay well over the odds for electric bikes. Take the undeniably cute and seriously retro Schwalbe (swallow) going into production for Govecs. Its Bosch motor and plastic body will set you back something like 10,000 euros. One swallow may not make a summer for Govecs, but a decent production run definitely will. 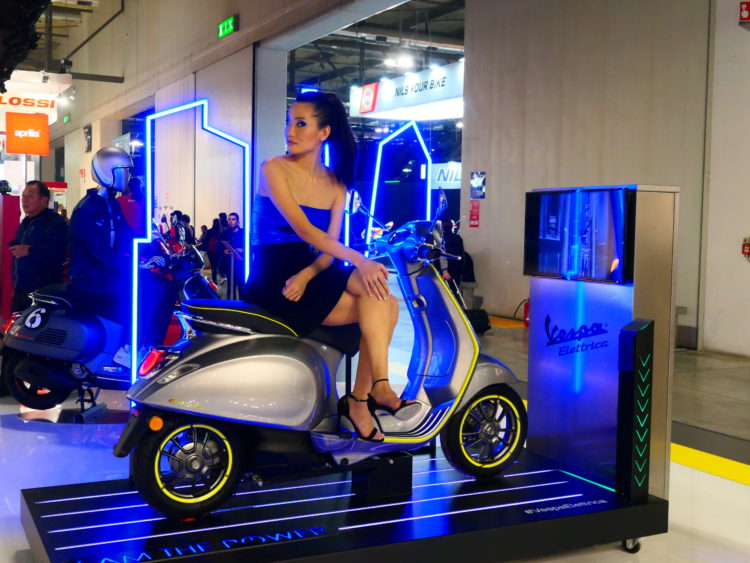 And yes, Virginia, there is an electric Vespa.

A combination of cost, unproven reliability and doubtful legality (in Australia, and I presume elsewhere) keeps me from taking electric vehicles seriously – for the time being. I’m with BMW’s Herr Frölich (whose name, incidentally, means “cheerful”) for now. But I also believe that the balance between internal combustion and electricity will change. The only question is when. 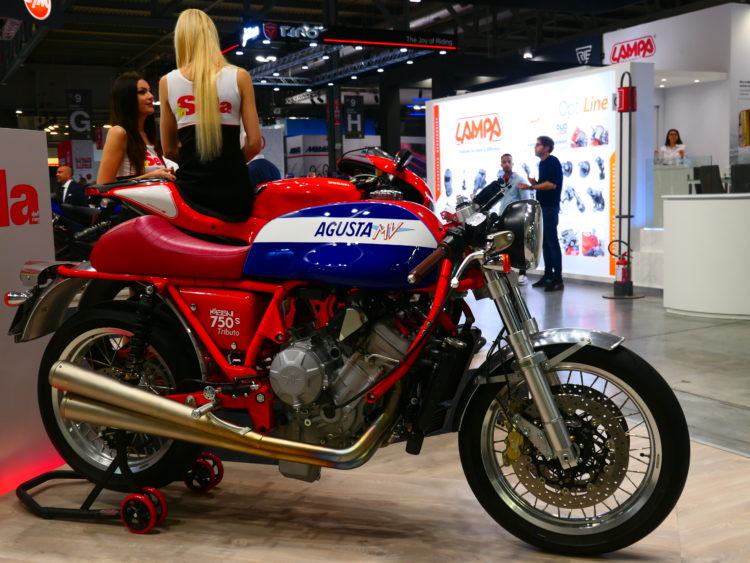 Will there ever be an electric motorcycle as beautiful as this aged MV Agusta 750? Maybe. But it will be a while yet.

The answer remains elusive. While some major manufacturers are making plans to add electric motorcycles alongside their internal combustion brethren, and indeed some have already dipped toes into the water – witness KTM’s Freeride – many are still at the cloud cuckoo land prototype stage, or not even there.

Meanwhile the Chinese industry is not letting up with the pressure it is placing on the market. Clunky looking bicycles, slick-looking scooters and Lego-inspired motorcycles all vied for the eyes of show-goers, and as the saying goes – can 1,433,783,686 people be wrong? 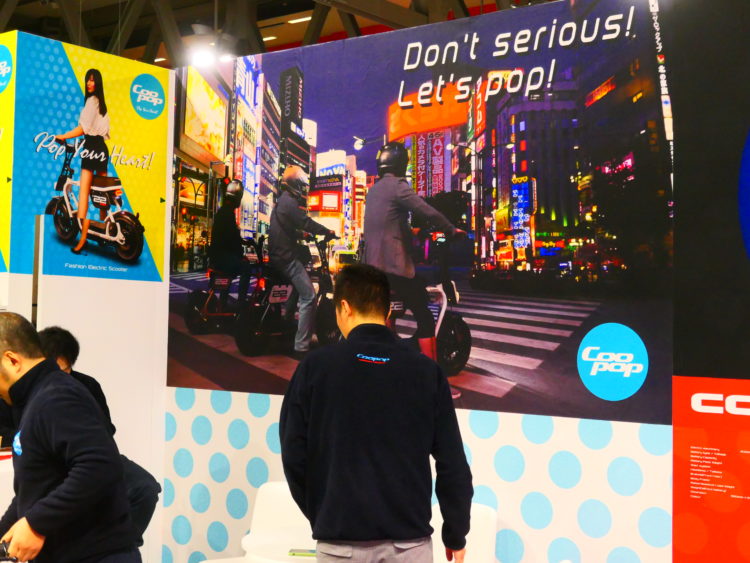 Can’t really argue with that, can you?

It will pay you to be aware of the growing power of electricity. You don’t want to wake up in shock one morning.