I have just finished reading an article about a little escapade that occurred in a Dassault Rafale B fighter jet.  It turns out that a long time employee was gifted a ride in the supersonic bird for his retirement.  The unnamed employee really didn’t want to take the flight, but he didn’t want to disappoint his co-workers, so he agreed to go.

Because the ride was a surprise, he received a very quick safety briefing and scrambled into the fighter.  As the bird climbed into the sky with its passenger aboard, no one told him that the black and yellow striped handle between his legs was not a grab rail.  It was the ejection seat activation mechanism.

And of course, just as the pilot began to level the aircraft, you can guess what happened.  Yes, the frightened passenger grabbed the black and yellow handle and ejected himself from his retirement present ride.

This story got me to thinking.  How many times have I been on the bike when I did something foolish and ultimately paid an embarrassing price?  One happened to me, which at the time was not one bit funny, but in retrospect, I had to laugh at my foolishness.

Kim was on a week plus vacation with her sisters and dad.  That left me a bunch of time solo, so I planned to ride from my home in Vermont to Mississippi and ride part of the Mid-Atlantic BDR.

Somewhere in southern Pennsylvania, a bug flew into my eye.  I immediately pulled over, jumped off the bike, and struggled to get my helmet off.  It was like having an icepick in my eye.

Since I wear contacts, I carry a small bottle of saline solution, and it was locked in my top box.  I quickly grabbed my keyring that held the key to the top box and also held the electronic key to the bike.  I unlocked the padlock on the top box and hung the lock from a tie-down hook.  A quick one-eyed search later, I was able to find the saline and dump it into my eye.

Phew!  Much relieved, I closed the top box, put my helmet back on, and jumped on the bike.  Pushing the starter button, the bike came to life, and I was underway once again.  As I rode on, I told myself that I was smart to have the saline so close by and to make it so easy to get to.

About 125 miles later, it was time to get some fuel.  I found a local gas station, turned off the bike, and filled it with fuel.  I paid for the gas in the gas station’s convenience store walked back to the bike.  Jumping on, I thumbed the starter button and…nothing.  Nothing at all.  I tried pushing the starter button several times, but all I got was a dark display panel and a silent bike. 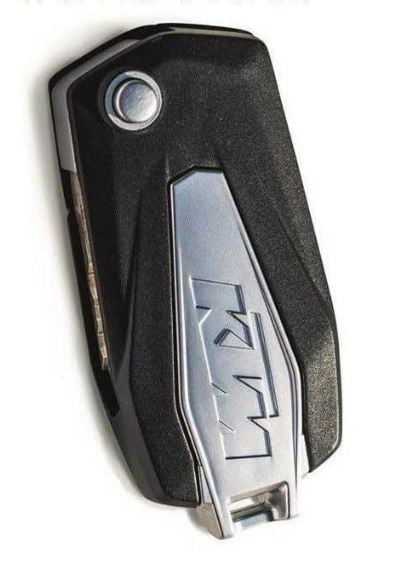 A key just like this one rests somewhere on the Mid-Atlantic Backroads Discovery Route. Photo credit: eBay

A car had pulled in behind me and was patiently waiting for a turn at the gas pump.  Pushing the bike out of the way, I gave the man in the car a nod for being so patient.

What could cause a nearly new bike to die after happily and capably carrying me hundreds of miles over off-road terrain?  I pushed the bike completely away from the pumps and sat down next to the convenience store.  It was time to think.

I was in very rural Pennsylvania, and there weren’t any dealers close by.  And to top it off, having a dealer close by really didn’t matter unless it was within pushing distance of the gas station.   Then it hit me.  I must have left the electronic key in the convenience store somewhere when I paid for the gas!   The bike wouldn’t start because it couldn’t “see” the key.

I jumped up and nearly ran into the gas station.  I walked around the entire convenience store and couldn’t find the key.  Then, I asked the cashier if I had left the key on the counter.  He just gave me that “you idiot look,” and he said no.  Now I was getting angry.  Where did I put the key?

Then it dawned on me.  I remembered the bug in the eye incident and my rush to get the saline out of the top box.  I had hung the key that on a hook on the top box, and once I had flushed my eye out, I simply closed the top box and got underway.

When I got back on the bike, the key had been hanging from the top box, and the motorcycle could “see” it.  But as I traveled over the BDR, the key fell off somewhere in the woods.  Since the bike was already running when the key fell off, everything was normal.

That is until I reached the gas station and turned the bike off.  Now that the bike was turned off, it couldn’t see the key hidden somewhere on the trail of the Mid Atlantic BDR.  And, it wasn’t going to start until it saw a key.

Luckily, I had also brought along the non-electronic key for the bike.  I placed the key near the sensor, and once again, with the push of the starter button, the bike came to life.

So that’s my story of funny embarrassment.  Has something similar happened to you?  Let us know in the comments below.