Sometimes it’s the little things that really make a difference.  For example, during a hot day last summer, I was loading my KTM 1290 SA-R and Kim’s Ducati Scrambler into the bed of my 4 wheel drive (4wd) pickup.   With two big bikes, the job is a chore.

The truck’s 4wd system makes the truck fairly tall.  So I have to get the ramps out for loading and unloading.  Then there’s the job of running up the ramps with the big machines and jamming them into the bed of the truck.  The first bike is easier, the second bike is work.  It’s a very tight fit.  Once both bikes are in the truck’s bed then the real fun starts.

With the bike’s front wheels up against the front of the bed, it’s time to tie them down.  And it’s not as easy and painless as many of us would like to think.

My truck has four rather conventional tiedown points, one in each corner.  And anytime there are two bikes in the bed of the truck, getting to those two front tie-downs is a real pain.  It’s fairly easy to tie down the bike’s fork tubes closest to the outboard tie-down point.  But getting the inside fork tubes securely tied down can be a real hassle.

The process usually requires threading the tiedown hooks through the spokes of the front wheel of each bike.  And, you have to make sure that the tiedown isn’t putting much tension on the spokes or overly compressing the front fork.  So getting it right can take a couple of tries and adjustments to get the hook to the right place. 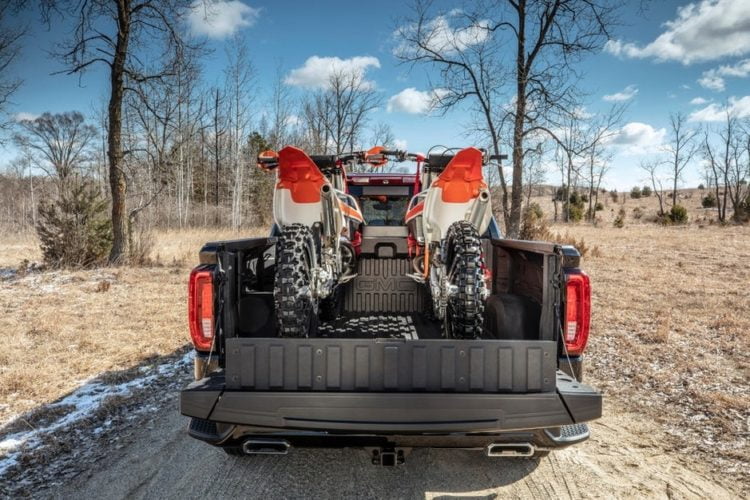 Two bikes loaded in the CarbonPro bed with the MultiPro tailgate.

With the bikes tied down, off you go.  For me, it’s a nearly 3-mile jaunt down the mountain on a potholed and washboard dirt road just to get to the pavement.

And despite my best efforts, there have been times when I’ve reached the pavement and looked in the mirror to see one or both bikes leaning in a direction that I didn’t plan.

Sometimes, the front wheel slips against the back of the bed, or the handlebars turn one way or the other resulting in a bike that is not as secure as you would like.  That calls for another stop at the side of the road for another re-adjustment of the tie-downs.  Ugh.

Then you start thinking that tieing down a motorcycle is not rocket science and why it is often such a pain?  This should be a fairly simple task.  But often it’s not.

So when I recently was contacted by a GMC representative about the GMC Sierra Denali 1500 and its special bed that is claimed to be designed for motorcycle hauling, I was interested.

I hear you saying to yourselves, “What’s so special about the bed?”    Well, it’s seriously different than the bed in my truck.  First off, the bed is not aluminum or even steel.  It’s made out of a material they call CFRP (short for carbon fiber reinforced polymer) and the bed is called the CarbonPro.

GMC says the CarbonPro bed is lighter and more durable than either of the two metals.  Interesting.  Ok, so what makes the bed better suited for bike hauling?  That’s where the simple things come in.

First off, there are three indentations in the front of the bed box designed specifically to hold a bike’s front wheel.  If you’re only hauling a single bike, you can use the center indentation.  If you have two bikes, you use the two outboard indentations. 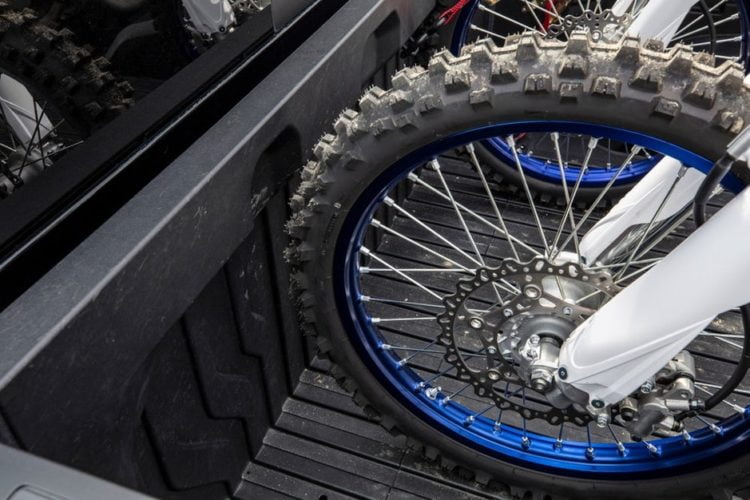 Indentations at the front of the bed hold the bike’s front wheel for stability.

While those indentations are really nice, they’re not the first to appear in a pickup truck.  I previously owned a Honda Ridgeline which had them as well.  But having them is something that really makes tieing down bikes more secure.

At the beginning of this article, I said sometimes it’s the little things that really make a difference.  The indentations are the first simple fix.  But then there’s getting to those tiedown points at each corner of the pickup’s bed.

GMC has come up with such a simple and elegant solution that it’s a wonder that other manufacturers don’t already include them.   What are they?  Although the bed is loaded with tiedown points, the CarbonPro bed has two separate tiedown points in the middle of the front of the bed. 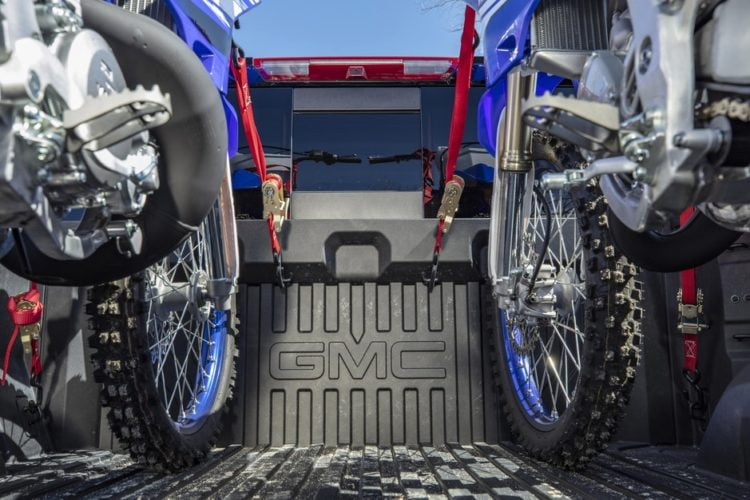 Two bikes inside the CarbonPro bed and central tiedown points.

With the tiedown points centrally located, there’s no need to thread the tiedown-hook through the front wheels and spokes.  Just like the outboard tie-downs, all you need to do is put the hook into the tiedown point and tighten.  Simple and elegant.

Some may think that it would be easier to just drill through the bed of the truck and mount up some wheel chocks.  Then bolt in a couple of tiedown points in the bed’s front rail and viola’ you’ve got essentially the same thing.

So while that is possible, it can cause issues.  In many parts of the US, drilling through metal parts is not such a good idea.  Here in Vermont, as well as much of the northern US, the roads are treated with salt and brine.  Obviously, it’s highly corrosive and the holes and potential bare metal caused by drilling can accelerate corrosion. 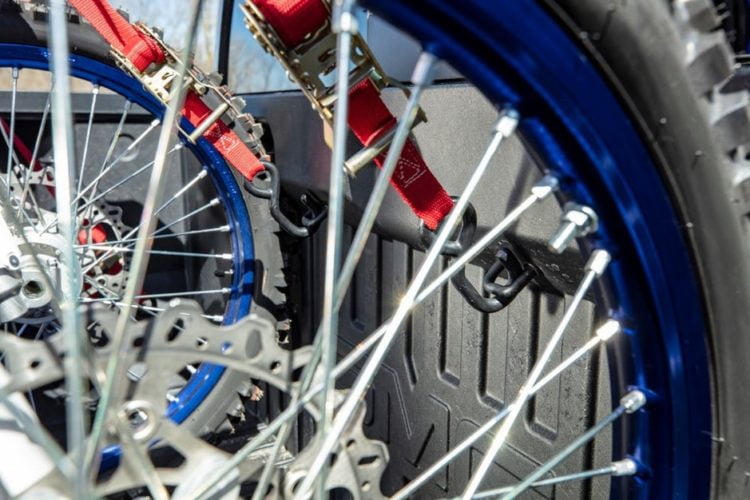 Threading tiedown hooks through front wheels are no longer required.

In many parts of the US, a truck’s life can be shortened by rust.  Although the truck is running fine, rust and rot can make it impossible to get a truck inspected and registered for the road.

GMC also offers a specialized tailgate called the MultiPro.  The tailgate has multiple configurations that can provide a step for loading ramps, help you step up into the bed, and also has a lift-up panel that acts as a cargo brace to help retain cargo when you have the tailgate down. 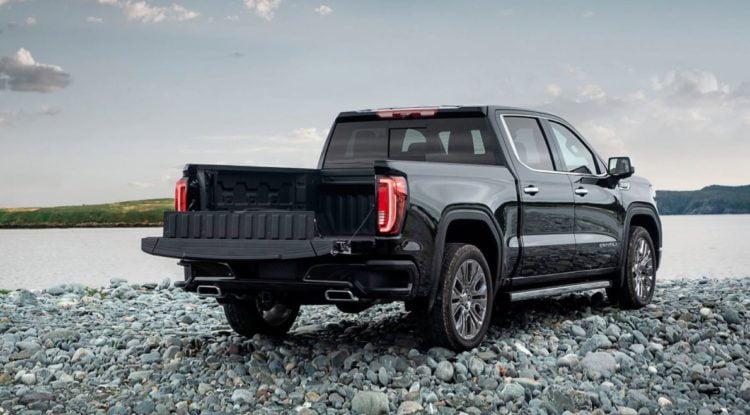 All these ideas sound pretty good.  But until I’ve tried them I can’t really say how useful they are.  I’m anxious to see if everything works as I hope in day to day practicality.  And, it appears that I am going to get that opportunity.  GMC says they will loan us a truck for testing.  Once we get the truck, we’re hoping to be able to try out both the CarbonPro bed and the MultiPro tailgate.

We’ll let you know how things work out.