There’s really nothing like the human spirit.  Some of us, when placed under extreme pressure, turn what can be a life-ending situation into a success story.  And a person named Emile Leray has that special kind of spirit.

The story began in 1993.  Emile wanted to cross a portion of the Moroccan desert with his Citroen 2CV.  The reason(s) for his crossing is unclear.  But before starting, he checked in with the Royal Gendarmerie (Moroccan military).

The Gendarmerie told him that the area was off-limits, and he could not continue.  But Emile ignored them.  Checking to see that he was not being watched, Emile quickly drove off into the rocky terrain of the desert.

Leray had traveled around Africa about ten times and knew the region well.  Unfortunately, it was not long before Emile crashed his car into a rock rendering the vehicle useless.  Later, Emile told the New York Daily News:

“In Africa they call [THE CITROEN] the ‘Steel Camel’ because it goes everywhere – provided you drive it gently.  I obviously was too rough because I broke it.”  – Emile Leray to New York Daily News

Worse, the nearest village was about 20 miles away.  Emile decided he didn’t want to risk the trek by foot and decided to find another means to get there.  Equipped with water and a hacksaw (and likely some rudimentary tools), he chose to cannibalize his wrecked car to build another form of transportation; a makeshift motorcycle. 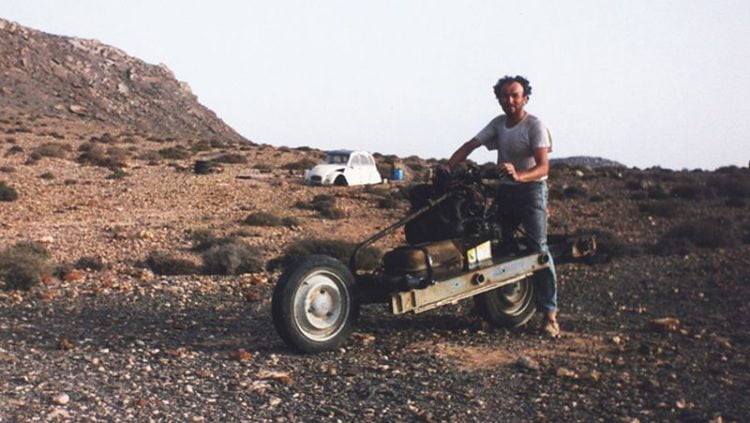 Emile Leray’s human spirit comes through in the rocky Moroccan desert. Here he sits on his newly created motorcycle.

And that’s when he started taking his wrecked Citroen apart.  First, he took the body off the car and turned it into a shelter protecting him from sandstorms and other desert hazards.

He shortened the car’s chassis and reattached the axles and two of the wheels.  Last he installed the engine and the gearbox in the middle of the bike. 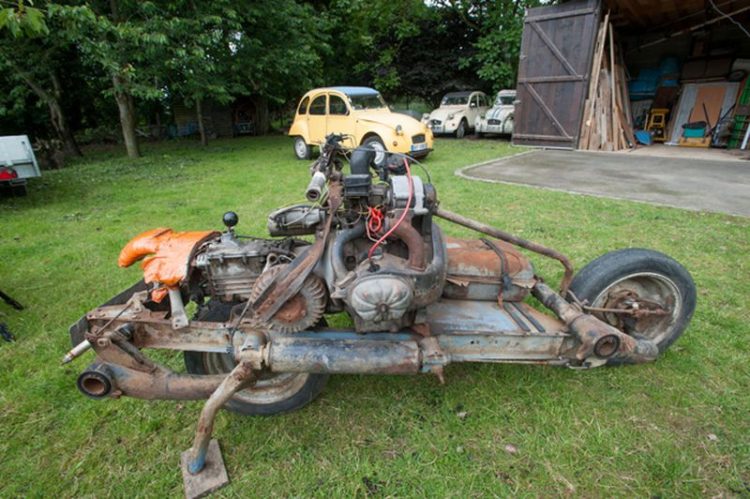 The entire project took him 12 days.  By the time he had finished the moto, he had a half-liter of water left.

“I put myself in what one calls survival mode. I ate less.  I monitored my supplies of water and food to make them last as long as possible.” – Emile Leray to New York Daily News

Once completed, Emile then got on his new motorcycle and rode to the nearest town.  If you had Emile’s skills, what would you have done?  Would you have tried to walk to the town, or would you take the time to try to rebuild your means of escape?  Let us know in the comments below.