I did something remarkably stupid today – even for me, if you ask Mrs. Bear. I rode up to see a friend of mine, Kim, who runs the Grey Gum International Café up on the Putty Road, heading north from Sydney. The area has been badly affected by fires, and the road past the café was still closed so she wasn’t getting much business. But I knew I’d be able to get there for a coffee and a slice of her excellent apple pie, and to offer a little moral support.

My plans are usually laid pretty carefully, even if I do say so myself, and I had this ride all sorted. It was about 260km, three hours there and back. I knew it would be hot, so I set out my Draggin Jeans; a light, vented Ixon jacket over a white cotton T-shirt; an open face Shoei helmet; a pair of grey Klim summer gloves and a light pair of short Dririder boots. This is about the least and lightest gear I would normally ever wear in summer.

The reason I mention the brand names is so you know that I wasn’t cutting corners. I was probably as well equipped as anyone with a reasonable budget could be. In order to get the advantage of the breeze I took one of our long-term loan bikes, a BMW F 750 GS. That has the advantage of being fairly light, as well. All set, then. 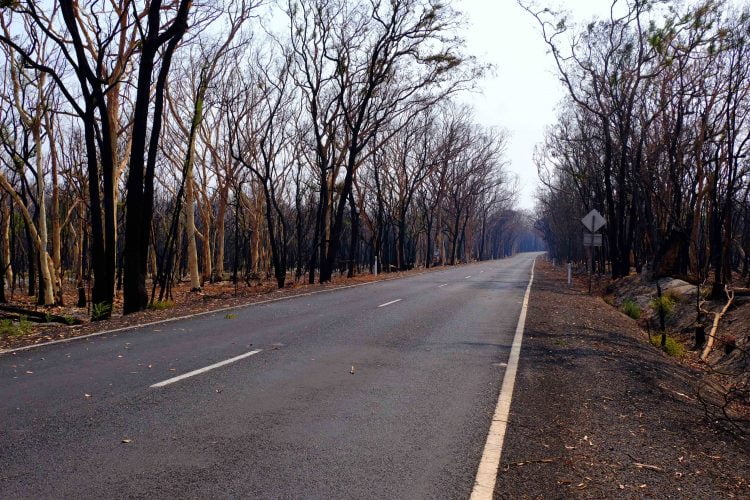 Sometimes I’m surprised that the road hasn’t melted in the fires.

Except that, while I had counted on it being hot, I had not counted on quite how hot it was going to be. I’d seen 40 degrees (104 Fahrenheit) in the weather forecast on my phone, and although that was hotter than I’d planned for, it wasn’t what I think of as really extreme. I forgot that Grey Gum is well beyond the Weather Bureau forecast reach. 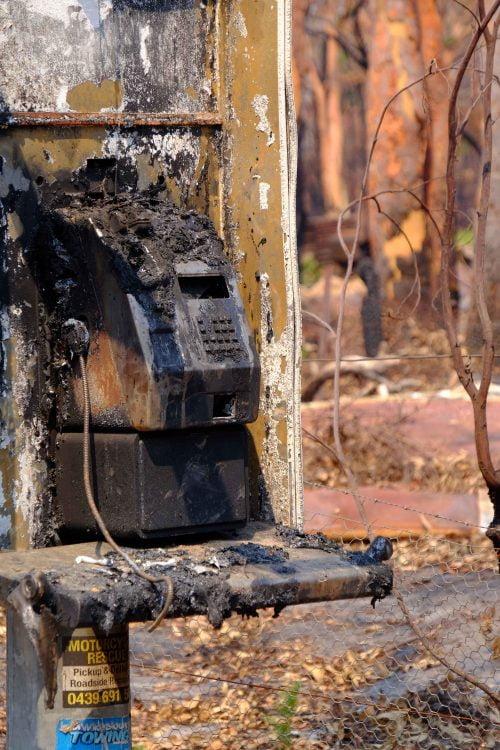 Once it was a roadside public phone. Now it’s a weird kind of robot sculpture.

The ride up to Grey Gums was hot, but I stopped for a bottle of water and a soft drink along the way and arrived in reasonably good shape. As I pulled in, though, I noticed that the bike’s thermometer was reading 47 degrees (116 Fahrenheit). A bit of a chat with Kim, a slice of her pie and a coffee, another bottle of water and one of apple juice and I was back on the road.

It got hotter, and I closed up the jacket and lowered the helmet visor because the breeze generated by the bike’s movement was now heating me up further rather than cooling me. By the time I reached the Colo River, some 50km from Grey Gums, the heat had done its work. Instead of staying on the main road and getting home as fast as I could, I turned off onto a dirt track that would not only add distance to my ride, but also require more alertness and slow me down – adding extra time. 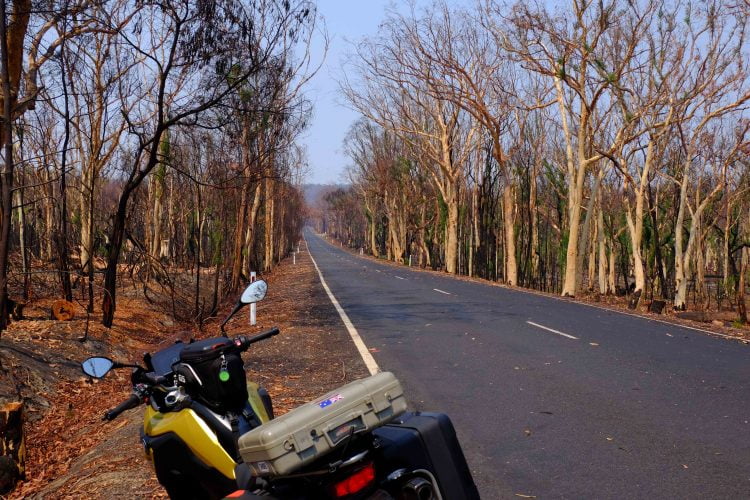 The trees are orange rather than black because they’ve shed their bark. Some of them are already regenerating, a week and a bit after the fire.

What had happened to me? It’s very simple, and I suspect I’m not the only one who experiences this. The heat had messed with my brain sufficiently to make me just that little bit irrational. I don’t know where the idea of taking the track had come from, but against all common sense it suddenly seemed like just the thing to do. My critical faculties had pegged out from the heat and I headed off along the river.

I’ve heard of an extreme version of this from a friend who used to drive a truck between Perth and Melbourne across the Nullarbor Plain, Australia’s desolate divider between east and west. He told me that he’d seen a motorcycle parked at the edge of the road, out in the desert, with no sign of the rider. He stopped and discovered a line of footprints leading off at right angles. Following them, he found scattered articles of clothing until he finally got to the rider, nearly naked in the burning sun and unconscious. When he’d dragged him back to the truck and re-hydrated him, the bloke had no idea what he’d been doing. 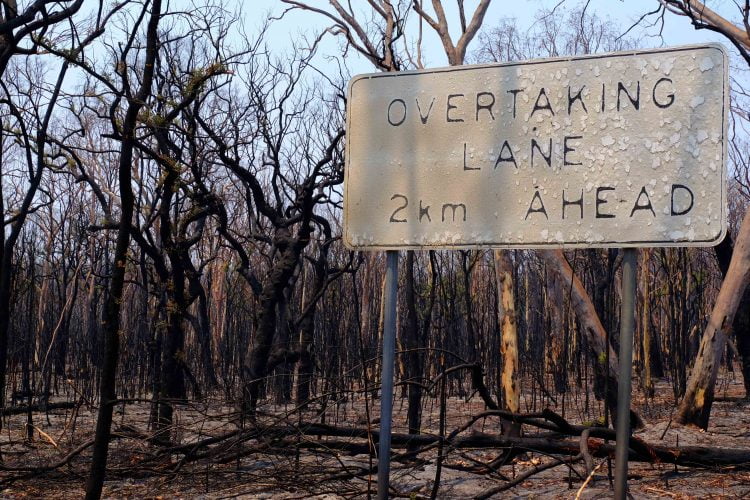 I was in nowhere near that kind of shape, but I wasn’t rational, either. When I reached Tractor 828 café, in the otherwise unremarkable little town of Ebenezer, I had sense enough to stop and pour a bottle of iced water over my head, much to the amusement of the audience in the café. I hardly felt it. After drinking another bottle, I set out to cover the remaining 50km home.

The temperature dropped to 44 and then rose again to 47, and after a while I was travelling on instinct. Fortunately I know the road well. I was riding erratically to the point of slowing irrationally, weaving from one lane to another and failing to notice when the traffic lights had changed, but I made it. I should have stopped to recover, but that was too sensible. With the bike safely in the garage, I collapsed and hyperventilated for a while before dragging myself into a cold shower.

So when you make your plans, make them carefully but always allow for a last-minute change in one or more of the parameters. And remind me to do the same, okay?