As a kid, I read the Jack London stories, “The Call of The Wild” and “To Build A Fire.”  I enjoyed them immensely but somehow lost interest in his other works.  And then as kids do, I moved onto other books and mostly forgot about London.

But strangely enough, Jack and I were sort of reunited in the Canadian Yukon.  And, that’s the genesis of this “Oddities Uncovered.”

Kim and I were out riding Alaska and the Yukon and planned to attend the Dust To Dawson (Not a Rally!) gathering in Dawson City, Yukon.  If you’ve never been there, you should put it on your bucket ride list.  It’s a town out of the 1800’s goldrush with dirt roads and boardwalks.

While we rolled around the town, we came upon a small log cabin located around other traditional looking homes.  There was also a small structure perched atop some logs about 15 feet in the air.  Since both structures seemed a bit out place, we stopped to check them out.

It turns out that the cabin is the actual cabin that Jack London lived in while he was trying his luck mining for gold during the Yukon Gold Rush.  The building on stilts beside it was a re-creation of a storehouse that would have been used to store food away from hungry animals. 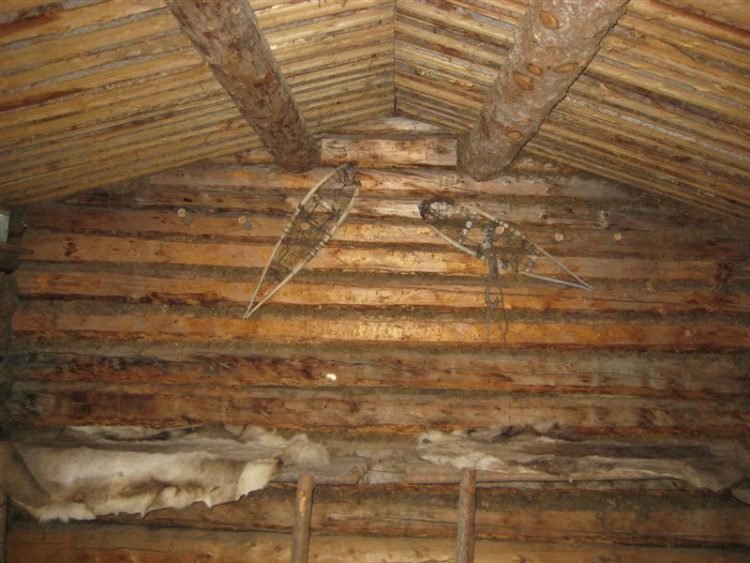 The back wall of London’s cabin where his name was scrawled on a log. His bed lies covered in animal skins along the wall.  Photo credit: Mike Botan

But the cabin looked out of place since it’s in Dawson itself.  It hardly seemed to be a place where London could stake his claim.  So is this really his house or is it a re-creation?  It turns out the answer is a bit of both.  That’s the interesting part of this story.

Yukon author Dick North is the reason why the cabin survives.  Through his efforts, the cabin was discovered in the bush about 75 miles (120 kilometers) from Dawson City.   North did a great deal of research and ultimately found a clue in the mine recorder’s office.  In one of the claim record books, North found London’s claim, which read, “Number 54 above discovery ascending the left fork of Henderson Creek”.

Later that year, some of North’s friends wrote to him that a trapper named Ivor Norback had once used London’s cabin in 1936 and that London had written his name on a log in the back of the cabin.  With this news, North contacted another friend that worked for the White Pass & Yukon Railway. 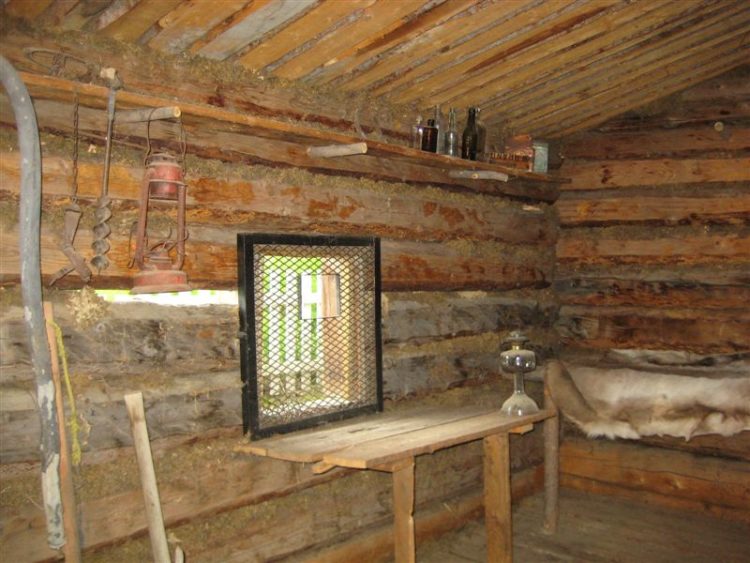 Years later, recognizing the historical significance of the signature, MacKenzie went back to the cabin and “carefully” sliced it off the log.  He brought the signature to mining recorder Sam Wood for safekeeping and forgot about it.

Trek to the cabin

This was enough for North.  North embarked on a journey with the help of locals to find the cabin deep in the Canadian Yukon.  The trek and search went on for five days until London’s cabin was located.

North quickly approached the cabin.  Its sod roof had collapsed, but he could still get inside.  There, on the back wall, was the log with a 4-inch by 12-inch slice cut out of the middle where London’s signature had been.

Now that North thought he had found London’s cabin, the task of proving it became his primary concern.  London’s signature had already been removed from the cabin.  So now North started his search for the signature.

North returned to the mine recorder’s office and found that Sam Wood had died.  But North wouldn’t be stopped.  He contacted Wood’s widow, and she still had the signature.  She sent North a picture of the signature, and North began his quest to authenticate it.

Fight over the cabin

But this is not the end of the story.  Now that North had found and authenticated the cabin, what should be done with it?  He believed that the cabin should be disassembled and moved to Dawson City, where more people could see and enjoy it.

However, London’s hometown is Oakland, California, and they wanted to have the London Cabin reside in the city’s Jack London Square.  And so began a bit of a tiff between the two cities about where London’s house should reside.

Ultimately, North and Russ Kingman, who handled the advertising for the Jack London Square Association, came up with a Solomonesqe solution.  Together they decided that each city should get a part of Jack’s cabin.

So is the cabin the original cabin that Jack London resided in, or is it a re-creation.  The answer is “Yes,” and that story is part of this Oddities Uncovered and how I was reunited with Jack London, sort of.

If you’d like to know the full story of the cabin, you can visit the Jack London Museum website.