I came across an article in the Prescott Arizona eNews the other day.  It was about a story of a motorcyclist that crashed on an Arizona highway.

The reporter, Conrad Jackson, is a  Paramedic Engineer with the Prescott Arizona Fire Department.  Jackson told the story of a recent motorcycle crash he worked on.

According to Jackson, the motorcyclist in his twenties lost control on a curve and “laid his motorcycle down” sliding into oncoming traffic.  Although the rider was not struck by oncoming vehicles, he still suffered serious injuries.

According to the report, the rider’s injuries were able to be stabilized on the scene, and he was “packaged for transport.”  Ultimately the motorcyclist was taken by ground ambulance to a local medical center for treatment.

By now, you may be wondering why this particular incident is on ADVRider.   So now, here’s the rest of the story.

After first responders arrived on the scene, the highway was closed to traffic from both directions for 30 minutes.  During this time, the rider is being treated and evaluated for evacuation to a trauma center by helicopter.  Although air transport was not ultimately necessary, first responders had taken action.  They wanted to ensure that the appropriate aid could be given to the injured rider by either ground or air. 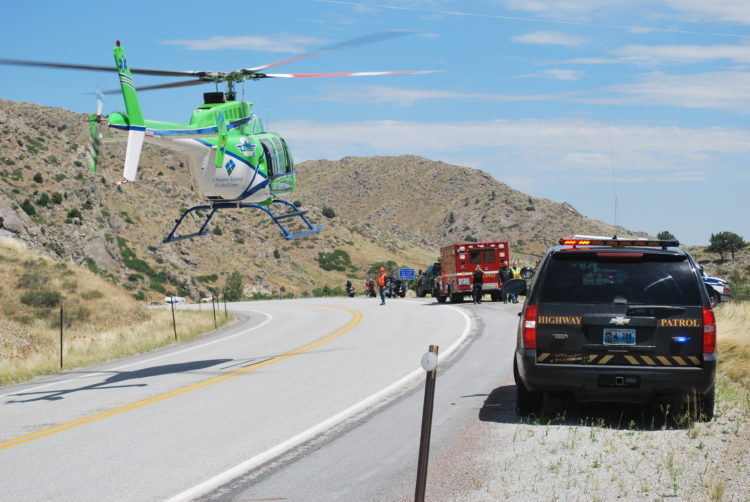 Someday, you may need a rescue. It’s important to help first responders do their jobs. Photo credit: Wyoming Highway Patrol

But unfortunately, in two separate incidents, motorcycle riders attempted to drive through the barricades, which had been placed across the roadway well in advance of the scene.  The riders had become impatient and were ultimately stopped before they got to the accident scene where a helicopter may have had to land to assist a fellow rider.

We all get impatient and have places to go to.  But in the case of crash scenes, it’s important to be patient so that the injured patient can get the appropriate medical care.

As the first responder’s article pointed out:

The fire department would like to remind everyone that failure to abide to emergency closures of roadways can result in injury to first responders and negatively impacts operations, such as landing a helicopter. Roadways will be reopened as soon as it is safe to do so.

I consider myself duly reminded, and I hope you do too.