South Florida Sun-Sentinal Crime reporter Eileen Kelly is upset with some motorcyclists.  She recently penned an article titled, “Hey, you on the motorcycle on I-95: That’s not your own personal lane.”  In it, she scolds certain motorcyclists.  Apparently, some motorcyclists have been using a marked buffer zone between the regular travel lanes and an express lane.

What seems to raise her ire mainly is the fact that motorcyclists bypass stopped traffic.  She complains:

“Traffic is clipping along on I-95 and then seemingly out of nowhere the landscape ahead is a vast sea of red brake lights. But not all travelers are stuck in traffic hell: Some motorcyclists look at the interstate’s latest upgrade — the creation of express lanes, which are set apart with a nice 3-foot-or-so buffer — as a VIP lane.

They’re bypassing traffic jams with gusto, thanks to this large buffer zone meant to separate the regular and express lanes.”

But you may want to ask yourself, why is it illegal?  Is it really more dangerous for a motorcycle to use a marked divided section of the road to move through stopped traffic?

Even Florida’s own statutes firmly place motorcyclists in the category of vulnerable road user:

Florida Statute 316.027(1)(b) “Vulnerable road user” means:
1. A pedestrian, including a person actually engaged in work upon a highway, or in work upon
utility facilities along a highway, or engaged in the provision of emergency services within the
right-of-way;
2. A person operating a bicycle, motorcycle, scooter, or moped lawfully on the roadway;

So if a motorcyclist is a vulnerable road user, why wouldn’t the state of Florida want to reduce the risk to motorcyclists and make this marked portion of pavement available to motorcyclists?  Or in the alternate, treat motorcycles as other congestion and pollution-reducing vehicles and allow them to use the Express Lanes like other exempted vehicles?

But there’s a problem.  Some might point out that for a motorcyclist to be considered a vulnerable road user, the motorcyclist must be operating a motorcycle lawfully.  And, under the current Florida statute, they would be correct. 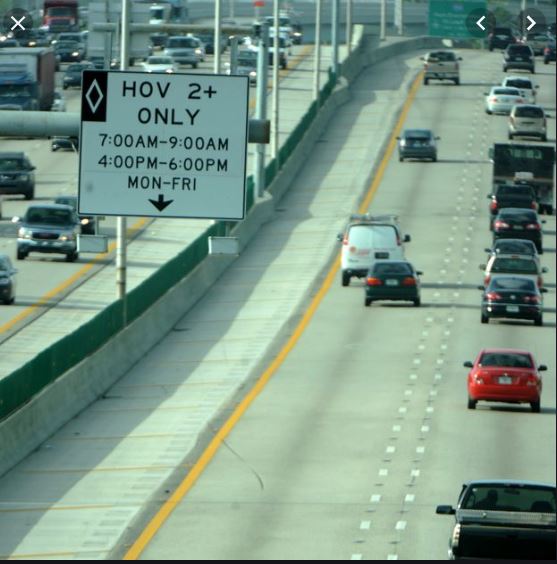 Many states permit motorcycles to use HOV lanes at all times. Photo credit: South Florida Sun-Sentinel

Why is it illegal?

But once again, why is operating a motorcycle in that zone illegal?  On its face, it would seem that having a motorcyclist in a marked zone moving at a reasonable speed (let’s say no more than 15 – 20 MPH) past stopped traffic would be safer than sitting in that traffic waiting to be hit by an inattentive driver.

But the tone of Ms. Kelly’s article seems upset that riders can continue to move while automobiles may not.  Is this her real reason for being angry at motorcyclists?  Or, could there be other reasons motorcyclists aren’t permitted to use that marked portion of the roadway as well?

But, Florida’s Express Lanes are somewhat different.  Their Express Lanes allow any road user to use them, but at an increased cost to the road user.  The cost increases with the amount of traffic on the road at the time.

Could it be that Florida wants to get the increased revenue from both cars and motorcycles?  Is Florida merely making an Express Lane for those who can afford the increased price and generate revenue?  Doesn’t that seem contrary to road user taxes whereby road taxes are used to build and maintain roads for all road users?

To know, we’d have to look at the funding sources used to build these Express Lanes.  And, it turns out the funding is no different.  According to the Center for Innovative Finance Support of the Federal Highway Administration, which is a branch of the Department of Transportation, traditional funding sources were used.

They stated the following sources: 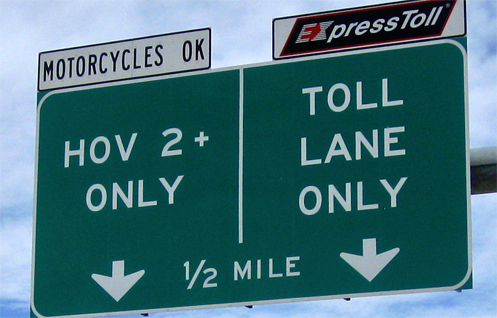 But, there is a glimmer of intent to reduce congestion and pollution in Florida’s Express Lane plan.  According to Floridaexpresslanes.com, certain vehicles are exempt from the tolls or only have to pay the regular toll when using the Express Lanes.

By choosing to exempt these vehicles, the State of Florida is presumptively acknowledging that these types of vehicles reduce congestion and pollution.  What does it take to get motorcycles included in their list?  It’s not rocket science.

Motorcycles do all of the above.  They both reduce congestion and the amount of pollution emitted.  Why is this so difficult?  If bikes are allowed in the Express Lanes with similar exemptions, we wouldn’t even have the issue that Ms. Kelly complains about.  It’s unfortunate and silly.  Why can’t state officials figure this out?

Allowing motorcycles in the Express Lanes is safer and better for all involved.  But at least in the eyes of one crime reporter, motorcycles should have to sit in traffic, just like her.