This is how you can make your city more motorcycle friendly

Even if you’re not a Scout – Boy or Girl – you could do a good deed for the motorcyclists and bike shops of your town or city. Consider this: what is it that might convince a significant number of the people around you to take up motorcycling?

Yes, the feeling of freedom, the thrill and the joy of the open road, etc etc. Those things are important but they’re also a little tenuous; it’s difficult to describe them to someone in a convincing way. Believe me, I’ve been trying for four decades. Here, on the other hand, is something that is very easy to get across to just about anybody: a motorcycle will make your commute easier and faster, and above all it will mean that parking is suddenly easy, and free. 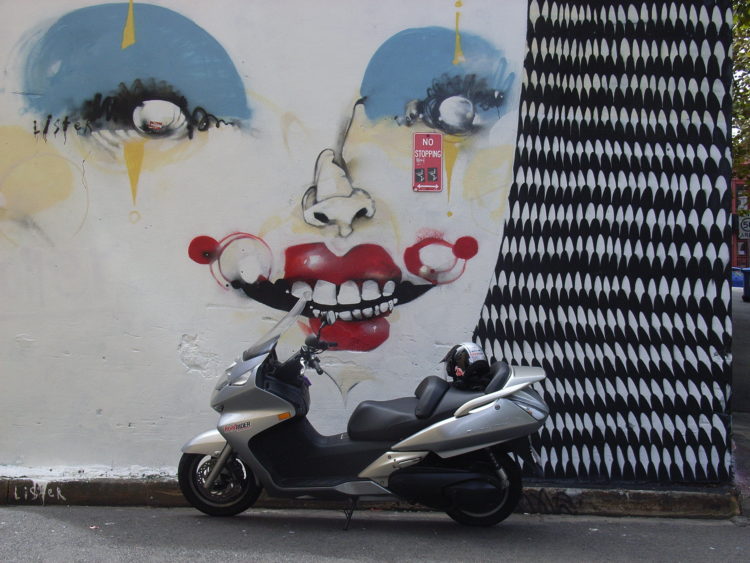 Lack of legal parking can leave riders with little choice but to gamble on law enforcement… and usually lose.

Perhaps you are luckier than we were here in Sydney, but keep reading. You might find that my ideas could be applicable for other projects!

So. Melbourne, our great sister city to the south (and implacable rival) had and has lots of free parking for bikes. They are even allowed on footpaths, as long as they don’t obstruct pedestrian traffic. This didn’t come about by itself; a chap called Damien Codognotto mobilized the motorcyclists of Melbourne and, after a few park-ins and lots of other pressure on the city council, got the parking approved.

Tenuously legal parking because that strip of land belongs to the building owner, not the City. Annoying for pedestrians.

Could I organise something similar in Sydney? Probably not. I didn’t have the time, and Sydney’s riders are notoriously difficult to mobilise except in the obvious way. I needed another approach, or perhaps more than one.

A bit of research yielded the fact that the City Manager, Victor, was a motorcyclist. Not only that, but it was not hard to get him thinking about motorcycle parking as a service the City could offer its motorcycling inhabitants. You might think that that was all I needed, but that’s not how the City of Sydney works. If we were to get a change in parking policy, we would have to convince more than half of the members of the Council and our Lord Mayor.

That’s when Victor came up with the winning cards. Number one, the City already had Action Plans for pedestrians and for cars. Clearly, one for motorcycles and scooters was also required. Number two was the ambition the Lord Mayor – who is female despite the title – had, to model Sydney after the exciting and sophisticated city of Rome.

We put together a basic proposal and Victor presented it to the powers that be including the Lord Mayor. There was enough interest for a sum of money to be allocated to the production of a Motorcycle and Scooter Action Plan, and Victor hired me to write it – after a competitive tender, of course. 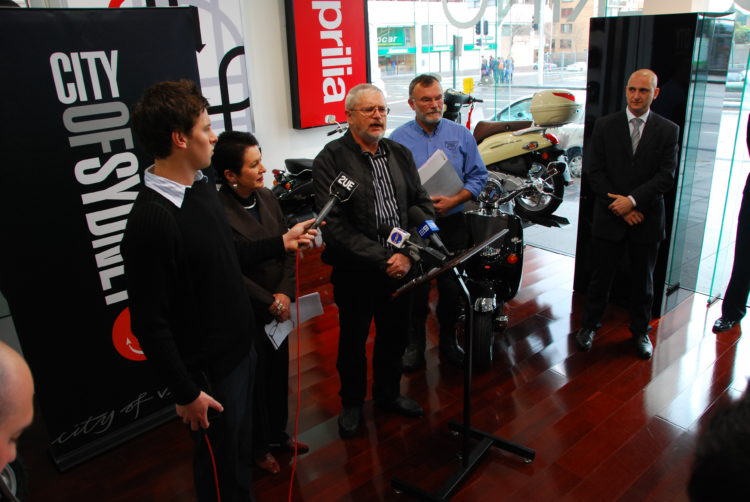 Presenting the plan to the media. I’m at the microphone, and that’s the Lord Mayor to my right.

Don’t think it’s easy to write something like this. You need to consult with every potential stakeholder, and incorporate their ideas and, sometimes, fears into your plan. To give you an example, the Council for the Disabled was immediately concerned that precious footpath space needed for wheelchairs might be compromised. Sydney’s footpaths are narrower than Melbourne’s, so that was a highly relevant point. I would not be proposing footpath parking. Potential parking spaces had to be identified. A city of five million people like Sydney has a lot of calls on its roadside space. There has to be room for buses, Post vehicles, delivery trucks, emergency vehicles and no end of other road users. Allocating any room at all for motorcycles would be difficult if we took away space from others. So we set out to find spaces that were otherwise free. You’d be amazed how many corners there are in a big city which will accommodate two or three bikes. 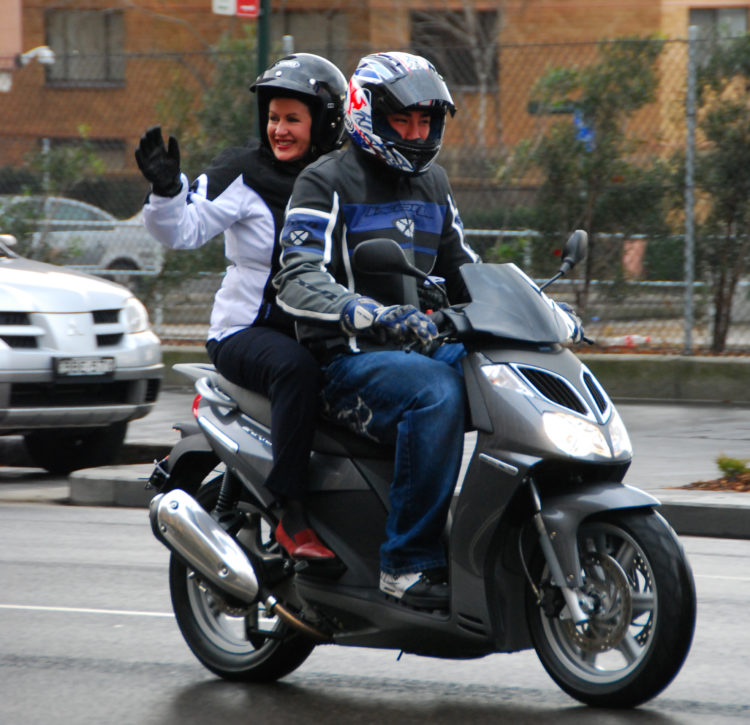 After the presentation, the Lord Mayor enjoys her first-ever scooter ride.

But that wasn’t going to give us nearly enough spaces to even begin to match potential demand. Here, a peculiarity of Sydney’s parking allocation came to our aid. Car spaces here are not marked out. The reasoning is simple – a Landcruiser takes up a lot more room than a Smart car, so standard spaces would waste precious kerbside room. In Sydney you park, then get a time-stamped ticket from a machine and display that in your car. Simple and effective.

Could we adapt that to bikes and scooters? After all, there is often a bit of room between parked four-wheeled vehicles, just right for a two-wheeler. The problem was where to display the ticket to protect it from rain and being ‘borrowed’. In the end I just proposed to Council that motorcycles be allowed to park among cars, without paying.

That might have seemed a bit bold, but Council accepted the argument. We got our parking, and once Councillors saw how rapid the parking uptake was, they also permitted the occasional car space to be turned into parking for a dozen or so bikes. It was a win-win: improved traffic flow in return for free parking.

You can do the same thing in your city. It won’t be precisely the same process, but I’ll get that there is a process that will work, wherever you are. Give it a go.

My thanks to Lord Mayor Clover Moore, Victor and the Motorcycle Council of NSW.