You learn something every day,” as the Goon Show’s Eccles said when he was assured that he didn’t have to take his clothes off to make a phone call. When I chatted with the barman in Garberville CA, I learned that you don’t have to go to Oklahoma or Texas to discover a bit of the history of oil drilling in the United States. You can find some right there in California on what’s known as the Lost Coast. And when I chased it down, I found some of the best motorcycling I have sampled anywhere in the world – more than one kind, too.

Start by heading north from Garberville along the Avenue of the Giants, state route 254. This runs more or less parallel to 101, but you get to see a lot more of the trees from right up close. Just past Weott, both roads cross the South Fork of the Eel River. Immediately after the river bridge and under the freeway bridge, turn left onto Lower Bull Creek Flats Road. This is where the fun starts.

We have big trees in Australia, but the redwoods always blow me away. Nice to have an Indian to ride in this country.

You could be forgiven for thinking that you’ve dived into prehistory as you roll into Humboldt Redwoods State Park. This is somewhat less tidy than the Avenue of the Giants, but even more impressive for all that. Truly giant redwoods lie where they’ve fallen among their standing brethren and their root balls reach as high as many trees in other forests. Take the short turnoff to the left that takes you to Rockefeller Loop. It’s mainly a trailhead, but even if you just stand and look for a few minutes you’ll find it worthwhile. 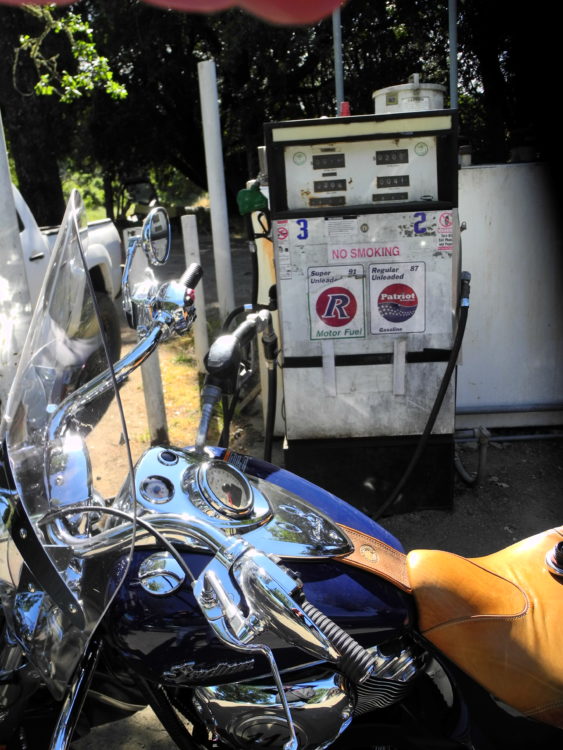 Yes, there’s fuel at Honeydew but you may need some help with the pumps.

Back on our route, it’s now called Mattole Road after the river it meets at the tiny community of Honeydew down in the valley. But there are a lot of crazy corners before then, admittedly on a road surface that sometimes resembles crazy paving… take care! I was on an Indian and the bike just rode over the bumpy, torn surface. Honeydew offers sustenance for the bike and your stomach – my hamburger was excellent – and it’s worth stopping to take in the calm atmosphere. Have a chat to the people in the store; they’re good value. There’s a campground just down Wilder Ridge Road from Honeydew, as well. This valley is sheltered by the King Range along the coast.

Honeydew is also where the roads from Rockport to the south and Redway to the south-east join with our route. I think they’re both a mixture of tar and gravel, but I’m not absolutely sure. Our route is all tar. Mattole Road now follows the eponymous river downstream to Petrolia, and here’s where you can find the plaque that will tell you about the original drill site for oil, the first in California. It’s about three miles out of town on the north fork of the Mattole River; the map suggests that you could get there on North Fork Road, but I wasn’t that keen.

Apart from its name, this is the only indication that Petrolia has played a role in history.

There’s a small motel and a General Store at Petrolia, but there doesn’t seem to be any petrolio at Petrolia. Leave town by way of Front Street, which soon becomes Mattole Road again, and you’re heading into the true Lost Coast. Not that you’re in the wilderness, but it’s lonely country with few signs of humanity apart from the road itself. That follows the coastline north with sweeping bends which may tempt you to exercise the right wrist a little more than usual. You will, of course, resist the temptation. 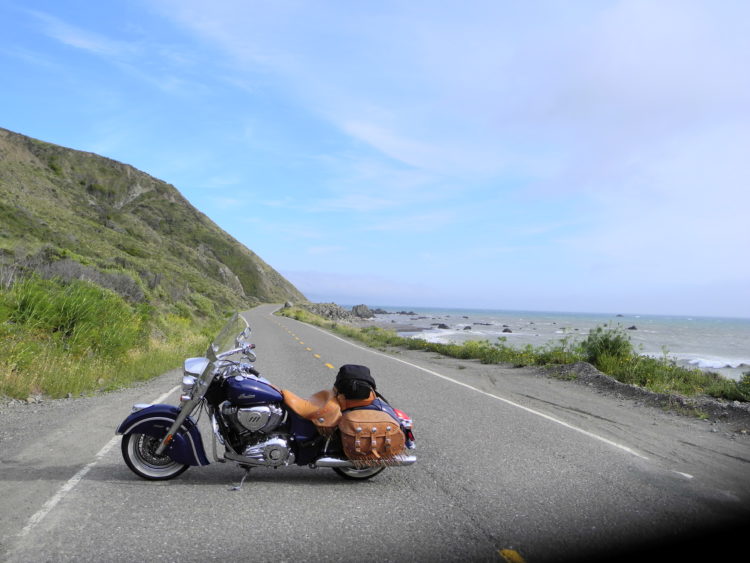 Traffic along Mattole Road is what you might call light. Or nonexistent.

One of the landmarks is Devils Gate, but don’t look for anything terribly diabolical. The road runs between the inland ridge and a rock on the beachside, that’s all. A little further you will catch a glimpse of Steamboat Rock, well out to sea and well named. There’s a small gravel pullout if you want to get out of the traffic to take a relaxed look. Er, except there’s no traffic. Terrific. I understand that the road is subject to morning fog, like pretty much all of the coast, but other than that it’s just… delightful.

You’ll see a farm on the right just before Cape Mendocino, where Mattole Road leaves the coast and turns east and then north. This is yet another kind of motorcycle heaven: not tight and bumpy like the road into Honeydew, nor swoopy and fast like the stretch along the coast but a collection of sometimes quite technical corners which will absorb all of your attention. Or it had better. The Bear River waits below if you let it lapse. 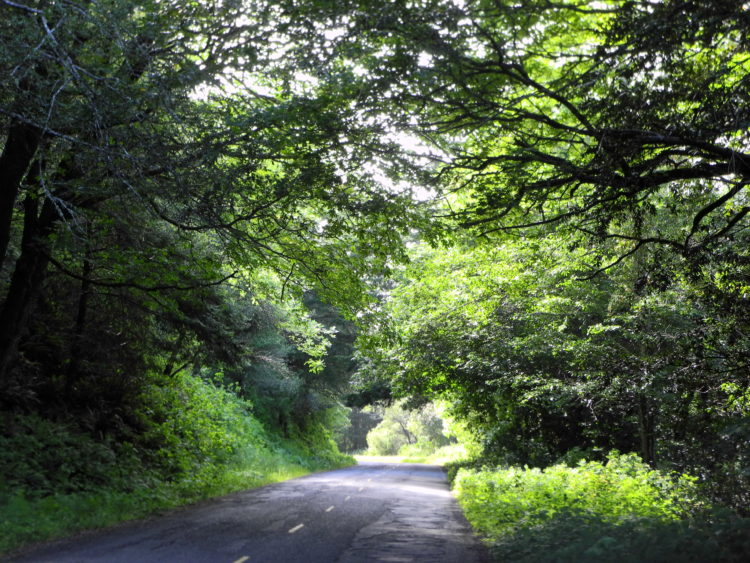 A beautiful road through the most beautiful greenery… but beware those corners!

Mattole Road finally comes to an end in Ferndale, having provided us with almost endless entertainment from the Rockefeller loop turnoff. Should you be looking for some off-tar riding, it’s out here everywhere, on both sides of the tar.  I stayed and ate at the Victorian Inn, a little above my usual price range but a wonderful experience. They have a good range of local craft beers in case that sort of thing interests you. Like me. 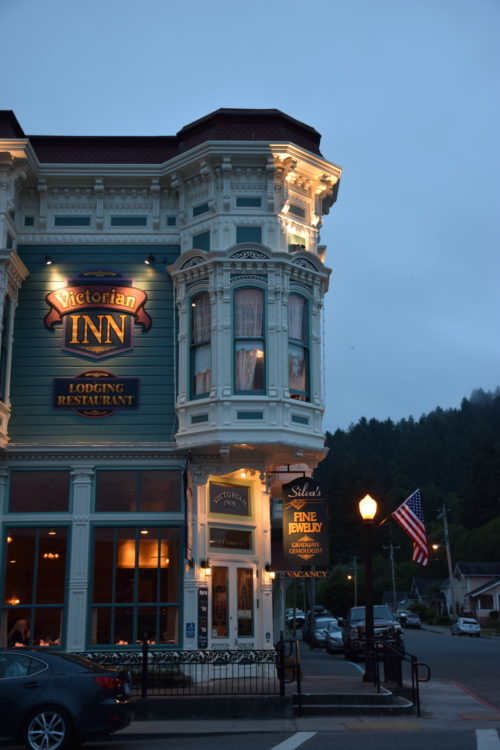 The Victorian Inn, Ferndale. Pricey but pleasant; treat yourself for one night!

If this is the Lost Coast, can I please get lost every day?