Giant Loop’s done it again! The innovative Oregon company is now first-to-market with a new product that’s never been mass-produced before, a seat top tent for adventure motorcycles. It’s called the Expander, and it’s available for pre-order immediately.

The idea of integrating camping capacity with a motorcycle has been around for a long time, probably starting with the earliest adventurers who realized a sidecar could be made to work as sleeping quarters. More commonly, the idea of a pull-behind camper trailer is an extremely common sight in summer touring season, with Gold Wing riders and other folks on big-bore bikes towing these from campground to campground for the ultimate wilderness experience. You also see some ADVriders using their bike as a tie-off point for a hammock, and I’ve even seen a one-off custom bike build that had a monocoque chassis and integrated hard camper shell on the back.

Every one of these solutions has a problem: the pull-behind pop-up trailers are heavy and clumsy. Same goes for the sidecar. The hammock solution can result in a late-night tipover, and the hard camper shell is just asking to be blown off-highway in a crosswind. That’s where Giant Loop’s new seat top tent comes in.

According to Giant Loop, the new Expander seat top tent offers considerable living space, while packing up to a tidy, compact package. The presser says the tent “mounts to virtually any adventure touring motorcycle, providing 100 square feet of hazard free living space while deployed safely off the ground.” Just the thing if you want to get off soggy, bumpy terrain, or want to avoid snakes and other crawly critters. 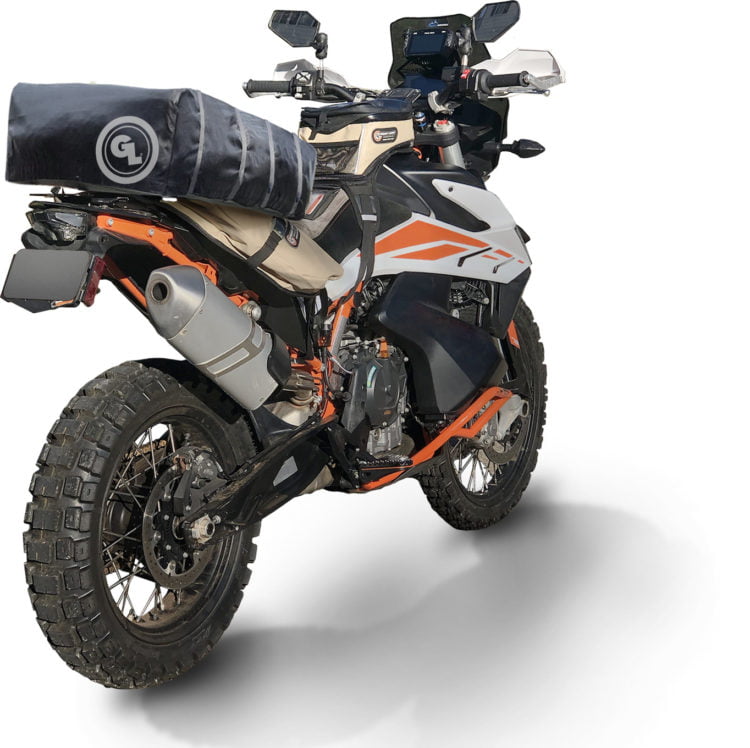 It all packs up to a tidy package. Photo: Giant Loop

The press release says the Expander is made in the USA, with tubular and extruded titanium framework, ladder and supports. The tent uses ultralight Vapor™ fabric, which allows it to pack into a 6″x18″x18″ case (“about the size of a box of Voodoo Donuts,” says the presser).

Fussy owners can upgrade to one-click remote-controlled deployment and packing, which should certainly speed up the camping process. There’s also a patent-pending Dyneema®/Kevlar® predator barrier available, for all the travellers who are afraid of bears, etc.

Alas, such luxury comes at a high price. MSRP for the new tent is $2,999 US, with a non-refundable deposit of $299. It’s available exclusively at giant-loop.com. You can pre-order today, and the press release says estimated first production ship date is in a year, on April 1, 2021.