If you ever want to see how wild Europeans can get on motorcycles, head to Leonberg, Germany this August.

That’s where they’ll be throwing the 14th edition of Glemseck 101, a three-day celebration of bikes that draws tens of thousands of visitors.

Competing at the Sultans of Sprint, Glemseck 101 — photo courtesy of BMW Motorrad/Marc Holstein and Christine Gabler

One of the features of Glemseck 101 is the 1/8- mile track where they hold sprint races, dubbed the Sultans of Sprint.

But in the unhinged spirit of the event, teams don’t just win points for the fastest elapsed time. They also score for style, originality and just plain old craziness. 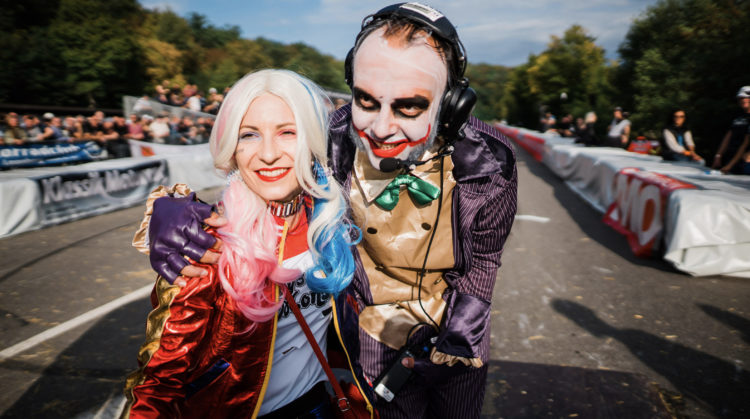 Competing for style points at the Sultans of Sprint, Glemseck 101 — photo courtesy of BMW Motorrad/Marc Holstein and Christine Gabler

That leads to some rather, um, unique customs designs.

Like the VTR Customs-BMW Spitfire. That’s the one which literally spits fire, which you can see in the short video clip.

The Spitfire races in the Factory Class, which began last year. Here are the homologation rules.

“The race bikes are powered by a 4 stroke engine air or water cooled. No limit regarding engine capacity but the tuned bike has to respect a power to weight ratio limit which can not be exceeded.”
– Glemseck 101 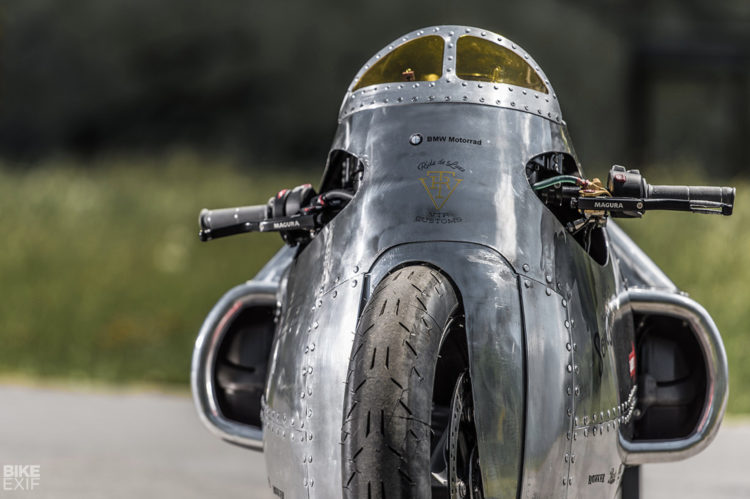 The Spitfire is a new BMW R 1200 R, donated by BMW to Swiss outfit VTR Customs specifically for the Sultans of Speed event.

It will be ridden at the sprints by Amelie Moosender, and thank goodness it’s just for 1/8th of a mile at a time, because there’s precious little to hold her on top of the beast. 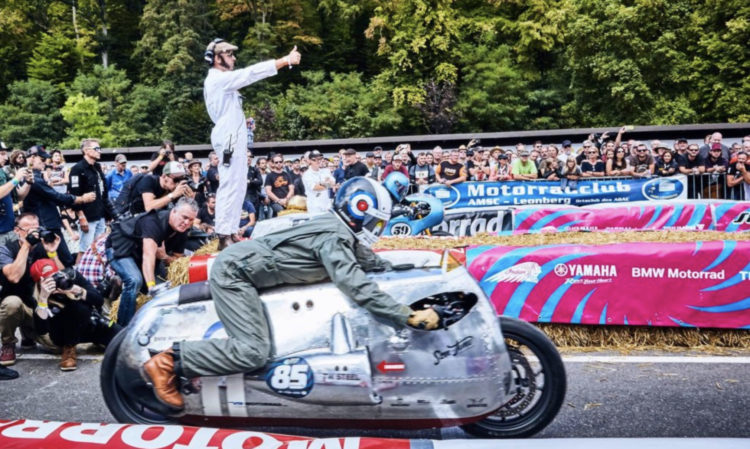 Company owner Daniel Weidmann and designer Cello Brauchli hand manufactured all of the metalwork. They added ten horsepower — from 125 to 135 — by freeing up the air intake and exhaust. 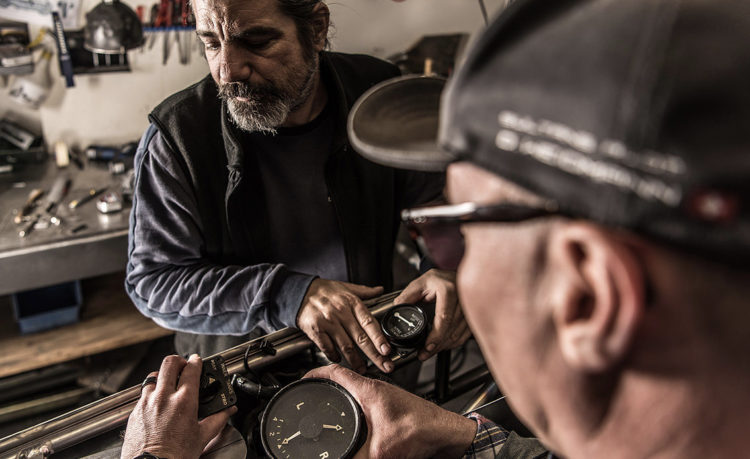 Those flames – style points! — are controlled by a cockpit switch which turns on an ignition coil and sparkplug in the exhaust system, and is fed by a fuel injector nozzle. The system is turned off for actual racing, though. 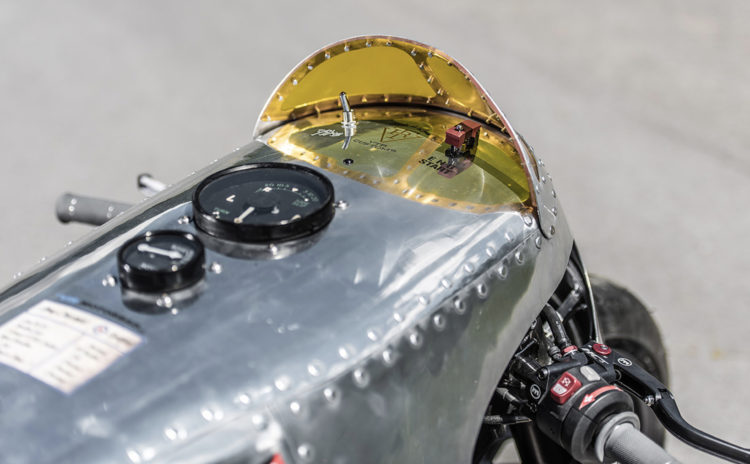 For stability, the R 1200 R has been lowered and lengthened. The rules limit the lengthening to 20% and most bikes do that by adding a longer swingarm. But the BMW’s shaft drive complicates things, so Weidmann and Brauchli stretched the front frame instead. 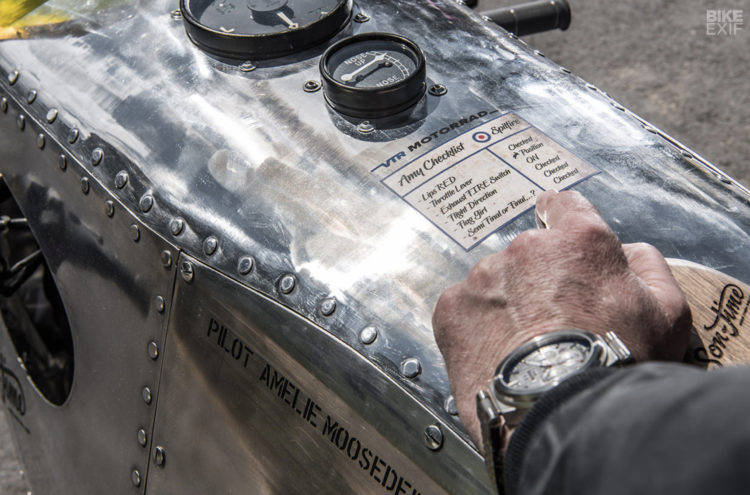 Checklist for Amelie Moosender plus those vintage Spitfire dials on the VTR Customs – BMW Spitfire — photo courtesy of bikeexif.com

They dropped the bike by chopping 30 cms (nearly 12 inches) off of the forks, while still meeting the minimum permitted 3.5 cms of travel. 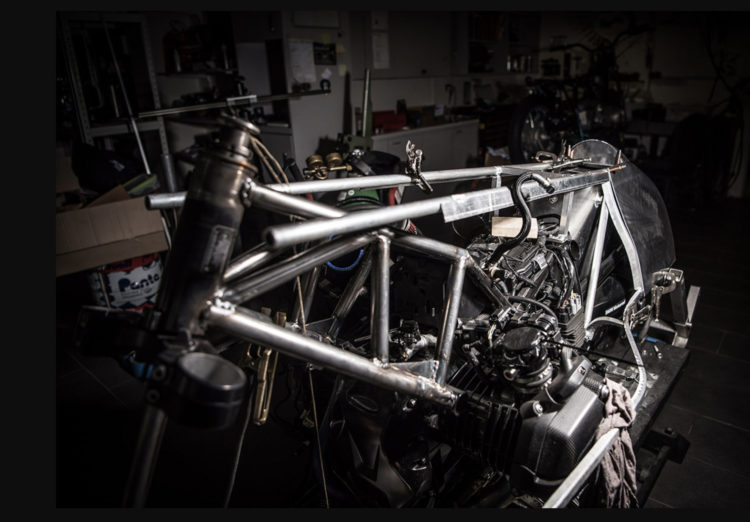 Under the skin of the VTR Customs – BMW Spitfire — photo courtesy of bikeexif.com

True to the Spitfire name, the cockpit dials are actual spare parts for the WWII-vintage Supermarine Spitfire fighter plane. And Moosender has the RAF roundel on her helmet. 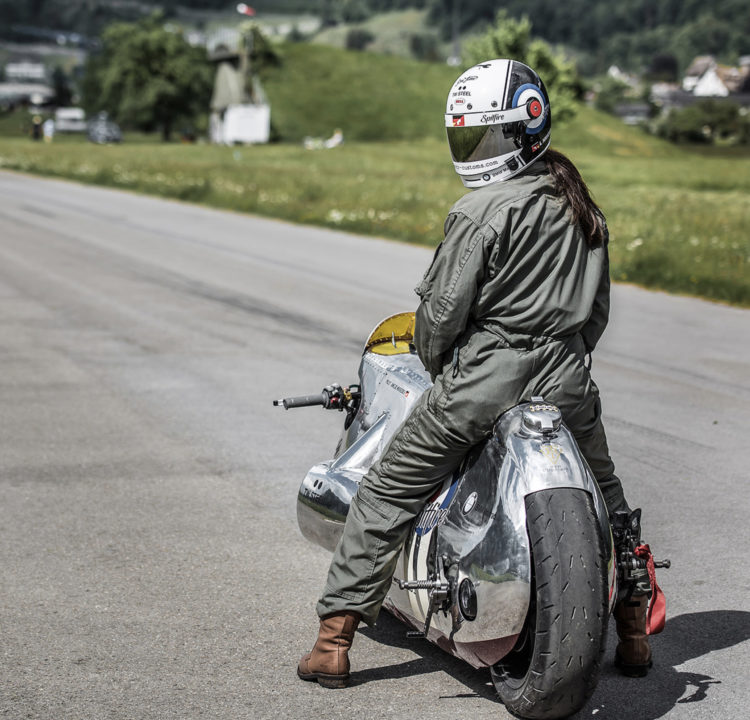 VTR Customs will have two machines at the Sultans of Sprint this year — the second is a customized R 80 RT police bike. It’s pretty wild too, but maybe not as as the wild the Spitfire. 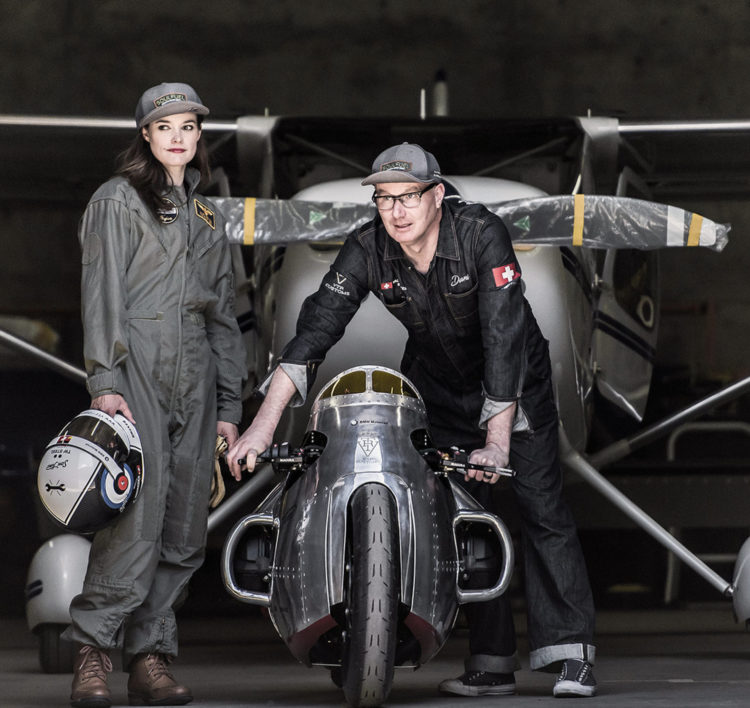 Is This the New (Old) Batcycle?