In Australia in 1982, the Corporate Underwriting Group in association with W D Scott & Co presented a report commissioned by Australia Post into accident prevention and staff safety. The report pointed out that “riding a motorcycle is the most hazardous daily task that an Australia Post employee undertakes”. Collisions and falls made up 6.8% of all reported accidents, and pedal cycles added another 2.2%.

This was a major problem – Australia Post had several thousand ‘postie bikes’ at the time, mostly Honda CT110s but also Yamaha V90s in South Australia. They commissioned a feasibility study to prepare the ground for a full report to be entitled “Study of loads and load carrying methods for motorcycles and bicycles when used for the delivery of mail”. 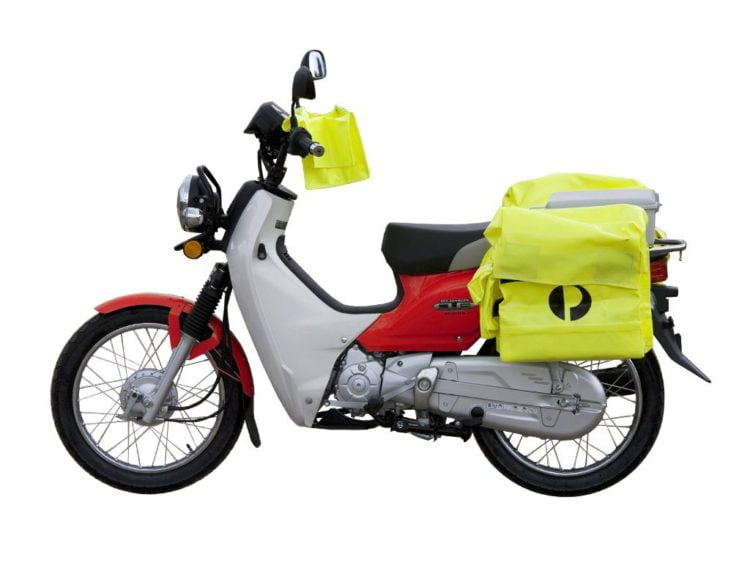 I had been editor of BIKE Australia, a monthly motorcycle magazine, and I bid for the contract and was awarded not only the feasibility study but also the full report. All in all, it took over a year to pull the causes and the potential fixes together. I handed the bicycle part of the study over to someone from the Bicycle Institute of Victoria, and started to look at the motorcycle problem.

Pretty dry so far, right? Well it got a bit more interesting. Honda was selling more than a thousand CT110s to Australia Post every year, so they had a direct interest in making them safe for postal delivery workers or ‘posties’. Three Honda engineers flew out from Japan and were loaded into a Toyota Landcruiser, which then followed a postie on his usual delivery round in the Dandenongs, a range of fairly steep and overgrown hills near Melbourne.

After an hour or so, one of the engineers tapped the driver on the shoulder and asked him to call off the pursuit.

“You have seen enough, have you?” said this bloke. 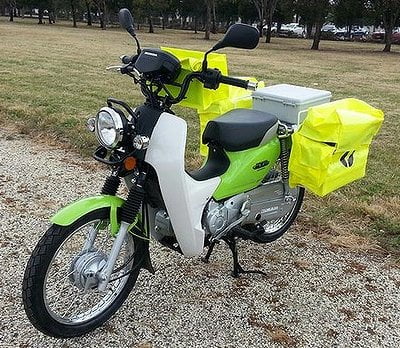 The latest version of the postie bike, now being replaced by electric bicycles.

As anyone who’s ever ridden a CT110 or one of the bikes from the same family will know, they will go just about anywhere. They are by no means sophisticated, but they are light and nimble and it doesn’t take long before the rider realizes that he or she can climb slopes and slip through slots that would defy just about any other motorcycle short of a trials bike. So that’s what they do, and watching them on their familiar rounds can be quite an experience. As the Honda blokes found out.

I followed quite a few posties, and I wasn’t always sure I was actually seeing what I thought I was. They were good, but more than that they were motivated – by two things. One was the ‘early fly’ which meant that they could go home when they finished their rounds. The other was a sense of dedication.

“We’re the good guys,” explained one postie. “We bring letters and parcels, we wave hello, we check up if a granny doesn’t clear her letterbox for a couple of days, we let the cops know if something doesn’t seem right in a house somewhere.” 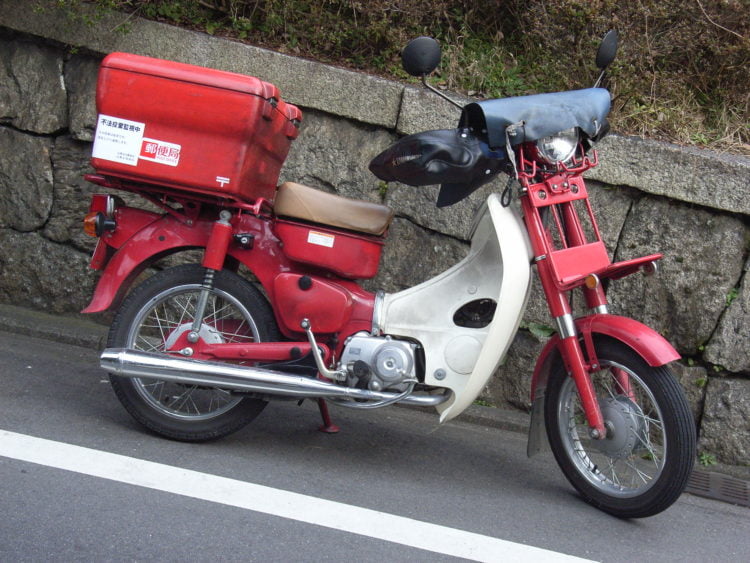 A Japanese postie bike, based on the Australian design. I don’t like that front carrier!

At the time, posties were not allowed to ride on footpaths, but they all did. “Yeah, it’s not a problem. The cops can see that we’re on their side. We’re the good guys. We don’t even get hassled for not wearing helmets.” Helmets were often thrown into bushes and retrieved before the riders returned to the post offices. That was a problem, of course, and accounted for some of the injuries they sustained. I addressed that in the final report with a simple enough fix.

One difficult statistic was the high rate of crashes in South Australia, where posties were riding the less powerful Yamahas and where rolled curbing – a smoothly curved concrete curb – was standard, rather than the 90 degree curbs in other States. I saw the answer the first time I went out with a postie – he hit the curb at speed and at 45 degrees. The concrete just needed to be a little bit slippery… 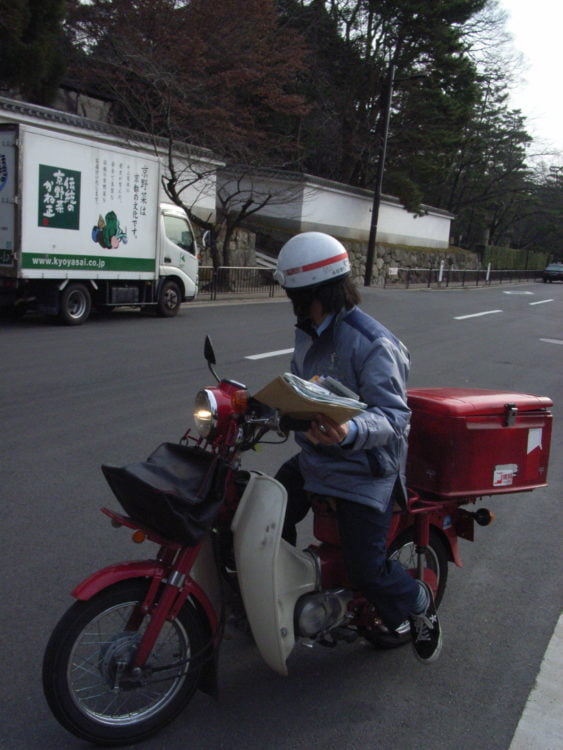 Another look at the Japanese postie bike in use. That does not look balanced front to back, to me.

In the end the problems turned out to be consistent and fairly simple. The postie bikes had ‘delivery bags’ or baskets slung out in front of their handlebar and therefore the steering head, which sometimes held two or more kilos of mail. I moved those behind the ‘bar, reducing the tendency of the ‘bar to pull the bike around. The bikes were also overloaded, which meant that often the rear shock absorbers were fully compressed by the time the postie and the mail were aboard. That was more difficult to fix, but a system of ‘depot boxes’ where a van dropped off mail part of the way along a delivery route made it much less of a concern. On really difficult delivery routes, I recommended equipping the bikes with aftermarket shock absorbers.

Clearly the main factor that made the bikes difficult to handle and likely to crash was the total weight they were carrying and where they were carrying it. Instead of the heavy leather bags, slung out well beyond the sides of the bikes, one of my consultants and I designed what we called the Bikepak System with lighter bags made from a strong synthetic material and a much lighter frame, which also placed the bags much closer to the bike’s frame. We added a central bag to keep much of the weight in the middle. 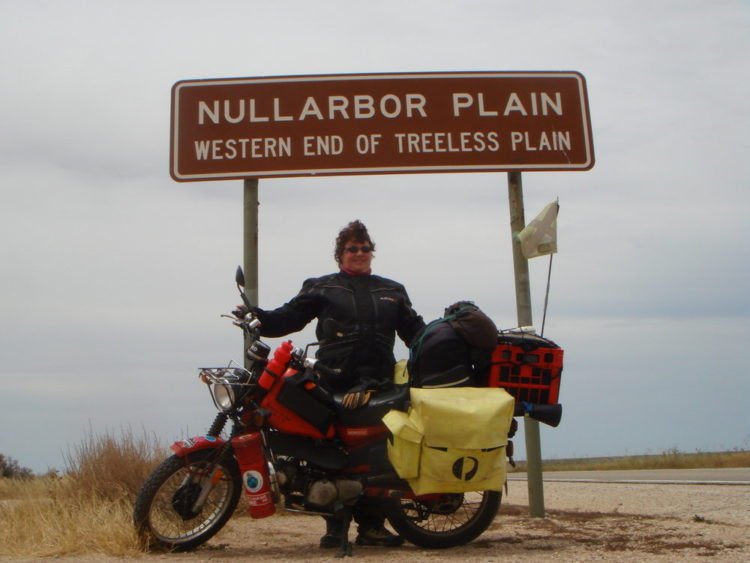 That’s Jacqui Kennedy who has ridden well over 50,000km on her second-hand ‘postie’, raising money for charities. Overloaded? I look the other way…

And finally, I recommended more, and more targeted, training. I never did find out what effect the changes had, but they were used until quite recently when Australia Post began to switch to electric bikes, and the basic principles are still being adhered to.

(My thanks to Grant Roff, who helped with the motorcycle study, Jack Burger who designed the racks and bags and Alan Parker who covered bicycles.)